About that curse, and those few drops of blood by Dale Borman Fink
50
(55 Stories) 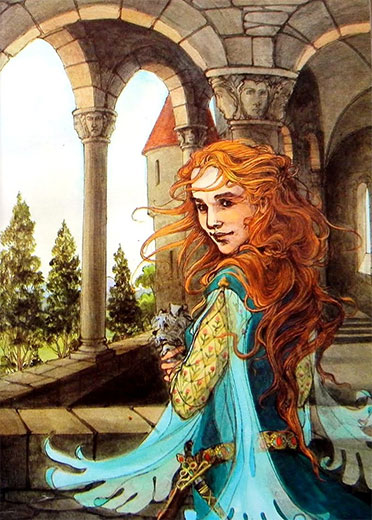 Thinking about fairy tales calls to mind one of my favorite moments as a professor at Massachusetts College of Liberal Arts. I loved teaching a Children’s Literature class to young men and women (and the occasional middle-aged or older person). The course was part of the Creative Arts core curriculum, and there was no canon of works I was expected to cover. I had the freedom to choose among works for younger readers of any genre–poetry, picture books, chapter books, graphic novels, young adult fiction–so long as they were written originally in English. Even though my home base was in the Education Department, the class did not aim to guide future teachers in making use of children’s books in their classrooms. I could do what I chose, so long as I shaped the course to meet the goals of the Creative Arts core, which were, broadly, to help students think about the role and impact of the arts in our society, to help them uncover their own relationship to or reaction to specific works of art, and to help them become more analytical in examining the elements that artists deploy as they bring their works to fruition.

in spite of the King's precautions, the princess, who is described as a free spirit, stumbles into...someone working at a spindle. The spindle draws a few drops of her blood...

To accomplish these goals, I chose a mixture of titles that most of them were familiar with and other works completely unknown to the vast majority.  In regard to the stories they had encountered previously,–whether it was Goodnight Moon, Where the Wild Things Are, or a fairy tale, my hope was always to help them go deeper, to reread the works (and study the illustrations) with fresh eyes a more mature mind, and a more analytical perspective.

I did not use many secondary sources in this course, but when it came to reading fairy tales, I felt I could not ignore the giant contribution of the psychoanalyst Bruno Bettelheim, who published his  masterful book, The Uses of Enchantment, in 1977. I did not assign the book: I wanted my students to reserve their (often limited) study hours to read the actual children’s books. In class I handed out excerpts and we discussed them, such as the following paragraph.

The fairy tale simplifies all situations. Its figures are clearly drawn; and details, unless very important, are eliminated. All characters are typical rather than unique…the figures in fairy tales are not ambivalent—not good and bad at the same time, as we all are in reality…One brother is stupid, the other is clever. One sister is virtuous and industrious; the others are vile and lazy. One is beautiful, the others are ugly…Presenting the polarities of character permits the child to comprehend easily the difference between the two, which he could not do as readily were the figures drawn more true to life, with all the complexities that characterize real people. (pp. 8-9)

Once having introduced them to Bettelheim’s way of thinking in psychological dimensions about the struggles represented in fairy tales, I turned them loose in their small groups of five (groups that I created and used for part or all of every class meeting) to work together on interpreting two fairy tales they might remember from when they were younger.  I chose “Hansel and Gretel” and “Sleeping Beauty” for my students to analyze, because Bettelheim included them both in a section of his book where he dissects eight or ten of the classic tales in considerable depth . I found his treatment of these two tales to be clear and persuasive, and I thought that if I provided my students with some guiding questions, they could arrive at some solid interpretations of these stories on their own.

The students all routinely brought their laptops to class, and I provided online links for them to read aloud these two stories at their separate tables during class, and then to discuss them, following along with my guiding questions. That memorable teaching moment took place during the small-group discussion of “Sleeping Beauty.”

To appreciate the way our study of this tale unfolded, it may help to first recall the plot of “Sleeping Beauty.” A king and queen give birth to a girl-child, and at the ceremony celebrating the royal birth, 12 invited fairies arrive with wonderful gifts for the baby. But a thirteenth fairy–who was not invited–attends anyway, and places a curse on the infant: the girl will prick her finger on a spindle when she turns 15, and this will result in her death. As the girl enters her teen years, the King attempts to make sure that every spindle in the kingdom is destroyed or hidden away. Yet in spite of his precautions, the girl, who is described as somewhat of a free spirit, stumbles into a room where there is someone working at a spindle. The spindle draws a few drops of her blood, but magical incantations from other fairies save her from dying. Instead she (and all the royals and their servants) fall into a deep and long lasting sleep; thus does she become the “sleeping beauty.”  As she sleeps, numerous male suitors attempt to make her their bride, but they fail utterly to penetrate the thick layers of thorns that grow all around her. Only after a prolonged period of rest do the thorns turn to blossoms and a fortunate suitor is able to “rescue” her and become her partner.

My students, in their groups of five, read the story aloud, and then wrestled with my questions, all derived from my study of Bettelheim. The questions included the following:

Whenever I had them start working in small groups, I made it a habit to leave the classroom for a few minutes and visit a nearby stand and get myself a cup of coffee. As I explained to the students from time to time, “It’s not that I need the coffee–it’s more that I want you to see that I’m not around, I want you to realize that he learning process can go forward perfectly well while the professor is out of the room.”

I would return to the classroom, coffee in hand. It always felt rapturous to hear the sound of many students talking, laughing, disagreeing, and appreciating each other’s comments. (The sound of that “learning process.”) I would stop by each group (there were usually five) and pull up a chair, remaining mostly an unobtrusive listener. But I also knew that some groups and some individual students needed me to be a little intrusive–to help them get started, to clarify a question, or just to give them confidence that I thought their insights were valid.

As I made the rounds on that day, most of the groups looked relaxed and like they were having fun, going deeper into the two fairy tales, just as I had envisioned. But as I approached a table of five freshmen, it was obvious they would need support and guidance. I never created the groups randomly; neither did I always sort the students according to grade level,  I used a variety of approaches. But in the semester I am discussing, there were five first-year students (freshmen), and I had created a group just for them. There were two males and three females–all presenting as racially “white” and all “traditionally-aged students,” meaning (as I tried to keep in mind) they had been in high school just a few months ago. They were, after all, taking this course in their very first semester of college.

As I pulled up a chair, one of the young women let me know, speaking almost in a whisper, that they were a bit stuck. “Which question are you on?” I asked the group. “Number three,” a couple of them answered. “So far,” one of the boys said, “we thought of blood being associated with Dracula.,..that was my idea but I don’t know where that gets us in interpreting the story…”  The other boy said, “yeah, vampires don’t really go with witches but that’s all we thought of so far.” Dracula? Vampires? I made sure to not react. I made eye contact with the girl who had whispered to me, and cast my eyes around the group to the other two women. “I have a feeling the girls in this group may have some other ideas about this.”  I got at least one head nod and one suppressed smile. “Matt, Gavin” (not their real names), I don’t want to say anything myself on question number 3 because I don’t want you to feel embarrassed in front of me. But I think if you would be willing to just listen on this one, after I walk away, I’m almost certain that these girls can explain it to you.”

I walked away. It looked like more of that magical “learning process” was taking place within their group. I saw smiles, and maybe even a slight bit of embarrassment–but not in front of their professor.  Members of that group, both male and female, went on to participate in the whole-class discussion that took place after a little while.  Those freshmen probably forgot all about it as soon as they arrived at their math, business, or history class later that day. But for me It was a wonderful moment that lives on.

[A note about the featured illustration. The illustrator, Trina Schart Hyman rescued many of the young maidens of the classic fairy tales from the unfortunate Disney-izing that rendered them as weak, sexless and pretty but pathetic. Ms. Hyman’s works over the course of a distinguished career depicted many of these fairy tale heroines as robust and rambunctious and gave back to them–as seen vividly in this example– their vibrant sensuality.}

15 Responses to About that curse, and those few drops of blood