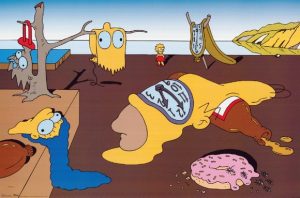 Any half-century anniversary sparks big questions. Even once inattentive high school history students are nudged into a perspective more sweeping than personal status and sentimental relations with peers. Too, self-important Boomers have always had a habit of “scaling up” the primarily personal into generational (and national) significance.

To place a call or send an email to someone you haven’t seen in a half-century can prompt introspective doubt, if not existential angst. Why am I doing this? And why isn’t my voicemail being returned? Did he not answer my first email because it went into “spam” — or, maybe more likely, because his memories of me are of a jerk?

But I’ve changed; I’m not the same person (you say to yourself). And this is likely the last chance to make amends, to show you’re not such a bad guy after all. The secular equivalent of last rites, expiation for your adolescent sins of mental cruelty.

To lapse into the second-person, as I have just now, is to be convinced that my personal experience has universal value somehow. That kind of self-centered conceit is probably what I and my fellow Baby Boomers are best known for.

So the rest of the nation braces for a crescendo of narcissistic nostalgia as the Baby Boom generation celebrates its 50th high school and college reunions over the next couple of decades. 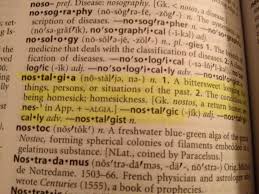 High school reunions are always fraught, but the symbolically significant half-century mark seems especially poignant: the Golden Anniversary, the Jubilee, the mother of all reunions. A total of roughly 75 million Boomers are forced to take stock of their lives — and what these generally well-lived lifetimes have wrought for the country.

Many of my own high school cohorts were absorbed in planning — now over 12 months — for a long weekend of celebration: tracking down contact information for “lost” classmates; creating a reunion website, YouTube videos, and a yearbook (bigger and better than our senior year edition). Now retired, some classmates could — and did — approach these self-imposed duties as if a full-time job.

Typically rich in delicious irony, the high school reunion is a familiar trope in American culture with recognizable narrative arcs: the nerd’s triumphant revenge, the fall from grace of the “most likely to succeed,” and the ladies’ man or prom queen who now comes out of the closet.

And, yes, as if scripted for Realty TV, one of my once macho male classmates at age 60 transitioned — now to return to our high school as a fashionably sophisticated and attractive lady. Had her gender reassignment surgery happened earlier in her life, she acknowledges, a five-, 10- or even 25-year reunion would have probably been too awkward to attend.

Fifty years of mellowing should also mean less keeping score, competitively measuring ourselves vis-à-vis our classmates. Instead, it will be our own youthful selves — now reflected in the collective eyes of our school cohort — who remain the most unforgivably judgmental of the old farts we’ve become.

But what of the “judgment of history?”

Any half-century anniversary — marking the passage of such a big chunk of time — sparks big questions. Even once inattentive high school history students are nudged into a perspective more sweeping than personal status and sentimental relations with peers. Too, self-important Boomers have always had a habit of “scaling up” the primarily personal into generational (and national) significance.

So what about our country — not just me and my classmates — then and now? Is the country better off today than it was 50 years ago? Would my high school class — my generation — be deserving of re-election? Or, like our Boomer President, impeachment?

I can’t help thinking of a “quantum leap” — to steal a notion from the eponymous TV show popular 30 years ago. For most of our lives, time flows incrementally, slowly, gradually, routinely; hourly, daily, even yearly, so intensely personal it’s almost invisible. That kind of time is measured in T. S. Eliot’s tablespoons — or in today’s constant Internet chatter.

But to return, exactly 50 years later, to the very place that our adult lives commenced is not so much coming home again as to experience a shuttering, shocking dislocation. 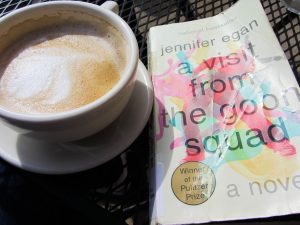 In trying to make sense of such temporal shocks, our generation’s Proust might well be Jennifer Egan in her 2011 Pulitzer-Prize-winning A Visit From the Goon Squad. The Sixties “oldies but goodies” we hear on Sirius are our madeleine, and memories are a bunch of goons — enforcers and intimidators for that deadly gangster known as Time. They are all goons, those now distant moments whose generational sharing defined us as Boomers, when remembered and jarringly juxtaposed with the present: the cadence and phrasing of JFK’s inaugural address, the crackling sound of the moon landing’s “one giant step for mankind,” the Nixonian proclamation “I am not a crook.”

Boom! That’s the shock of a 50th reunion, like a sharp slap to your once unwrinkled face. The goons have arrived, here now at the reunion reception, barely recognizable friends from a half century ago: drinking and laughing and swapping stories and introducing us to their spouses….

A half century! Boom! Just like that, it happened. And now it’s gone. What have we wrought? The goons are here to remind us.

If the America that we Boomers are handing off to our offspring seems far worse than the country bequeathed to us, there are two logical interpretations. The first lies in the nostalgic reverence that inevitably, with age, clouds once clear-eyed empiricism; “good ole days,” viewed through a soft-focus lens and the mendacity of memory, are always a lie. Or, alternatively, if things are indeed objectively worse, then we Boomers have only ourselves to blame: we’re the ones who’ve been in charge. There’s no atonement for those sins.

A retired journalist, Walter Nicklin divides his time between Virginia, Maine, and Europe.  He can be reached at Twitter @RoadTripRedux

Chair For Life
by Betsy Pfau
Thankful
by gz