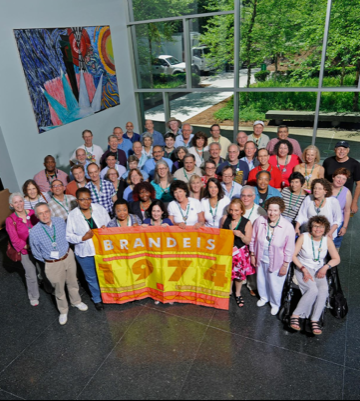 Founded in 1948, Brandeis is a young university with a small, largely uninvolved alumni base, though the university is getting better at grooming their younger alumni.

The Alumni Office knew they had a winner in me right from the start. I used to stop in and visit, particularly after my kids were born. I’d take them to campus to see a show at the Rose Art Museum, eat brownies in the student union, play with their remote control boats in the pond in the middle of my freshman quad. Those Alumni Officers  glommed onto me right away. I never missed a reunion. I was a prime suspect.

I have worked on every reunion since my 15th, co-chaired my 25th, 30th and 40th. The university sets the schedule; the bones are always the same with “Alumni College” (seminars on various subjects, with a separate fee structure on Friday),  some sort of class get-together on Friday night, more general talks by alumni presenters on Saturday morning, an all-class barbecue Saturday afternoon, during which class photos are taken. Saturday afternoon, there is an ice cream social, then each class decides on its own programming. In the evening we have a class dinner, followed by an all-class dance. Sunday begins with a memorial service (our class list grows longer and longer) and a farewell brunch.

Having worked on many of these events, I’ve discovered certain truths. They are more fun if one’s friends show up, but I have made new friends through the years; people I have become quite close with even though I didn’t know or barely knew them as undergrads. One commented that perhaps this is a deliberate point of the reunions (credit this insight to Bill, friend from the 40th). It certainly strengthens the bond to the university and is an unexpected pleasure from the weekend. Kids one might not have had much in common with decades ago grow, mature and now have lived interesting lives, have similar political outlooks, or are just plain fun to be with. It is great to find this out, if only you are willing to mingle a bit and have some real conversations.

Turns out, my dentist is a Brandeis alum. He was working on my mouth while I was working on my 25th, 18 years ago. He told me what he was planning for his 40th during this period. He is good with tech stuff and put out a request to his classmates for old photos from their days on campus. He put them all together in a big slide show, running simultaneously on two projectors to show at their class party. I loved his idea, but knew my classmates wouldn’t respond (this was before Facebook and hyper-connectivity). How could I do something similar? I spent a day in the Brandeis photo archives, going through the tiny, black and white negatives (wearing white gloves, of course) from 1970-1974, pulled photos representative of our years on campus (famous people who came to speak, new buildings dedicated, favorite professors, athletic achievements, theater, our graduation). I had the negatives developed and turned into a video, even “New Faces”, the freshman yearbook (of course I still have it) was scanned and opens the video, which I showed at the Saturday night class party. After the screening, my dearest friend, Christie Hefner made a little speech, saying that I was the heart and soul of the class. I was quite touched. For the next reunion, I added my own photos from our 25th. For our 40th, I had the VHS tape converted to a DVD and played it on a loop during our Friday night party.

I write letters, cajole, call, and most recently, ask for money. I hate asking for money, but that has become part of the task as well. I remind my classmates that rankings of universities are, in part, based on alumni satisfaction, which is judged by how many alumni give money! So that’s my pitch: give $40 for our 40th reunion – just give something! Points for participation.

I confess, it galls me when local people don’t come, even just for the afternoon BBQ. There are many alumni who live in the area and many who stay in touch with friends from their Brandeis days, even get together on a regular basis, but never come to reunions. What’s that all about? Didn’t they meet at Brandeis? Are they not appreciative of the quality education they received? Did they not go on to find good jobs and have fulfilling lives because of the success they found at Brandeis? I am a big believer in giving back to the institutions that created me. Perhaps that is why I remain so involved at my alma mater.

Class of ’74 is a tough class. We were admitted during the time of campus unrest and the shootings at Kent State. We were a small, closely screened class, 415 kids mostly from the East Coast when we entered (there were a few strays from the Midwest and West Coast, but we were oddities). We had lots of students transfer out and in and graduated over 600 in May, 1974. There was almost no orientation and very little class bonding. We broke into our own little cliques. We didn’t have big sporting events to rally around. We were notoriously disaffected.

Twelve days after we arrived on campus, three students and two thugs they picked up along the way robbed a local bank and killed a police officer in the name of the revolution. The guy in charge was caught, but the two girls, who would have been seniors, went on the lam. Suddenly, we had two Brandeis students on the FBI 10 Most Wanted List! They were crazy times. Two months before my 40th reunion, I sat next to one of them at an event at the Rose Art Museum. We chatted before the talk began and I recognized her. Our talk was fascinating. She had turned herself in – to a classmate of ours, who happened to be the DA for Boston at the time – served her time years earlier, and now worked in a rape crisis center and worked on reconciliation and making amends. She had been a full-scholarship student at Brandeis and wished she had been more grateful for that and all Brandeis offered her. I had come full circle and posted about it on our class Facebook page. It generated intense memories from those days.

In chairing my 40th, I tried to ensure that it was fun and interesting. I got the best turnout we’d ever had for a reunion, we had 70 people come back. I was so pleased. We also made our fundraising goal. The BBQ was huge, hot and fun. Here I am with my dear friend Christie, friends since we were 12 year olds at summer camp. 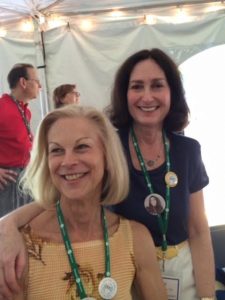 With Christie at the BBQ

We arranged for the afternoon speaker to be Brandeis professor, Eileen McNamara, former Boston Globe writer, the person who started the enquiry that became the Spotlight report on Catholic Church child abuse as seen in the Academy Award-winning movie, “Spotlight”. She is exactly our age, and talked about new media vs. traditional media. Having Christie in our class added to the lively conversation in the afternoon. It was a compelling conversation.

We changed for the evening party, which began with our class dinner in the Faculty Center. Here I am with my best buddy from theater days, Michael. We remain very close friends. 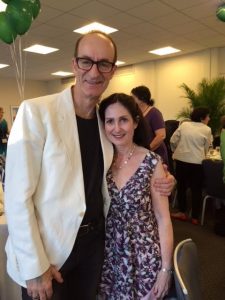 With Michael at the class dinner

Then back to the Great Lawn, under the tent for dessert and dancing. I whiled the night away, dancing with all my friends. The younger kids tried to out-dance us, but not me…this is my speciality and I enjoyed every hot, sweaty minute.

I attended the Farewell Brunch and took the temperature of those who remained. My favorite comment from one classmate, a doctor from Washington, DC who I did not know before was that the weekend, “was off the chain”. I loved that! He said he would definitely come back. We sat at two long tables, so I could table hop and try to talk to everyone (the hostess with the mostess?). That morning, the whole group announced they had decided I must be “reunion chair for life.” Can you hear the big sigh? As I think through my list of classmates, I can’t think of anyone else but me for the job.

10 Responses to Chair For Life