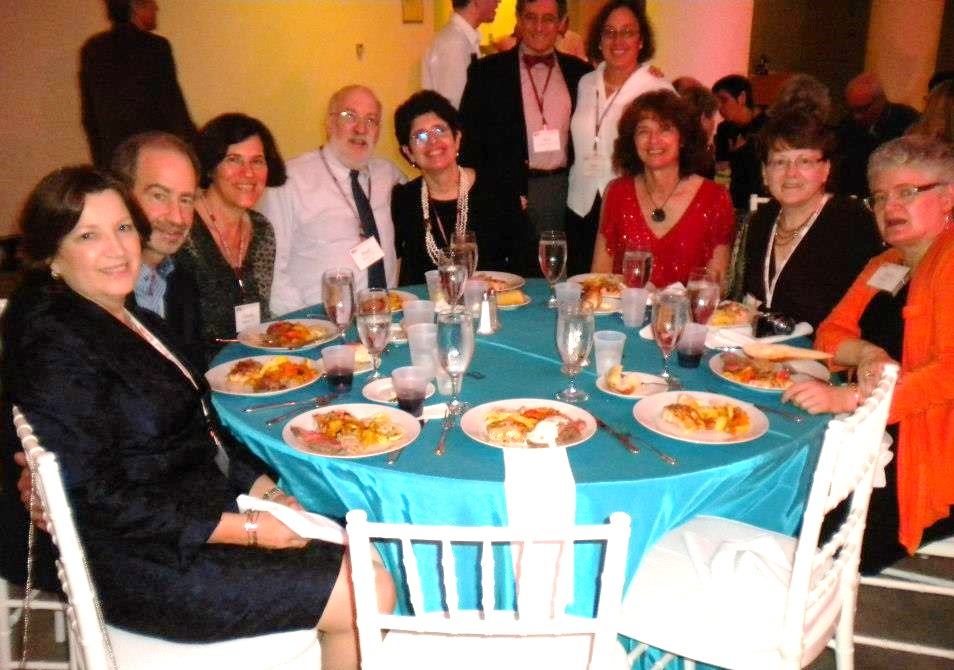 I am a reunion junkie! I love them, and it always makes me sad when friends choose not to attend.

Last month, October 2017, I had two incredible reunions two weeks apart — my college 45th and my law school 40th. I was on the planning committees for both reunions, worked hard to make them as good as they could possibly be, and had a blast at both of them.

Most Harvard-Radcliffe reunions are held in May (formerly June), to coincide with Commencement. The Commencement ceremonies start with an Alumni Procession through Harvard Yard into the Tercentenary Theatre. We march in with class banners, starting with the oldest alumni/ae, while the graduating seniors, by House, stand on either side of our path, waiting to process in after we do. It is very moving, for the young and old alike. However, Harvard claims that it doesn’t have room to hold all the reunions at that time, and so three of them — the 30th, 40th, and 45th — have been relegated to the fall. Instead of Commencement, we get a football game, which I of course do not go to. However, now that my class has had our three fall reunions, we will never have to do that again!

Our 45th reunion, like most Harvard reunions, was spread out over four days, starting with dinner and drinks on a Thursday and ending with brunch on Sunday. There was alcohol at pretty much every event. Even the Sunday brunch had bloody Marys and Mimosas. But that’s not why it was fun. It was the amazing people in my class. Many of those who attended were friends I made freshman year, still my closest friends even if we only see each other every five years. Others were people I didn’t know in college, but met at previous reunions, or even met at this reunion, and it was great to get to know them, with the foundation of that four years of shared experiences we had back in college. Here is a picture of all the classmates who attended this reunion. 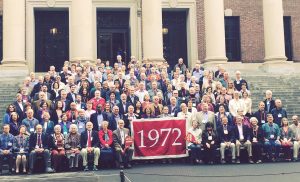 Can you spot me? I’m directly above the 9 in the banner, wearing a purple jacket.

One afternoon there was a women’s discussion group, where we talked about what it had been like for us in college, with the four-to-one ratio of men to women, and the move to co-ed dorms in the middle of our college years, and then moved on to what life is like for us now. Another session had some TED-style talks by classmates with expertise in various subjects, and one of the speakers commented that this was the first time he had ever given a talk where everyone in the audience was the same age as he was. It’s like, we all get each other! What a wonderful feeling of community!

Other than the 25th, when my whole family came with me, I have gone to all my reunions by myself. It’s more enjoyable when you don’t have to worry about whether someone else is having fun or not. And I always room with Kathy, who was my roommate sophomore year in Comstock Hall. We have such a great time together! At the end of each day we come back to our room, and lie in our beds chatting and giggling about the day’s events and the people we talked to. It’s like being nineteen again!

The 25th reunion, to which I brought my family, was more elaborate than all the others so far. It lasted an entire week, and featured a kids’ program with Harvard students as counselors. Most people brought kids and spouses to that one. There were a lot more activities, of course, since it was so much longer. The highlight of that reunion was Class of ’72 Night at the Boston Pops. We had the entire Boston Symphony Hall just for us, with the adults on the main floor, and the kids with their counselors up in the balconies. We were taken there in buses, after having dinner on campus. There were fifty buses traveling in a caravan down Memorial Drive. I was lucky enough to be in the third bus, and as we turned the corner to cross the river into Boston, I could see the line of buses stretching off into the distance. All traffic was at a standstill. There were Cambridge and then Boston police at every intersection stopping the cars until we all went by. Only about a four-mile drive, but Google maps tells me it would take 18 minutes with the usual traffic. Since we didn’t have to stop at red lights or anywhere else, it probably took us six minutes! It was my one glimpse of what it would be like to be famous and/or powerful, and I liked it!

Reunions at UC Davis are quite a bit lower-key. For one thing, they are a lot smaller. In contrast to my college class, which had 1500 members (1200 men and 300 women), my law school class was 150, small enough that we actually all knew each other, to a greater or lesser degree. Not everyone was the same age, because some people went to law school right after college, some took a couple of years off, like I did, and many had a whole other career before deciding to become a lawyer. Even so, we still had that shared experience of three years of briefing cases and spotting issues together. And talent shows and moot court arguments and intramural basketball. Attendance at reunions has been erratic in the past, but this time my fellow committee members and I worked hard to contact every member of the class for whom we had an email address or phone number, to try to get a good turnout. And we did get 31 classmates, the most that we’ve had at any reunion.

The law school had one schedule for all the reunion classes, starting at 3:00 for class photos, hors d’oeuvres and tours of the recently-expanded law school building, and culminating in a dinner with speakers and a slide show. Our committee decided that was not enough, so we planned events just for our class before and after the main events. We began the festivities with a lunch at a private home in Davis. I got there early to help set up, and then I was stationed at the front table to greet people and give them their nametags. This turned out to be my favorite part of the reunion, because as I saw each person arrive and approach the table, I had to figure out who they were. Some of them I hadn’t seen in forty years, and most of the rest I hadn’t seen in fifteen or twenty. Only a few had been at the reunion five years ago. Yet in all but one case I was able to recognize them and greet them by name when they reached the table! It was quite a mental workout, but very satisfying.

After lunch we went over to the law school for the all-class activities. Since the law school is relatively young, with its first graduating class in 1969, we were the second-oldest reunion class. The class pictures were taken in descending order of age, so we didn’t have to wait long for ours. This picture was taken by the photographer after he had snapped several traditional shots, moving people here or there to make sure everyone could be seen. “All right, let’s do a goofy one,” he said. 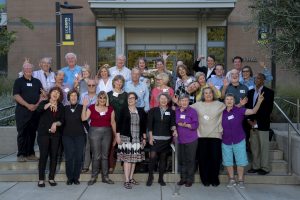 I have seen goofy shots of other groups that are hysterical. But when you ask a bunch of lawyers in their sixties to look goofy, this is the best you can expect — a few people making horns, some waves, and a couple of head tilts. We probably should have had more wine with lunch!

After the all-class dinner, those of us who didn’t have a plane to catch adjourned to a local bar to continue the conversation. Everyone agreed afterward that the before and after events that were only for our class were much better than the official events at the law school. So maybe we could even do it more often than every five years. Easy for me, I live fifteen miles away. We’ll see if the demand is there. And I will certainly be on the committee for our next reunion in 2022.

7 Responses to The Way We Were

Chair For Life
by Betsy Pfau