Prompted By The Great Beyond
2 comments. 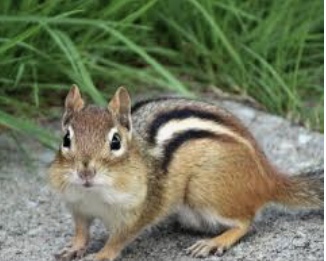 We live in Manhattan and we will love the hustle and bustle of our city life,  but we also love communing with nature on weekends at our woodsy retreat in the Connecticut foothills.  (See Country Living, Wisdom in the Weeds,  and  Pickled)

On one recent country weekend I came home from the market with a load of groceries and parked in the cul de sac in front of our garage,  a few yards from the house.  I got the shopping cart I keep in the garage and unloaded the grocery bags from the car.

When the cart is full I find it easier to push rather than pull it,  and so I pushed it down the path,   past my neighbor Jane’s house,  and down to ours.

A bit later I came out again to take my shopping cart back to the garage,   when I saw a chipmunk on the path ahead.   Surprisingly,  he didn’t scurry away as I approached,  and then I saw he was motionless except for a feeble swish of his tail.   Obviously he was injured and in fact one of his little legs seemed to be lying at an unnatural angle.

I felt heartsick seeing the helpless little creature lying there,  and suddenly I had a horrible thought.   Earlier,  as I concentrated on pushing that heavy load of groceries was I blind or oblivious to what was on the path ahead,   and had a wheel of my cart rolled right over him?   Had I irreparably wounded that innocent little thing?

Back in the house I couldn’t put that poor chipmunk out of my mind,  and so after dinner I went out with a flashlight to see if he was still there.   He was in the same spot,  and on the ground beside him was a paper plate –  and then I realized that Jane was standing on the path.

She’d also seen the chipmunk and had brought an offering of chopped nuts in the hope of nourishing it back to health,  as far-fetched a possibility as she knew that was.   Then we two teary-eyed animal-lovers hugged and commiserated,  and  I confessed to Jane that I may have been the culprit,  and told her about the shopping cart.

But Jane allayed my fears –  she and her husband had been out for the day and discovered the injured chipmunk when they got home about 4:30.   My car was not in the cul de sac then,  Jane said,  and in fact I knew I hadn’t gotten home until after 5:00.

Absolved at least of my guilt,  I was still heartsick.   Jane and I agreed to check on our chipmunk in the morning,  and when we did,  he was gone.

And although one might assume a predator carried him off to the Great Beyond,  Jane and I choose to believe our little friend ate the nuts,  regained his strength,  and is still out there living a happy chipmunk life.   And nothing you say will dissuade us!