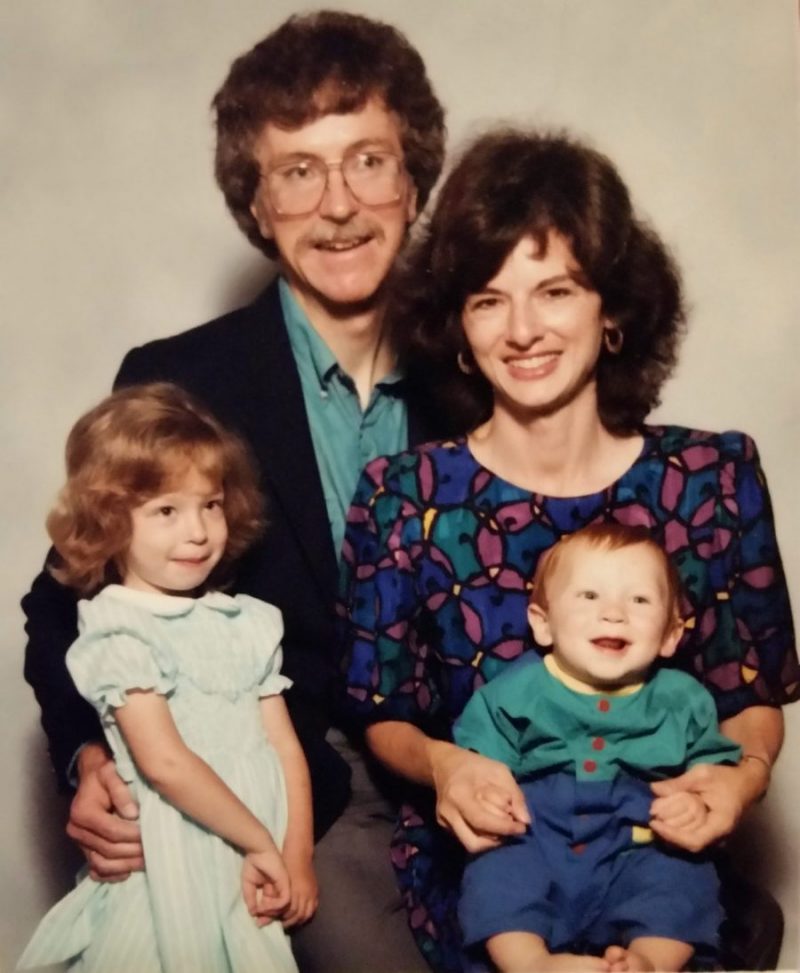 How do you tell your teenage children that their father has died? While perhaps not completely unexpected, I knew his death would be a shock to them, and wished I could shield them from the pain.

Readers of Retrospect will remember Barry from two earlier stories, So Much in Common, about our meeting, and Nice Day for a White Wedding, about our marrying. We were married for seven years, and had two wonderful children, whom you can read about in We Are Family.

How do you tell your teenage children that their father has died?

Around the time we split up, Barry was diagnosed with Parkinson’s Disease. At first it was a tentative diagnosis because he was so young, still in his 30s. But as time passed, it became clear that this was what it was. The progression of the disease was slow for several years, but then he began to freeze up more and more often. It became commonplace, when he had the kids, that I would get a phone call from the manager of a restaurant saying that my husband and kids were there, and my husband couldn’t move, and could I please come and get them.

He had to take a disability retirement from work. He hired a woman named Jan to be his assistant. At first she was just paying his bills and doing his grocery shopping, but later she became his caretaker, doing everything for him. Eventually he started suffering from dementia too, and would wander off. One time he walked almost to downtown, and when he was found he said he was on his way to an appointment with Governor Brown. He had worked for Jerry Brown in the late ’70s, but now it was 25 years later and Brown was long gone.

At some point, he was hospitalized, I can’t remember why, and it seemed like something snapped in the hospital. He stopped speaking and eating. He was discharged into hospice care. I told the kids that he was in the hospital and they wouldn’t be spending the weekend with him, but I didn’t tell them any more than that. When I went to visit him at the hospice, I could see he wasn’t going to last long. I talked to him for a long time, about our marriage, and our lives, and the great kids we had. I don’t know whether he heard any of it. I arranged for him to have a radio playing by his bed, so he could hear the rock ‘n’ roll music he had always loved so much, hoping that maybe that would bring him back.

I had been planning to bring the kids to see him, but decided not to, because I didn’t want their last memory of him to be looking like that. Sabrina’s graduation was the following Friday, and she had gotten tickets for Barry and Jan. I had to tell her that Barry wouldn’t be able to come, and I doubted Jan would either. She was disappointed about that, but her graduation was wonderful. Ben was in the high school band, so he was down in the pit playing Pomp and Circumstance. Molly and Ed and I were up in the balcony cheering her on. It was a glorious Friday night in June. It was also Molly’s 7th birthday, but she was okay with having her party on Sunday, and having Friday be Sabrina’s celebration.

When we came home, I did not check the answering machine. The next morning I heard the message that Jan had left the night before, saying that Barry had died. I had an hour or two before the kids woke up to process it myself. I decided to wait to tell them until after they had breakfast. Sabrina was in her room, sitting on her bed. I called to Ben to come in there too. I didn’t call Molly, but she came anyway. We all sat close together on the bed. I gently told them I had some bad news. “Dad died last night.” Then we all started crying together. Even Molly was crying, although she had barely known him. We all hugged, and spent some time talking about him, and then went on about our day. In a way I think it was a relief for them, because the last few years had been so hard.

On Sunday we had Molly’s birthday party, 15 first-graders at Funderland, a small amusement park near our house. Sabrina and Ben came too and went on the rides along with the little kids. It was good for all of us to get out of the house.

The funeral was the following Friday. We held it in the chapel at the cemetery where he was going to be buried. Since Barry was Lutheran and the kids and I were Jewish, we wanted to have clergy from both religions officiate. The cantor at my temple, who had become a dear friend after I joined the choir, happily agreed to co-officiate. However, no Lutheran minister would agree to share the pulpit with a Jew. It was important to Barry’s brother to have a minister, so the funeral home found us another Protestant clergyperson who would do it.

It was a beautiful service. I spoke, Barry’s brother spoke, and even Sabrina decided to speak. Many of Barry’s friends and colleagues were there, and shared their memories of him. They generally directed their comments to the kids: “Sabrina and Ben, you probably didn’t know this about your father . . . .” The memories everyone shared, as well as the songs and prayers, and the ancient ritual of Kaddish, were really good for them, and helped immensely with the healing process.

That was thirteen years ago, and we have rarely spoken about him since. In the first few years, I tried to get them to talk about him, but they seldom wanted to. Occasionally there would be specific memories — the Pink Floyd concert we went to when I was pregnant with Ben, the Roy Orbison videotape that Barry and the kids would watch over and over — but they didn’t want to talk about their feelings. A couple of years ago we were at a family camp in the Sierras run by Stanford, and when Sabrina found a room with all the old college yearbooks, she searched until she found the one from 1970, then took a photo of Barry’s senior picture and posted it to facebook on Father’s Day. This was the first time I had seen her excited to talk about her Dad. I think she liked to remember him when he was young and healthy, not older and sick. She does have some memories of him before he got sick. Ben has no memories of him healthy, so that’s probably why he doesn’t want to think about him at all.

Did I do a good job of helping my kids deal with their father’s death? I don’t know. Maybe some day they will be in therapy about it, but for now they seem to be doing fine.

5 Responses to No Way to Say Goodbye, part two