Degree in Self Confidence by Betsy Pfau
200
(319 Stories) 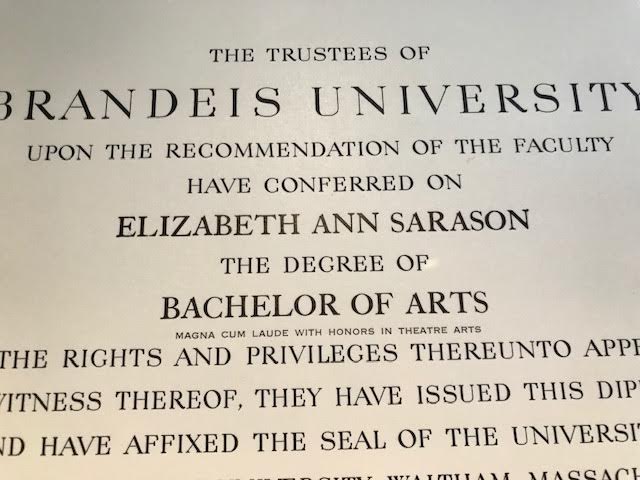 I was determined to be a Theatre Major. I picked Brandeis because it had an excellent theatre department and plunged right in, auditioning and landing a small role in the first Main Stage show my freshman year. I took acting classes, speech classes, movement.

I also stage managed many plays throughout my four years at Brandeis, which required a great deal of organization, collaboration, sharp thinking, great note taking, as I would write every cue the director gave in the script (called the prompt book) and call all the cues during the run of the show.

The most complicated show I ever called was second semester of my senior year. It was Lenny (which was later an Academy Award-nomiated movie directed by Bob Fosse, starring Dustin Hoffman as Lenny Bruce). It had over 200 called cues. The director didn’t get along with the costume designer and asked me to be the go-between. The female lead, Lenny’s wife, was a stripper. She walked around in heels and bikini for most of the show. The actress was not comfortable walking around in such an undressed state. At this point in my college career, I was fairly notorious for being comfortable in my own skin and modeling nude for art classes, so the director asked me to show her how to walk and look more at ease. In short, I did more than just call cues on that set. I am sure I was awarded departmental honors for my role in stage managing Lenny. I showed a lot of leadership in that production.

Though I had several good roles in plays, I also took all the requirements for my Massachusetts teaching certificate and student taught at Arlington High School first semester of my senior year, so I graduated from college prepared to be a high school English teacher. I knew I didn’t have what it took to go to New York and try to make it as an actor. Besides, I got married a month after graduation and Dan’s life was in Greater Boston.

We settled in the Boston area and I applied, unsuccessfully for teaching jobs. With my credentials, there were none to be had. Desegregation was in full swing in Boston; the Ku Klux Klan was marching (look up Louisa Day Hicks). I did not apply to the Boston school district. I applied to 12 suburban school districts and didn’t hear from any. I begged for, and landed a job at Dan’s company doing data input in the tech sector, as I described in https://www.myretrospect.com/stories/over-educated-under-qualified/. Though I was soon running the small data center, I knew that wasn’t my career objective. I listened attentively, as the man in the office next door, the salesman for the company, talked to clients all day. I knew I could do that.

I talked my way into a sales job selling training materials to the tech industry. They liked my education background. I jokingly said that I could laugh and cry on cue and would use that to my advantage if I didn’t get the sale. What I discovered was my background in front of a stage audience gave me a lot of confidence when I was doing sales presentations in front of executives. With confidence in my material, one is much like the other. I was good on my feet, could field questions, took copious notes, was always prepared, had great follow-through and was not afraid to ask hard questions and, most important of all, ask for the sale. Those skills came from all those years as stage manager.

I moved on to software sales. As my former colleagues will tell you, even to this day, I have never understood the inner workings of computers or software. But I know how to ask questions, have the right people by my side and get the job done. When I interviewed for my next job, the VP asked if I was competitive. I told him, “Not at something at which I have no chance to win, like tennis or golf. But I am competitive as hell at something I have a shot at. Think of me as the little terrier that bites your butt and won’t let go. I am tenacious”. He must have liked that answer, as I was hired. And, for some time, I was the top sales person at that company.

So this theatre major excelled at selling, using the communication skills, organization and follow-through that I learned on and behind the stage in my years at Spingold Theater at Brandeis University.

10 Responses to Degree in Self Confidence