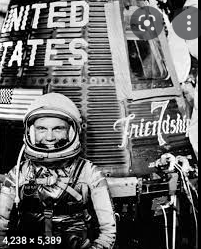 Being a somewhat sickly kid, I had been out with the flu the day my class took the Iowa Achievement Test in 4th grade, so on February 20, 1962, along with all the others from my Detroit elementary school who had missed that test, I sat in the small, upstairs art room all afternoon taking the make-up test. I don’t remember who the proctor was who monitored the test. Perhaps it was the art teacher, Miss VanAntwerp. She was a legendary, well-liked teacher at the school. She ended her class by saying in a booming voice, “STOP! Don’t move…don’t even breathe!” Then we knew it was time to end our art project and clean up our space. She would have been an excellent monitor.

But this afternoon was different. We all knew John Glenn was making a historic space flight and throughout the afternoon, our principal interrupted our endeavors by coming on the PA system with updates on the progress of his flight. We broke off whatever we worked on and sat in rapt attention to the short announcement. The proctor stopped her watch for that moment before we got back to our test. John Glenn was doing fine (we were not told of the broken heat shield) and on track to make history. We knew he had completed his mission before our 3pm dismissal bell! We were elated.

My parents watched the Huntley-Brinkley Report on NBC every night after dinner during my years at home. The program went off the air on July 31, 1970, just as I was about to go off to college. They then switched allegiance to CBS and Walter Cronkite. I’ve watched CBS ever since.

Even now, we watch the news on CBS, both national and local. We do not watch any cable TV, regardless of our political leanings (which anyone who has read my writing knows is very liberal). Dan can barely bring himself to consume any news these past years since November, 2016. I devour it, but mostly in print.

It was a fluke that I tuned into CNN on January 6, 2020 just to check on the Georgia special elections from the previous day. I watched the horrors of that day play out in real time. I was glued to my TV, even as I am to the hearings being broadcast now as we find out what led to that miserable day. I hope ALL the participants, including TFG, get justice.

There are several news events that stick in my mind forever, but the John Glenn space flight is the first that I can recall and I knew exactly where I was and what I was doing. I was 9 years old. I even had an opportunity to meet him many decades later when he received an honorary degree from Brandeis. At least I could shake his hand.