Prompted By One Song That Moves Me
22 comments. 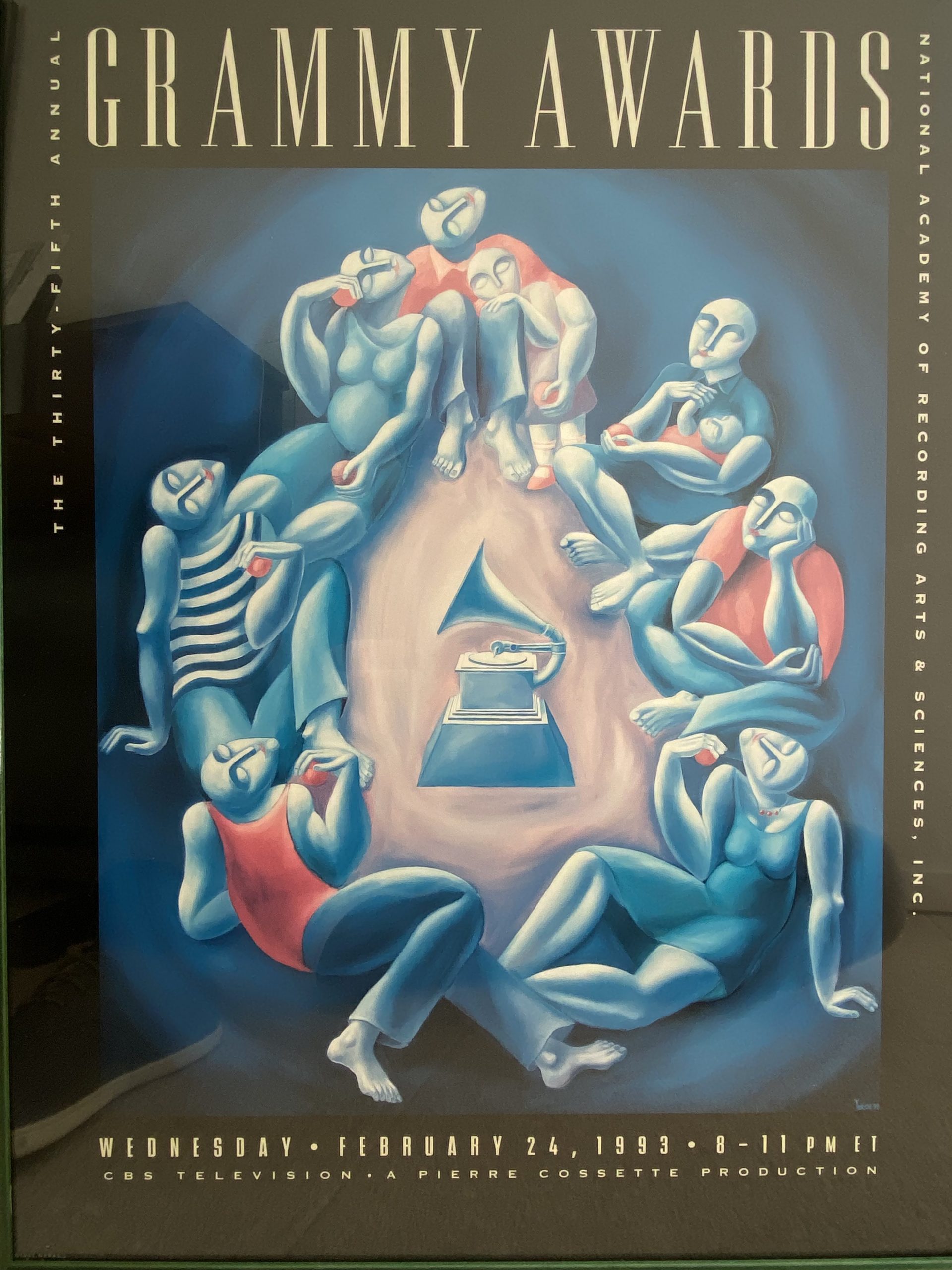 The Grammy Awards poster the year we won.

I have a long history with Carl Orff’s cantata Carmina Burana. Around 1966, my parents returned from my father’s annual tax seminar in New York City with an LP. They had heard it performed and thought I would enjoy it. I had recently become a fan of classical choral music and had joined my first chorus that summer at music camp. But I looked at it skeptically. A piece I’d never heard of by a composer I’d never heard of? Not likely.

Oh, there’s also a swan (a brave tenor) who sings of roasting in agony on a spit.

I put it on the turntable and was blown away.

At camp, I had sung Handel’s Messiah and Kodaly’s Te Deum. Carmina is nothing like those works, except that (like the Kodaly) it’s mostly in Latin. Orff based it on a trove of medieval manuscripts found in a Bavarian monastery in 1803. The poems and stories are not at all religious—in fact, they’re secular bordering on profane. Carmina is about the vagaries of fortune; the coming of spring; drinking and gambling; desire spurned and requited; and the urgency of young carnal love. Well, as a 16-year-old boy, I was certainly interested in that.

Oh, there’s also a swan (a brave tenor) who sings of roasting in agony on a spit.

I listened to it so often I wore out the stylus on my turntable. The song settings are vivid, almost cinematic. (Even if you don’t know the piece, you’d doubtless recognize its opening movement, O Fortuna, employed in so many movies, TV shows, and commercials that it has its own Wikipedia page.) I could practically sing along although I had never seen the score. I wanted desperately to perform it.

Flash forward to 1983. Now settled into our adult working lives, Patti and I thought it might be time to start singing again. We read in the paper that a local chorus, the Schola Cantorum, was sponsoring a series of Summer Sings where singers could read through some of the great choral repertoire. Last in the series: Carmina.

I went and learned three things. One, Carmina was as fun to sing as I imagined. Two, Schola was led by a dynamic, charismatic conductor, Louis Magor, with whom it would be fun to sing anything. Three, Schola was leading off its new season with Carmina. Fate was indeed smiling on us that day.

Singing Carmina with Schola launched Patti’s and my choral odyssey and initiated many lasting friendships. Seven years later, we sang it again—and recorded it—on the stage of Davies Symphony Hall as members of the San Francisco Symphony Chorus. That recording won a Grammy as the best choral recording of 1992. A fantasy come true.

In 2019, our friend Greg Wait—the swan in that original performance and our former voice teacher—concluded his 30-year reign as music director of Schola. We rejoined the group for his two valedictory programs: Carmina Burana and Brahms’ German Requiem (worth its own Retrospect tribute).

We thought we had exhausted the depth of Carmina in previous performances, but that turned out not to be true. Every performance is a little different. In this one, for example, the baritone soloist portrayed the abbot of Cockaigne as a staggering, hiccupping, rip-roaring drunk. And, after reviewing the men’s choral catalogue of the multitudes drinking immoderately in the tavern (the mistress, the master, the soldier, the priest…), we had to admit the characterization was apt.

More to the point, we’ve now lived long enough to appreciate how the gods of fate and fortune lift us up only to let us down, and why we must be forever grateful to generous Venus, Venus generosa. Parts of it choke me up every time, though we try to suppress that in performance.

So if the gods of fortune decreed that we had to choose one song—okay, one musical work—to listen to on repeat for the rest of our days, it’s hard to think of a better choice than Carmina Burana.

22 Responses to How Carmina Burana Changed Our Lives