Prompted By An Attitude of Gratitude
9 comments. 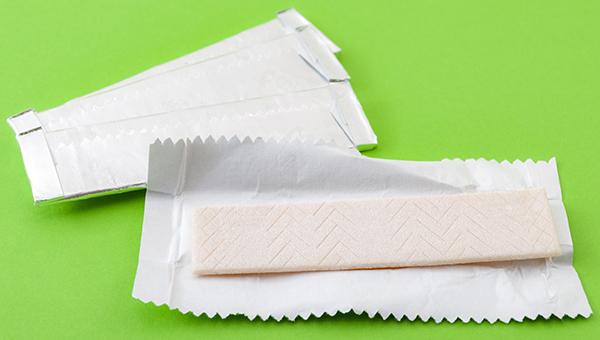 I was in second grade and had just turned seven years old when I received a pack of gum one night as my Chanukah gift.

Mom probably figured, “Dale has never in his life had his own package of gum. He only gets to chew a piece now and then when someone offers him a stick.

Siblings number four and five wouldn’t be born until I was 11 and 15, so at that time, it was just the three of us and my parents: Leon (nearly nine), Elaine (age three) and I. We were accustomed to each receiving gifts on all eight nights of the holiday, and the gifts were invariably much more substantial than chewing gum: a basketball, a board game, a book, a model boat, a pogo stick, a jacket.

Chanukah was really fun in our home, and not just because of the presents. Mostly because of the songs. Leon and I had learned some songs in Sunday School at the Reform synagogue we attended, and the five of us sat together around the lit menorah and sang them all joyously: “I’d like to be a Maccabee,” “On this night, let us light,” “My aunties and uncles must like girls and boys;”. “Dreidel, dreidel, spin around for me.” But we also had others, our own private songs that no one else knew.  Over the years, my lawyer-poet-songwriting father wrote so many—all original melodies and lyrics, but with a few key words such as latkes, dreidels, candles, and Maccabees showing up in nearly every song. Eventually, he wrote so many songs for Chanukah that we couldn’t sing them all every night, and to this day the far-flung members of the extended family (his grandkids and their spouses, and his great grandkids) struggle to remember a few of the ones from the later years that never made it into “heavy rotation.” But in those early days, I guess he had only written the first few, so after lighting the candles in the menorah each night, we probably sang them all. We always began right after the candle lighting with “It’s Chanukah Time,” with, following the opening chorus, its smack-in-your-face lines, “The Maccabees won, so now we have fun!”

My parents always brought a happy vibe to the Chanukah celebration, every night without exception. And the merriment continued with the opening of the presents, once we had finished the songs. I found out when I became a parent that it wasn’t that easy to bring forth that relaxed sense of merriment eight evenings in a row; it took planning and resourcefulness even to make sure to have gifts for every night.

I used to think of the gifts as coming from both parents, and that’s the way they presented them. But the task of finding and purchasing almost all of them, especially during those years when we were so young, must have fallen on Mom. As we got into more serious clothing and accessories in our adolescent years, I’m sure Dad was equally involved, drawing on a strong interest nurtured during his boyhood living upstairs from the clothing and shoe store that his parents operated in Newton Falls, Ohio. But for sure, in 1956, with Dad still trying to establish his own independent law practice after spending two very unhappy years with a firm, going downtown six days a week by bus so she could have the car, it had to be Mom who was left to hunt out most of those 24 gifts or more (at least one but sometimes more than one per child each night). 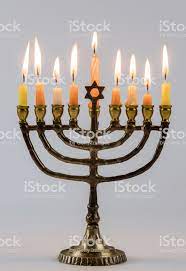 So it must have been Mom who decided the best she could do that one evening was some gum—though at the time, I wouldn’t have attributed it more to one parent than the other. She probably figured, “Dale has never in his life had his own package of gum. He only gets to chew a piece now and then when someone offers him a stick. It will be special for him to have his own pack of gum.”

I guess I showed disappointment upon taking off the gift wrapping and finding the gum.  I would not have been the kind of kid to say something mean. It would have been more what I didn’t say, and what I didn’t show. That is to say, I didn’t express any gratitude with my words or my body language. I probably asked, “Is this the only present tonight?”  And my parents said yes, and waited for more, but I had nothing more to offer. 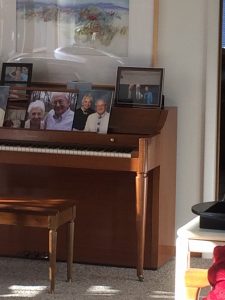 This is where my Dad used to sit and compose, in our living room.

What I recall more vividly is what happened later. An hour or so later, I was getting ready for bed in the room I shared with Leon when Daddy entered the room.

“Dale, don’t you know how hard your mother works to make sure you have a fun and happy Chanukah, and a lot of nice presents?” I nodded my head yes, although I was really thinking that both of my parents worked hard to give us all a happy and fun Chanukah. “How do you think it makes her feel when you act like you’re not satisfied with your gift tonight?”  He didn’t have to say another word. In a flash, I realized that Mommy was the one who must have chosen the package of gum, and she was the one who was feeling bad because I acted like I was entitled to something more. Right away, I had a lump in my throat and tears forming in my eyes.

“Do you think you could say something to Mommy before you go to bed?”  I nodded my head yes because by that point I couldn’t speak. I walked out to find her, sitting in the living room.  “Mommy, thank you for the gum.” She reached for a hug and we embraced. “It’s a good present.”  My voice was cracking too much to say more. “You’re a good boy,,” she said, and walked me back to the bedroom, offering another hug and a kiss good-night.

It was a good lesson in gratitude.  It was also a window into how much my father loved and appreciated my mother.

9 Responses to Just a pack of gum for Chanukah