Libraries and Me: A Lifetime Love Affair by Edward Guthmann
25
(28 Stories) 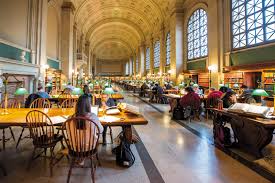 In the town where I grew up outside of Los Angeles, the public library would send a woman to ring your doorbell if you were delinquent in returning overdue books. She was perky and neighborly and had a kind smile. I remember my mom searching for a book, which she’d uncharacteristically forgotten, and apologizing as she handed it over to the friendly deputy.

My relationship with libraries is deep and affectionate, and I feel a strong sense of offended justice when I see library books that people have defaced or underlined or otherwise mistreated. What’s even worse is people who check out books and never return them.

I can’t imagine that happening today, what with libraries suffering budget cuts and people feeling afraid to open their doors to  strangers. But I’m glad I grew up in a time when that practice existed, because it reinforced for me the sense that libraries are special places built on democratizing principles; that reading is salvation and a gift; that library books are public property and not meant to be hoarded.

In my home town of West Covina there was a little library in a storefront across from the Presbyterian Church. I remember the slightly musty smells, the hushed and polite ambience, the peaceful, engaged faces of the patrons. I could sit down right now and draw you a floor map of all the bookcases, tables and chairs. I remember checking out Harriet Beecher Stowe’s Civil War classic Uncle Tom’s Cabin when I was 7 or 8, much to the librarian’s astonishment, and then not being able to read it because the language was so dated. 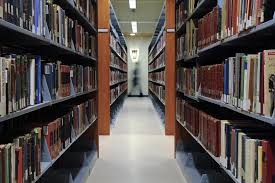 When I was 10 or 11, the city built a new, much-larger library near the city hall and police station. This was a big deal, civic-wise. There must have been five times as many books at the new facility. I discovered the periodicals section where newspapers were draped on slotted poles and arranged horizontally in racks. I would pull the Sunday New York Times and feast on the Arts & Leisure section with its news on Broadway shows and foreign films – a cherished window into a world of sophistication that from West Covina seemed awfully remote. They even had a large record section, where I discovered Bizet’s Carmen sung by Leontyne Price — my introduction to opera.

One day – I think I was 12 – I found a book on the making of The Misfits, the last movie for both Marilyn Monroe and Clark Gable. The clerk at the check-out counter was a clenched-tight scold and she refused to check the book out to me. I found my mother in another part of the library and without missing a beat she walked me back to the check-out counter and asked the clerk to explain herself. “Well, it’s The Misfits!” the woman said as if the title alone could lead a young reader to filth and degradation. “He’s not old enough for that.”

“My son reads at an adult level,” my mother said, “and you have no right to refuse to check out this or any other book to him.” She was indignant and fired-up that afternoon, qualities she rarely evinced, and I remember the surprised charge I felt as she brilliantly defended my civil rights and put the tight-assed prude in her place. My mother prevailed and I took that book home. But I found nothing even slightly raunchy in it — just gossip about Marilyn’s personal demons and on-set tardiness.

Going to the library was always an occasion, something my mom, younger brother and I seemed to enjoy equally. Since West Covina was spread out and lacked public transportation, I was dependent on my mother to drive me. I often checked out multiple books and ended up not reading most of them. I read my first “grown-up book,” To Kill a Mockingbird, in seventh grade, fell in love with Pearl S. Buck’s The Good Earth in tenth grade and was dazzled by early installments of Truman Capote’s In Cold Blood in The New Yorker — read aloud by my high-school journalism teacher Mrs. Schneidewind. 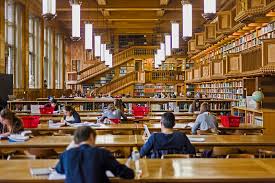 In college, I scored a job at the campus library and worked at the check-out counter. A dream job. I loved getting a behind-the-scenes view of library operations, loved the voyeuristic pleasure of seeing which books and magazines various people checked out. When I took a Shakespeare class I discovered the library’s large collection of plays on vinyl. You could rent a headset, schedule time at a turntable and hear Laurence Olivier and Maggie Smith performing Othello or Richard Burton anguishing his way through Hamlet. With money earned working at that library, I financed my first summer-long trip to Europe.

My relationship with libraries is deep and affectionate, and I feel a strong sense of offended justice when I see library books that people have defaced or mistreated. What’s even worse is people who check out books and never return them. In college I was in the home of a spacey hippie named Laurel and commented on the due date in the handsome art book she’d taken from the campus library. “Oh yeah,” she said with an airy, indifferent shrug. “I liked it so much I decided to keep it.” How I wish I’d surreptitiously rescued that book and returned it to the library.

Years later, I found a months-overdue San Francisco Public Library book in my friend Marshall’s apartment. It was A Little Original Sin, Millicent Dillon’s excellent biography of the fiction writer Jane Bowles. I was crazy for that book, and the fact that Marshall was selfishly hoarding it and denying other people the joy of reading it was criminal to me. Criminal and appalling. I told him that, probably more vociferously than I needed to, and then picked up the book and walked out.

Today, I use my neighborhood library constantly. I read three or four books each month, most of them library books. I check out music and movies on DVD, and frequently go to oaklandlibrary.org to put a hold on a book, renew a book, or just peruse the variety of titles available from certain authors (lately I’m obsessed with Steinbeck). I have my gripes: Libraries aren’t nearly as quiet as they were when I was a kid, and often become day care centers for the stroller brigade of exhausted nannies and rowdy toddlers. There’s also an absence of professional comportment among library workers: You see employees in T-shirts and jeans looking like they just came off the soccer field. Even the branch manager at my neighborhood library wears his shirttail out. Yep, I’m old-school: I respect libraries and I think the people who operate them should dress professionally. 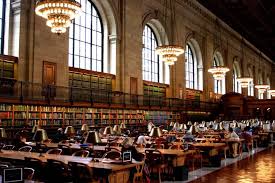 Last year I read Susan Orlean’s The Library Book, a wonderful study of the Los Angeles Public Library’s downtown facility: how in 1986 it suffered a massive, seven-hour fire that destroyed over a million books; how it recovered and today serves an amazingly wide demographic, including a large homeless population; how it adapts to changing times and continues to redefine the social, educational and spiritual functions of a public library.

Like me, Orlean formed her deep connection to libraries at a young age, starting with regular visits with her mother. I’ve always admired Orlean’s writing and The Library Book is one book I earnestly wish I had written myself. It’s graceful and passionate and it captures so beautifully the magic of libraries and the deep, abiding gratitude that library devotees like myself feel throughout our lives.

15 Responses to Libraries and Me: A Lifetime Love Affair