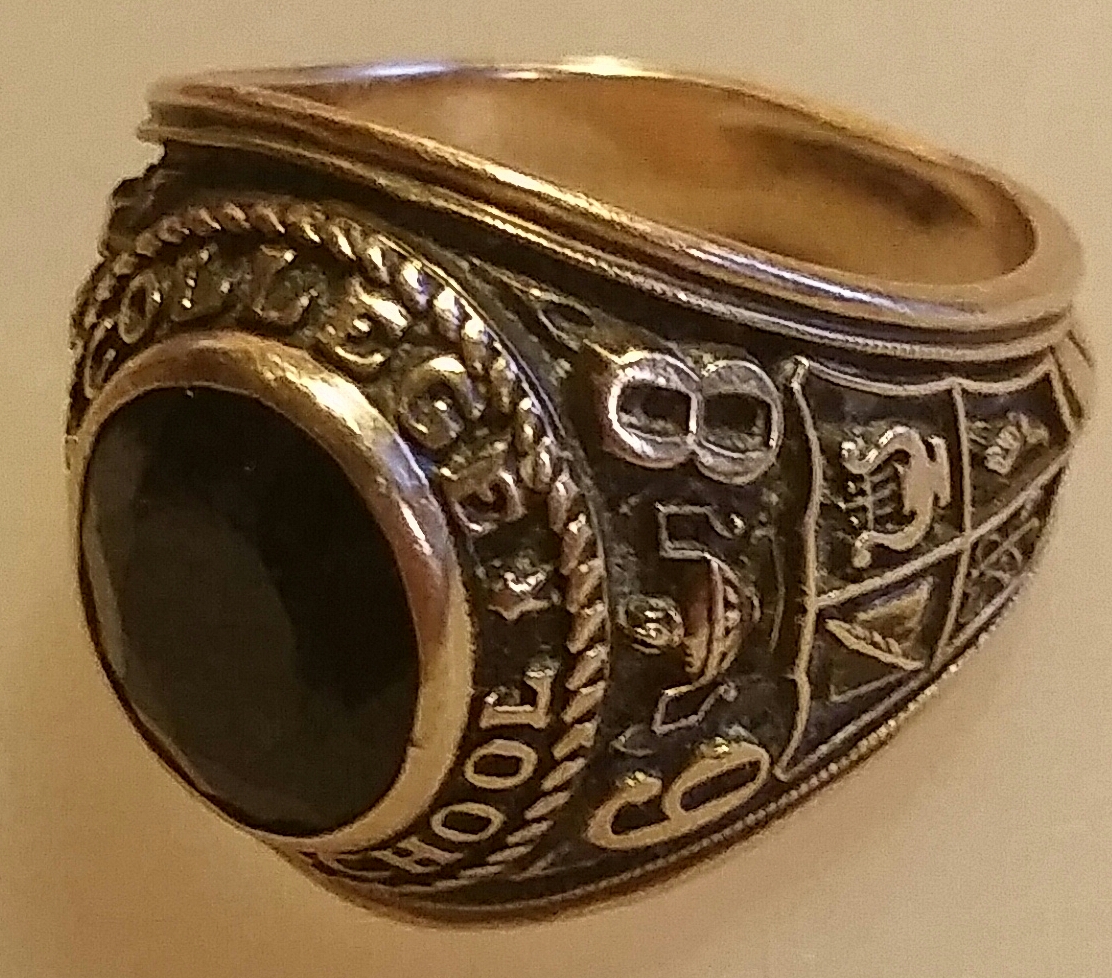 My high school ring, which I found and wore to my 50th reunion in June

1968. One of my favorite years ever, just seeing those four digits makes me happy. The prompt reminds me that many bad things happened that year too. But if I had to pick the one year of my life that had the greatest impact on me, it would definitely be 1968.

Actually, I have already written at least four stories for Retrospect that were about 1968. My high school graduation took me Up, Up and Away. My summer spent working on Eugene McCarthy’s presidential campaign was the Most Amazing Summer Job Ever. My experience at the Democratic National Convention in Chicago was a Universe ablaze with changes. And finally, starting college that fall I learned to Love That Dirty Water.

So, back to the beginning of the year. In January, college applications had been submitted, and it was just a matter of waiting for decisions. I had applied to five schools which were all in or near Boston, because I knew that was where I wanted to be. Socially, things were finally looking good. I had my first real boyfriend, whom I had met at a Chanukah party at my temple. Our first date was on New Year’s Eve. He was a sophomore in college, living in the dorms at Rutgers, but came home every weekend to see me.

In February, I had a stomach ache that turned out to be appendicitis. My oldest sister had had her appendix removed years earlier, and had an ugly vertical scar that was about six inches long. Did not look good in a bikini. So when my father (who was also my doctor) told me he thought I should have my appendix taken out, I said NO! There was no way i was going to have an operation that would result in a scar like hers! My father, to his credit, did not bluster and bellow at me in his usual manner. He negotiated. When he promised that he would make sure the scar would be small, it would be horizontal, and it would not show over the top of my bikini bottoms, I agreed to it. And he kept his promise, even though he was not the one to do the surgery (he never operated on family members). I ended up missing about three weeks of school, but it didn’t matter, because it was second semester senior year. The only sad thing was that they took the class photo for the yearbook while I was absent, so I am not in that picture.

On March 31st, LBJ announced he would not run for re-election, which was fabulous news to this budding antiwar activist. Four days later, on April 4th, Martin Luther King was assassinated. I’m sure I was shocked and upset, but I don’t seem to have any specific memories about it, the way I do about the assassinations of JFK and RFK, both of which I remember with crystal clarity.

About a week later college admissions letters arrived in the mail. The conventional wisdom was that acceptance letters were fat (all those forms they were sending), and rejections were thin. I had four fat envelopes, but my envelope from Radcliffe was thin, and I was afraid to open it. When I finally did, it was an acceptance. I was ecstatic! There were eight of us in my class who were going to Ivy League schools. (Radcliffe counted because it was part of Harvard. The others were Yale, Princeton, Columbia (2), Brown (2), and Dartmouth.) We formed the Ivy League Cutting Society (as in cutting classes, which we did, frequently). We were hot stuff, and the teachers and school administration couldn’t keep us down! I was elected by my classmates to give one of the speeches at graduation, and a boy who was going to Brown was elected to give the other one. Oh yes, somewhere along the line I went to my high school prom, which nobody remembers.

June 4, 1968 was my high school graduation. It was also the night Bobby Kennedy was shot, although accounts say that he was shot on June 5th, so it must have happened after midnight. I have already told that story in detail.

I spent the summer in Washington, D.C. working for the McCarthy campaign, and then went out to Chicago for the convention. If I were to make lists of the best and worst events of 1968, the Chicago convention would be on both lists. It was one of the worst because it was terrible for the nation, but it was one of the best because it was such an important and life-changing experience for me. I have heard it said that the Chicago convention and Woodstock were the defining events of our generation. Since I turned down an invitation to go to Woodstock, it’s a good thing I made it to the convention!

In September I started college, and that was everything I hoped for! Although there were some bad courses (lookin’ at you, Nat Sci 5),  roommate disasters (Linda #1), and boy troubles (not mentioning names), it was a fabulous, exciting time. I loved Cambridge dearly (still do!), and I met many wonderful people, some of whom are still my most treasured friends 50 years later.

In November, Richard Nixon was elected president. I didn’t care, because I hated Hubert Humphrey after what he did at the convention. If I had been old enough to vote in that election, I might have voted for Nixon, just to vote against Humphrey. Or I might not have voted at all. Although people were saying that Humphrey was the lesser of two evils, on the wall of my dorm room I had a silkscreened poster that said “There IS No Lesser Evil!” Ironic that in comparison to the evil we are currently faced with, 50 years later, Nixon seems positively benign.

There were so many incredible songs in 1968 that it was hard to pick a title for this story. I considered Piece Of My Heart, because I loved Janis so much, and tried to sing like her. But really, I concluded, that whole year was like a Magic Carpet Ride for me. 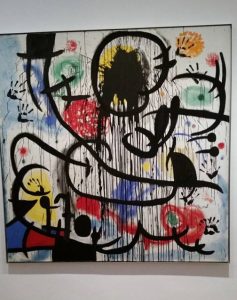 1968: From the Reactionary South to the Revolutionary West
by Lou Moffett
Grad Night
by richard c rutherford
So Much History
by ianzoeja