Nakey: The Concert by robingoldsby-de
10
(19 Stories) 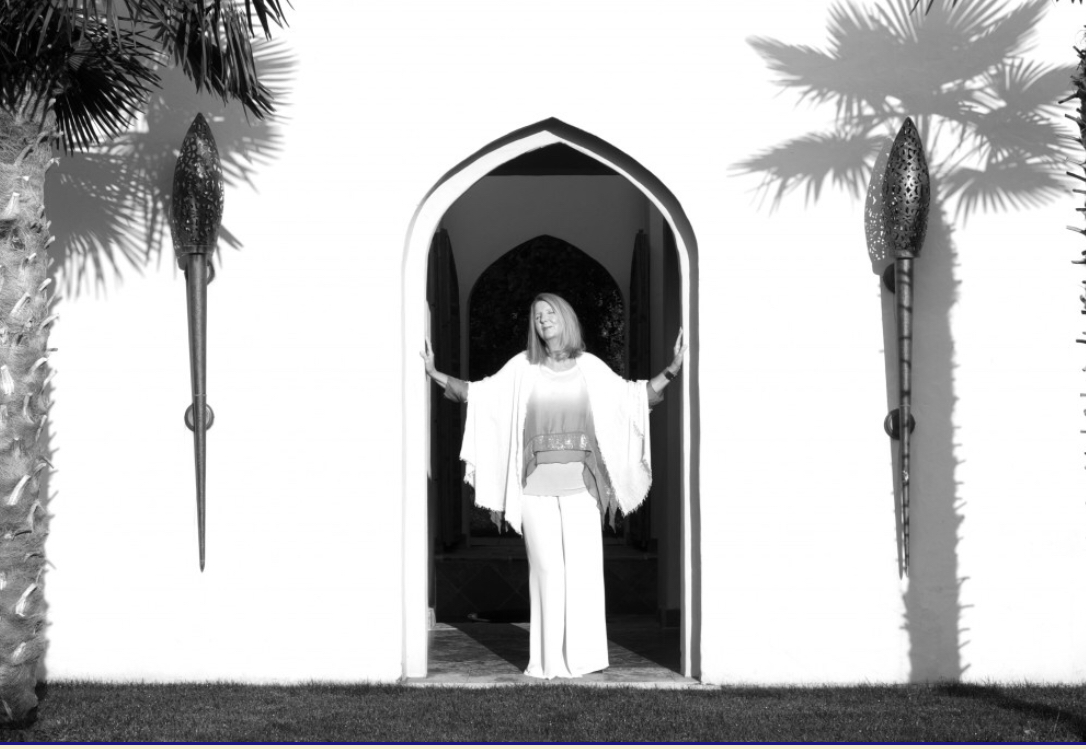 Any working musician will tell you: Our professional lives offer challenges both substantial and diminutive, situations blissful and farcical, moments hilarious and tragic. When we’re lucky, elements of our careers cross paths, circle back, and thump into each other, gifting us with a chance to simultaneously experience glory and goofiness during the course of one gig. My recent venture—as a concert pianist in a sauna and wellness center—proved to me once again that art and absurdity can peacefully coexist and thrive in the oddest of settings. Just because your audience is nakey and asleep, doesn’t mean they’re not listening.

The novelty of the German sauna has accompanied me through much of my literary career. The first essay I sold—to the Pittsburgh Post Gazette in 1995—chronicled my first hesitant forays into the world of public nakedness. Through a series of wonderfully misguided steps over the course of two decades, my solo piano recordings became part of a popular sauna ceremony at Mediterana, an award-winning wellness center, located twenty minutes from my home in the German countryside. Wellness plus soothing solo piano—the concept made perfect sense to me. It still does.

"Keep your eyes closed, Mrs. Goldsby, and imagine your listeners dressed in gabardine and silk. Or at the very least, underpants."

Full disclosure: I have an annual membership to Mediterana. It’s one of my favorite haunts when I need a tonic to soothe frazzled nerves, repair aching muscles, or chase away the winter blues. It’s Disneyland for stressed adults.

The ceremony in the Kerzensauna (candlelight sauna), called Piano del Sol, features two of my recorded compositions, a flag-waving sauna guy in a plaid loin cloth, a pendulum full of ice that drips water onto lava rocks, and, at any given time, thirty naked, sweating people who have to remain silent and aren’t allowed to leave until the music finishes. My father, Bob, insists this is karmic payback for the decades I spent playing in noisy cocktail lounges and hotel lobbies. Imagine. People sit there and listen, and no one is serving them drinks. The ceremony is wonderful and silly. I love it.

As the nakey gods of fate and good fortune would have it, Mediterana asked me to compose and record sixteen new pieces—four for each season—for use in the Kerzensauna. They licensed the music from our record company and purchased the exclusive rights to sell the physical CD to their visitors over the next five years. I keep hearing rumors that music fans have stopped buying CDs. Perhaps this doesn’t apply to those who are naked, asleep, or both.

Mediterana released Piano del Sol on October 13th, 2015. Keeping with the industry tradition of presenting a launch concert, they booked me for a performance on the drop date. Don’t we just love those music-biz terms? Drop, release, launch. Maybe not such fitting words when your audience is buck nakey, and you’re the only one wearing a bra.

It’s three o’clock. In one hour I’ll be performing in the Indische Hof, Mediterana’s East Indian indoor garden. The English translation of Indische Hof is Indian Square, which makes the event sound like a concert in a teepee. I hope no one asks me to do a white girl rain dance. Circle your wagons while you can.

The Indische Hof, a Mecca of mosaic tile in soothing shades of green and blue, hosts a large granite fountain with floating rose petals, an indoor garden with palm trees and ferns, and a skylight that filters the dusky German light into something both gauzy and gilded. The garden pulses with mingled fragrances of eucalyptus and lavender, myrrh, and sandalwood. It is a refuge for meditation and reflection; a place to lie half naked next to a complete stranger and hallucinate. Today, in the middle of the vista of over-sized lounge beds, sits a large Yamaha grand piano, looking like a stout hostess at an “east meets west” cocktail party. A sitar would be more appropriate in this space, but it’s Piano del Sol, not Sitar del Sol, so we’ll work with what we have.

What we have is me, dressed in my Ultimate Pajamas—a black silky outfit with a vaguely East Indian looking cape tossed over my shoulders. With the exception of my blingy flip flops (you can’t wear real shoes here), I’m dressed for a concert in a more traditional location, or a gig in a fancy hotel lobby. This is not true of my audience. Terry cloth—or fairy cloth as my daughter once called it—covers most of the guests. Towels, wraps, bathrobes, more towels. At the perimeter of the performance space, naked people stroll from one sauna area to another, but they don’t spook me. My nearsightedness blurs them into an impressionistic tableau of brown and beige skin. Mostly beige.

I need to warm up—it’s toasty in here, but I want to get the touch of the keys under my fingers. Every piano feels different, and this one, delivered in a rush this morning, schlepped from the cool autumn air into a manmade tropical retreat, might have unique issues. It’s pin drop quiet, people are sleeping, and other audience members are silently taking their places in beds and on velvet sofas. Not a good time for a soundcheck. I figure I’ll take my chances and wait until show time before playing anything at all. I open the piano to full stick, then sit and check the position and height of the bench.

Uh-oh. Not good. Right in my sight line—at the end of the piano—is a corpulent man in a robe. He’s asleep. Not a problem; sleeping seems to be the activity of choice in this space. But he’s got a case of man spread, the robe gaps open, and there, right at eye-level, are things no self-respecting Piano Girl should have to see, at least not while performing, and certainly not while attempting to focus on a new composition that features chord clusters that are a bit advanced for tentative fingers. Concentration is key for this performance. Am I really going to play something called “April Tango” while looking at Benny and the Jets at the end of the Yamaha? I think not.

Or I think so. For better or worse, I’m determined to make this concert work. I escape to the holding area and try to get hold of myself. Forty minutes until I go on. The holding area doubles as a First Aid station. I hope there are no medical emergencies between now and show time. I check out the defibrillators on the wall and wonder how often they’re needed. Imagine, naked, covered in sauna sweat, and having a heart crisis. Every middle-aged woman’s worst nightmare. Not even a chance to put on nice potty pants before being whisked off to the ER. In this place it’s fairy cloth or nothing.

I sip a cup of chamomile tea, thoughtfully provided by the young woman in charge of today’s shindig. The beautiful J wears a cotton sarong. She’s rosy-cheeked and cheerful, excited about the concert, worried about her introduction, concerned that there won’t be enough beds and sofas for the guests. There are 1200 visitors today at Mediterana—about 100 of them will recline and hear my performance. That’s a lot of beds.

I think about the guy in the front bed, then I try not to think about him. Family jewels. Right. Obviously a term invented by a man.

Voice of Reason, a reliable friend from my Piano Girl past, resonates in my head: Keep your eyes closed, Mrs. Goldsby, and imagine your listeners dressed in gabardine and silk. Or at the very least, underpants.

A loudspeaker voice blares through the building: “Please head to the Indische Hof in five minutes for the Piano del Sol concert!” The voice sounds like one of those “stand by for evacuation” announcements I used to hear during a fire alarm or bomb threat at the Marriott Marquis in Times Square. Scary. I remind myself that I’m twenty-one years and 3,755 miles away from Times Square. Sure, we had the occasional naked person roaming Forty-second Street—perhaps a PETA activist or a flasher—but for the most part my daiquiri-swilling Manhattan fans were clothed. They weren’t always wide-awake, but at least their private parts weren’t flapping in a Broadway breeze.

I sit on the paper-covered exam table in the First Aid holding room. I go through my set list—I am scheduled to play all sixteen compositions with musical transitions between the pieces. There won’t be any applause until the end—an intense sixty minutes of new music for me, but a swell opportunity for music lovers to chill out and take a nap.

It’s time. I take another gulp of tea and leave the First Aid area. J introduces me. I take a bow and sit down at the piano. It’s very quiet—management has turned off the fountains and my naked audience, swaddled like newborns in towels and blankets, has settled in for an hour of meditative music.

Voice of Reason: Concentrate. It’s just another concert. It’s just music, with sleeping people allowing you to accompany their dreams.

Voice of Doom: You’ve been putting people to sleep with your music for years. Nothing new here.

Voice of Bob (my father): Now would be a great time for the “Hokey Pokey.”

I swat the voices away—shew!—close my eyes, and focus on the task ahead. Four seasons of music, starting with spring. I play the vamp to Piano del Sol, the title track of my album and let the sound wash over me. Slowly, like a lonely traveler finding her way home, I wander through the faded light of my past. Through my fingers, I feel the relief of a shade tree on a hot summer day, the golden glow of a cloudless sky in mid-October, the miracle of a clear day in February. Fairy cloth and sun dance. For several moments, I even feel young.

I play on and on, caught in my own weird spell. I don’t know if I sound good or bad but it doesn’t matter. I sound like me. Take it or take it not. My sleeping audience frees me—maybe their nakedness frees me as well. We connect with each other—not through eye contact or visual cues, but through sound and trust. Together, we’ve created something magical. Almost. It’s as close as I get in the music business.

I’m dazed and exhausted when it’s over. I sign CDs and do the “meet the artist” thing. I chat with some of our guests, wondering if I haven’t already said enough with my music. Maybe not. But that’s the great thing about art. There’s always more to say. 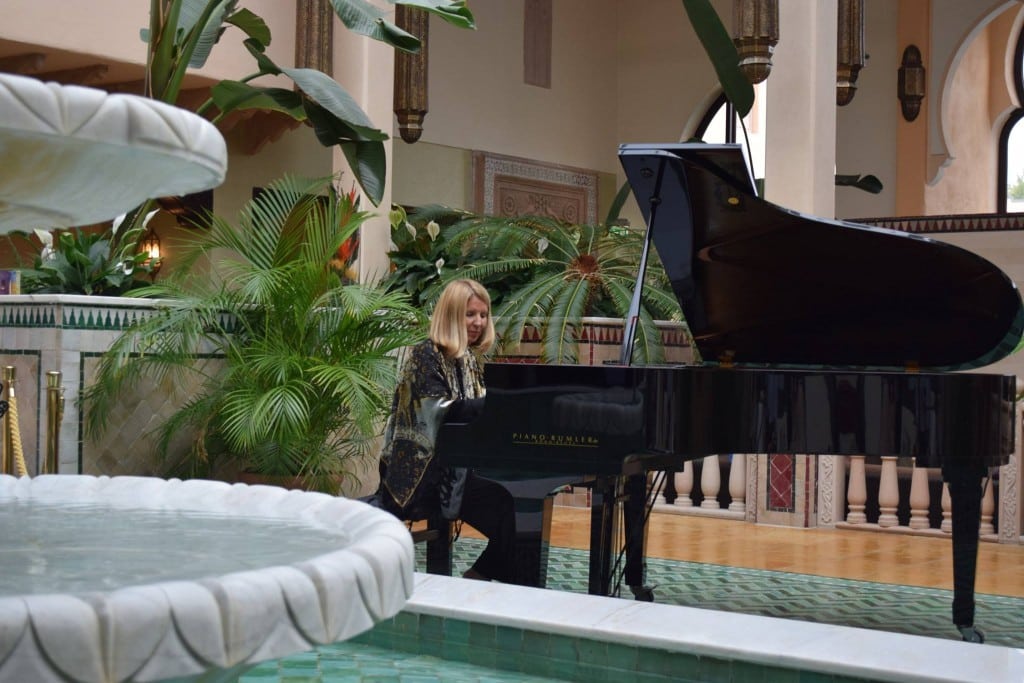 Photos by Julia Goldsby. RMG is a Steinway Artist.

7 Responses to Nakey: The Concert