The Baths at Esalen by John Zussman
50
(86 Stories) 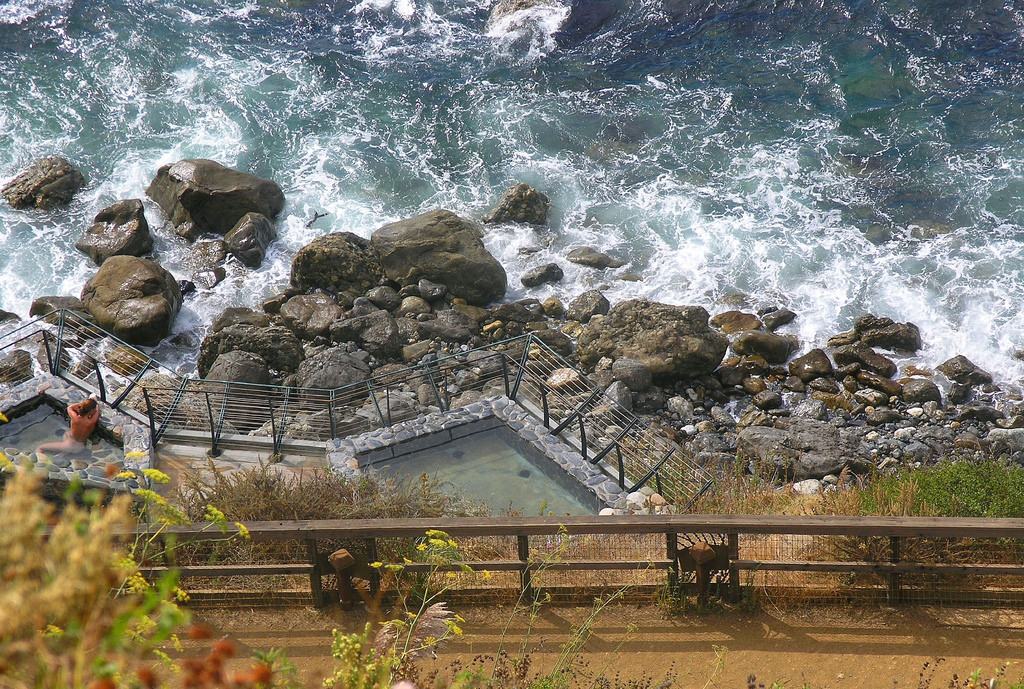 View of the baths from above. Photo credit: Nate Bolt, Flickr.

Despite their name, the baths at the Esalen Institute, cut into the cliffs at Big Sur, have little to do with getting clean. In fact, you shower beforehand. The baths are about something else.

No one is self-conscious about the nudity, and from our attitude and bearing you would think we were all decked out in our Sunday best, headed for church.

The building is cut into a cliff, open to the ocean so you can hear the waves crash on the rocks below. There are large concrete tubs in the sun and the shade, as well as claw-footed porcelain tubs for one or two. Fed by hot springs, the water feels soft, like liquid silk. It’s all in the open, and no one wears a stitch, so it’s easy to feel like you’ve died and gone to heaven. There is such an abundance of flesh that by the end of the weekend I am tempted to cry “Enough! No more! Save it for next week, when I’ll be back at my community pool where everyone’s in board shorts and tank suits.” 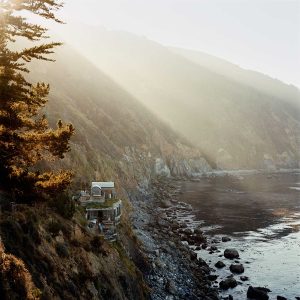 There is a talking side and a silent side. The talking side is a good place to get to know your fellow workshop members who, for me, are other writers. No one is self-conscious about the nudity, and from our attitude and bearing you would think we were all decked out in our Sunday best, headed for church. But it’s strange to be deep in conversation with someone you know … well, barely. We are subtle. We have learned not to stare, certainly not to leer. I can talk politics with a woman in the tub and not look down once. But under the water I feel her nakedness; I can sense it when she shifts position or stretches her legs or leans over the ledge to watch the surf.

On the sundeck, I wait for my massage therapist. The young woman on the next table is just beginning hers. The woman slips off her towel; she’s wearing nothing but a woven chain around her waist, which the masseuse asks her to remove. When she does, the gesture is so intimate and revealing I have to gasp. It reminds me of the old joke about two guys at a nudist colony who pass a particularly buxom woman, and one turns to the other and says “Man, wouldn’t you like to see her in a tight sweater!” 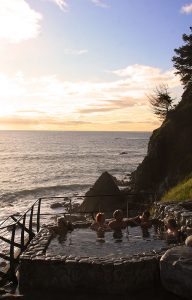 It’s not that all these bodies are so perfect; there are all kinds of bodies here. But there is something attractive about any body whose owner is comfortable with it, confident in it, and enjoys how it feels languishing in the hot water or soaking up the sun. The bodies here exude that confidence.

In my fifties—unlike in my twenties—I generally have little problem with, um, unwanted excitement in these settings. For one thing I have more experience mastering my arousal, and for another, the hormones just aren’t flowing as strongly as they used to. Unfortunately I lose such mastery when my wife comes down to the baths with me. (The same thing happens at nude beaches when, after lying next to each other naked in the sun, she’ll get up and say “I’m hot, let’s go in the water,” and I’ll say “You’ll have to wait a minute, honey, I’m hot too, in fact I’m a little too hot,” and she’ll wait while I think of baseball or calculus or the stock market.) At the baths, she curls up next to me and puts her arm around my neck, or stretches her body in the sun, and I am called to attention and have to cover up or turn aside. Left alone momentarily in the shower, she soaps me up, and I think I am never going to get soft, I am going to have to spend the rest of the weekend with a towel or a notebook or a lunch tray positioned carefully in front of my crotch. And I pray that no one comes in, and of course I also hope that someone does. But I also store the scene for later reference, and I think my wife does too.

When you start the day in the baths—if you can drag yourself out—you find that the writing in the workshops comes easier. The process of self-revelation has already begun.

9 Responses to The Baths at Esalen