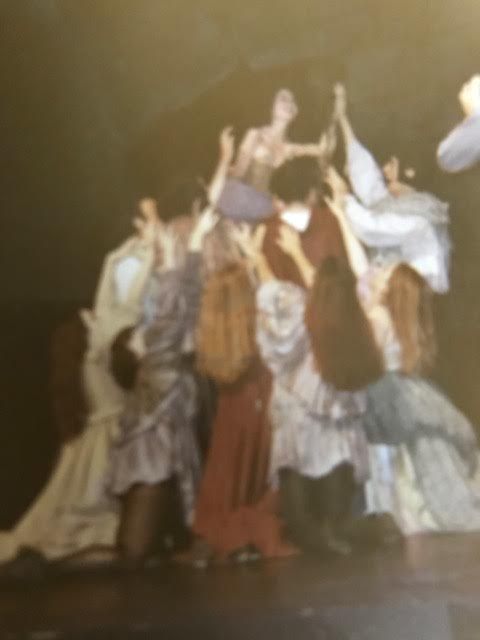 Charlie leered at me, “Hey doll, did you pop out tonight?” Charlie was Charles Werner Moore, a much-respected director, actor, and acting teaching at Brandeis (though I wouldn’t take a course with him until the following year) and director of the first Main Stage show my freshman year at Brandeis. He never learned young womens’ names, calling each of us “Doll”. It was a different era in so many ways.

The show was “The Devils”, based on a novel by Aldous Huxley. It was also made into a movie, released in 1971, directed by Ken Russell, starring Vanessa Redgrave and Oliver Reed. It tells the story of a licentious French priest and disturbed nun during the reign of Louis XIII; perfect for the turbulent, troubled times of political and sexual revolution we found across many college campuses in 1970. At the time, Brandeis had a first-rate theater department, with a large graduate department and many artists-in-residence; professional actors, paid to perform with us and sometimes, teach us. The opulent costumes were rented from the San Francisco Opera Company.

I played a townsperson and was only in crowd scenes.  Toward the end of the play, Father Grandier, the licentious priest, is burned at the stake as a heretic. The penultimate scene was a wild orgy under a pulsing red strobe light. For this scene, I changed from my long peasant-girl dress, to a decadent outfit; wool shorts and a tight leather corset…ready for the final scene, depicted in the Featured photo, which I will describe in a moment. In the orgy scene, groups were all over the stage, running around, creating mayhem. I was paired with two large, male grad students. There were no real stage directions…just “go wild; improvise”, and they did. I was a petite, 90 pound freshman and they took advantage of their advanced years, size and knowledge; ganged up on me and came just short of gang-raping me on stage every night. We groveled on the ground, they got on top of me, pushed down my corset, groped me and I was powerless to stop them. I did, indeed “pop out”. Once out, the corset was too tight to stuff myself back in. Charlie loved the action. Since we were at the back of the stage and under a pulsing strobe light, audience members were never quite sure what they witnessed. This was, after all, the era of “Hair” on Broadway, so sort of “anything goes”.

In the play, it isn’t clear to the peasants if Father Grandier is a demon or a martyr. In either case, his remains would have special powers and the final scene found me (as the smallest cast member) held on the largest cast member’s shoulders, holding the charred head of Father Grandier aloft, while everyone flails about wildly trying to grasp at it. That is the photo above, taken by the theater business manager at the final dress rehearsal. I heard Gil Schwartz ’73 (now the VP of Communications for CBS) yelling at me from off-stage right to move my arm…he couldn’t see my boobs! That was my introduction to being exposed in public. It was not intentional. On the other hand, I did not spontaneously combust. This was the beginning of public nudity in “artful” settings for me.

Later that year, I sat at dinner with a senior studio art major. We were not alone at the table when he commented that he needed someone to model for him, as he wanted to paint from life. I had gone to art museums my whole life and was well-acquainted with the nude form in paintings, gave it a moment’s thought and volunteered for the assignment. And so began my long career as a life drawing model. About a week later, I was in a private studio in the art building, disrobed and we found a pose that I could hold for a long time and he found interesting to paint. I was seated on the floor, legs extended beside me, torso upright, twisting backward, with a spiral in my spine, looking back. My face was not visible. We spent many hours together until he deemed the painting finished. He started on a second painting, but asked me out on a date, which I thought crossed a boundary. Not related to posing, I became ill, spent a week in the infirmary and the entire project was over, though that one finished painting of me hung in a show of senior art projects.

Sophomore year, a fun group of us appeared in the Orientation Show. A grad student directed it. We had such a good time together, the director decided to continue on with a theater workshop, exploring ideas from other cultures of origin myths and death. He auditioned a large group and winnowed us down to about 10, with a large overlap of those who had worked with him on the Orientation Show. We rehearsed on Saturday mornings and delved into all sorts of touchy-feely stuff, appropriate for the era. Slowly, a show took shape. The first part would be about the creation of the universe, the second act about the destruction of Mankind…heavy topics! These grew out of the work we were doing in our workshop. Our director decided there would be a Mother Earth and Father Sky coming out of roiling masses (everyone on the ground under tarps). By this point, I already had a reputation for being something of a free spirit, so he invited me to be Mother Earth, emerging from under the tarp stark naked wearing nothing but a mask, just as my male counterpart did. In the second act, which was more scripted, the women wore dashikis which we made ourselves. We thought we were so cool! 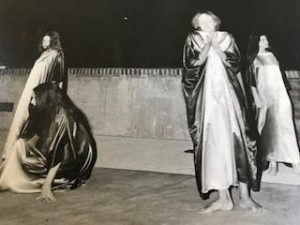 Mourning the loss of Mankind in our homemade dashikis

We performed the show, actually titled, “‘Til, Like a Dream”, but forever called by everyone, “The Outdoor Theater Thing”, outside, on the patio of the Student Union. We performed it twice in early May, 1972. It was COLD out! Students sat on the ground and on the walls. I later learned that some watched from adjacent dorm rooms through binoculars. The only comment that anyone dared make was that I wasn’t large enough to portray Mother Earth!

The next year, wandering around campus, I ran into the campus photographer, one of the all-time great guys. He told me he had taken several photos that evening and made up the photos for me. So yes, a nude shot of me exists, and no, I’m not posting it here!

The theater hired a fantastic scenic painter, one of the best painters I’ve ever met. He decided he would teach life drawing to the design students in the theater and needed nude models for this class. I was still an undergrad and knew everyone in the class, which was a little awkward, but the money was good, so I began modeling for him, about once a month, as described in Posing in 3-D. I continued even after I graduated, though I was now married and worked a few miles away, still in Waltham. The folks in DoD software development found this (and me) quite fascinating. I modeled beyond Brandeis, as friends knew that I was good at it and referred me to other schools. Teachers paid cash. It was my pin money, no questions asked. I remained in touch with the teacher until he retired in 2014. I was the only non-design student to attend his retirement party. At any Brandeis event, he always introduced me as “the best nude model he ever knew”. Actually, high praise.

In the spring of 2002, I got a call from a stranger. He identified himself as a casting director for a movie called “The Strangler’s Wife”. I had never heard of him or the movie. He went on to tell me the name of the director; a good friend from college. They were looking for someone to play the role of a life drawing model in the movie. This was not a paid role, it would be just for fun; one day of shooting on the set. I laughed out loud. “Does Michael remember that I’m 49 years old?” The casting director said, “Michael predicted you’d say that.” “Well, I’m still in good shape, why not?” “Michael also predicted you say that.” “Yes, Michael knows me well.” And that is how I came to spend a May day on the set, again posing nude for a life drawing class in two scenes from his movie (though Michael learned that he couldn’t show pubic hair and get an “R” rating, so I had to allow for that). Movie sets are fundamentally boring, as there is a lot of waiting and down time, then a flurry of activity when the scene is shot, then waiting again. This was a very low budget thriller. Not a good movie. It had one showing at the Coolidge Corner Theater in Brookline, then went to Netflix. (I had friends who sat with a bottle of bourbon and watched it; probably the best viewing option.) The director’s wife found a copy for me on eBay a few years ago. I even have an IMDb credit. 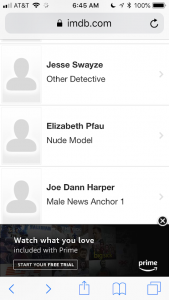 I asked the producer to use my maiden name in case my kids ever got ahold of the movie, but somehow that request got lost in translation. Oh well. Perhaps someday they could be proud that their mother took care of herself, even as she aged. At least one hopes that would be the reaction. We should not be ashamed of our bodies.

11 Responses to No Shrinking Violet