Prompted By Highways and Byways
11 comments. 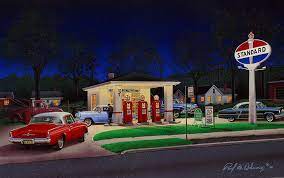 A car trip from my childhood home in Indianapolis to my grandparents’ home in Toledo, Ohio, would take three hours and fifteen minutes today, according to my GPS. That’s 10 minutes from our old house to I-69 North and then a turn east onto U.S. 24, before reaching Fort Wayne,  all the way to Toledo.

To play the “Gas Station Game,” you began by taking turns choosing different brands of gas, the way you might pick players on a pickup baseball or touch-football team. He would pick first—that was just the rule—and he would always pick Standard,

But the construction of I-69 didn’t start until 1967, the year I left for college. So that’s not the route we ever traveled to see Grandpa and Grandma, not at all. The trip we took in our pale green 1956 Ford station wagon and later in our “Baron Blue” `1962 Nash Rambler required nearly double that amount of time, counting one or two stops for food and gas, travelling on state highways that took us through towns and cities. Instead of avoiding Fort Wayne, we looked forward to stopping there, as it segmented the journey into two roughly equal parts. In fact, once Dad and the rest of us discovered it, we had a very specific lunchtime destination in Fort Wayne that we highly anticipated: Hall’s Stockyard Café. 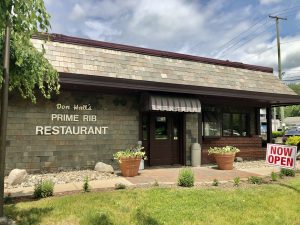 The name is now “Don Hall’s Prime Rib” but it appears to the the same place that used to be called Hall’s Stockyard Cafe.

Hall’s had food we all enjoyed, but also, it gave my Dad a chance to practice one of his pastimes: pretending his kids (especially me) had questions about the menu or the service, so that he could ask these questions without compromising his own sense of savoir-faire. “What can I get for you?” a. waitress or waiter would ask, eyeballing our family of six, seated in one of those rounded booths. “Before we order,” Dad would begin, “My son Dale would like to know, what do you put in your deviled eggs?”  Another time: “My son Dale was wondering if someone could order a bowl of chili con carne without the beans,” or “My son Dale was wondering if, instead of the prepared salad dressings, you could just bring out some olive oil and vinegar.” Sure, Dad. When was the last time I ordered a salad?  (Never.) I would wait till the waitress was gone before displaying mild pique. A smile was the only response I remember ever getting from Dad.

Driving along roads that took us through cities and towns allowed us to spend some hours playing a game that would never be feasible on the Interstate, one that my brother Leon invented. To play the “Gas Station Game,” you began by taking turns choosing different brands of gas, the way you might pick players on a pickup baseball or touch-football team. He would pick first—that was just the rule—and he would always pick Standard, Then it was my turn, and I might pick Cities Service or Shell.  Then he would select Sunoco or perhaps Gulf. I might go for Sinclair. I was always happy if he left Texaco on the table, because I liked the big red star and I liked the sound of the name.  Once we each had picked a designated number of brands—usually four or five each–the competition and the scoring began. As Mom or Dad drove along, you looked out the window, watching for a gas station. If he saw and pointed out one of “his” gas stations, he got a point. If I saw one of “mine,” I got a point. The final score wasn’t tallied until you reached your destination.

Standard had far more gas stations than any other brand in the Indiana landscape in the 1950s—damned those Rockefellers!  For that reason, I don’t remember ever winning the game. Not only did Leon have the more prevalent stations, but he was more attentive to the topography.  After driving past farms and prairie land for many miles. I would be talking to my sister Elaine, or looking down, reading a book in the back seat, and forgetting there was a stiff competition going on. Suddenly, he would call out, “Sunoco! I have 9 points now.” I would look up and realize we had entered a town a couple minutes earlier, and already passed some commercial blocks full of stores and a few gas stations. But too late for me, we were just about to leave that town. As usual, I had probably left some points on the table. 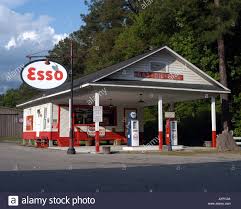 I was surprised one time when Leon didn’t pick Standard first—so I did and thought I could finally rack up a win. Leon had picked something called “Esso” that was not very familiar to me  It didn’t take long for me to figure out something he already knew:  the vast majority of the Standard stations, almost overnight, had rebranded themselves with the name ESSO. (The “es” and “oh” were the initials of Standard Oil, as I would later learn.) As ever, he dominated the game.

One other feature of those road trips on state byways was the occasional encounter with a series of 7 or 8 red-and-white “Burma Shave” signs sticking up—but not very high—along some farmer’s field. Dad took particular delight in these, as he had first seen them in the 1930s, growing up in Ohio. You had to be quick if you saw one coming, in order to read each sign and grasp the whole series. Each one would come about 100 feet after the one before. If you didn’t see them all, you might miss the rhyme scheme, and the point.

Here are a few that I have found on the Web. I do not recollect if I ever saw these same ones on the road to visit Grandma and Grandpa: 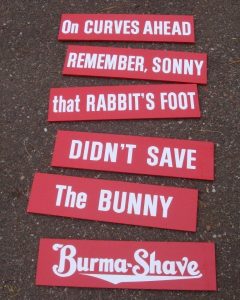 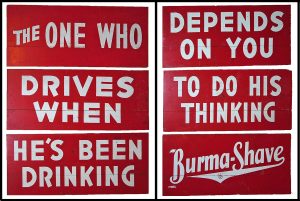 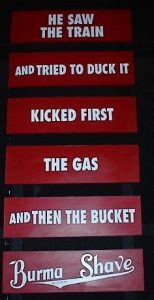 11 Responses to On the way to Toledo