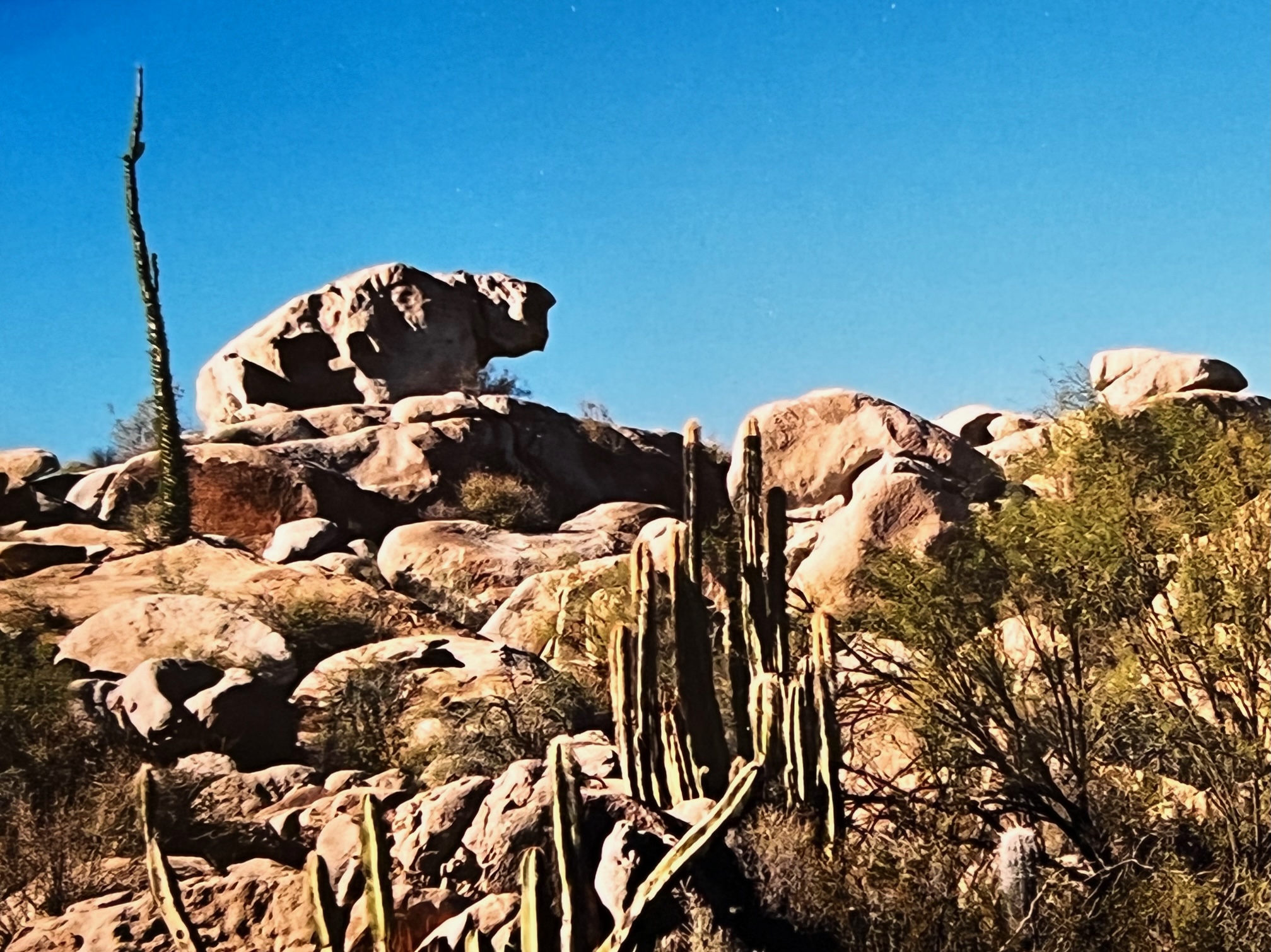 This is maybe a bit off the topic of Interstates and the old days, but is a travel story about highways and byways that might be interesting.

We had a whole ten days off, a fiftieth birthday to celebrate, a new telescope to try out, and a good grasp of Spanish.  A map.  No GPS, smart phone, or travel internet then.

Funny what you can find when you don’t know where you are going.  We had only a vague idea of what to expect when we loaded the world’s smallest cab-over camper onto the 4-cylinder (but 4-wheel drive) Ranger pickup, filled it with gear, loaded Ruby and Wink (our two cattle dogs) into the king cab, and headed south from Oakland towards Baja California in the last few days of 2000.  Maybe camp on the beach, get some sun. We had a whole ten days off, a fiftieth birthday to celebrate, a new telescope to try out, and a good grasp of Spanish.  A map.  No GPS, smart phone, or travel internet.

Baja is desert landscape, cold on winter nights.  The main road starts by Tijuana and quickly becomes two lanes as it runs alongside the Pacific Ocean, houses get sparser, and rocks and cactus take over–fantastic eroded rocks at Catavina, strange Dr. Suess-like cirio trees.  Hours on, we came upon a whale skeleton labeled “El Pabellon” by an upaved parking lot bordered by low sand dunes, providing scant shelter from the wide beach and ocean.  A campsite apparently. Okay, can do. Let’s set up the new “go to” telescope on the beach, starting by calibrating with a few major stars.  Night fell into a spectacular dark sky.  No moon.  Dark over the ocean, dark over the land, brilliant and overwhelming heavens above.  And at around 28 degrees latitude, it turns out that it is not so easy to find the Big Dipper, let alone a north star to guide you. 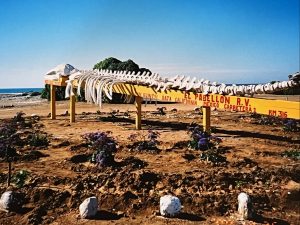 In the morning, we stopped at Guerrero Negro, a bleak town on a spit of land famous for collecting drifting trash from the ocean currents, also a town with a bank and ATM.  We had gotten skeptical looks from some people when we told them of our travel plans—weren’t we concerned about narco-terrorists?  We did run into random military check-points (“do you have any guns or drugs?” “no”) but Baja wasn’t an epicenter.  Still, Sally was a bit nervous when she went to the ATM and saw a group of faces pressed against the glass as she withdrew cash.  She high-tailed it back to the truck, with some of them in pursuit.  “Senora!!!  Senora!!!”  Waving something at her.  “Su tarjeta!”   The bank card she had left in the machine.

The road turns east to cross the peninsula, and right in the middle lies the old oasis and mission site of San Ignacio.  Astonishingly thick palm groves and pools of water are hidden in the desert hills. Tucked closely next to the faded Spanish church on the zocolo (town square), is a museum with local history, where we discovered replicas of impressive cave paintings from the area–people painted in half red, half black, whales, turtles, deer, spears.  Why had we never heard of this?  A tiny tourist office run by eco-tourismo Kuyima told us that visits to the widely-scattered sites were only possible with special permission and a guide, but promised whale watching if we took the long side trip west to the laguna. 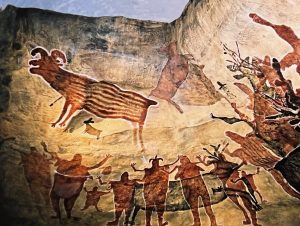 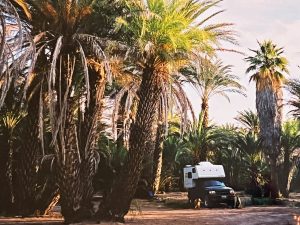 It sounded great, but we reluctantly carried on eastward to the Sea of Cortez and Mulege, another oasis town, and then further south to Playa Coyote, where we had heard we could stay at the beach. And we could.  We met a laid-back community that claimed the scattered palapas for shade, and bought fresh fish, hats or serapes from the daily passing vendors.  Armando, the unofficial greeter who spent a month there each year, helped us rig up our palapa, and we shared stories around a campfire next to his dried cactus-turned-Christmas tree.  He lent us his kayak; we made him shellfish tacos. The Canadian family next to us had driven down from Smithers, halfway up British Columbia, which meant that it took them 16 hours just to get down to the US border, and twice that to Playa Coyote—their yearly odyssey.  At night, the kids looked through the telescope and rewarded us with lots of questions and amazed smiles.  I swore the intensely bright light on the hill could not be a star and must be part of a radio tower–until it rose in the night sky, glorious Sirius. 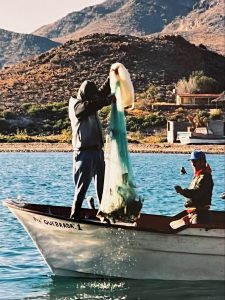 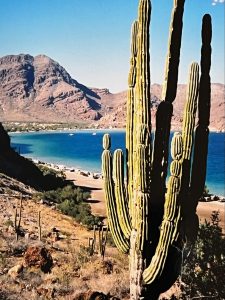 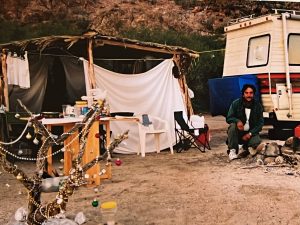 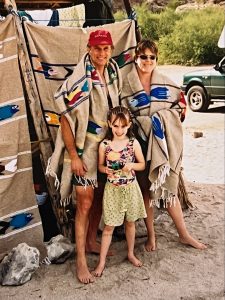 Ultimately, we returned north to San Ignacio.  Enough of the highways.  Time for the byways.  Destination:  Laguna San Ignacio, the large and protected bay on the Pacific side, where the gray whales return each winter to calve and rest before braving a summer off the US northwest coast (and the predator orcas).  Route:  the long and winding, unpaved, and un-signed, road to Camp Kuyima.

As we bumped along the sandy and rocky track towards the Laguna, a good hour on, something was not right.  A flat tire.  And, oops, the back door to the camper had been open and everything was covered with dust–though only a shoe appeared to have bounced out.  Sally, the ex-cab driver, cranked up the rig and changed the tire, maybe a little grumpily.  Hot, sweaty, and dirty, onward. 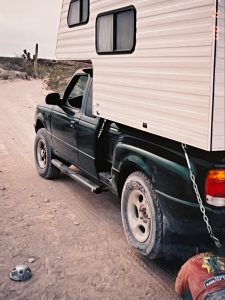 The day was fading as we got near the coast.  The landscape flattened, a light in the distance, a small group of houses.  No, no food or restaurant.  Camp Kuyima?  Hmm, maybe that-a-way, a gesture to the sunset, where we could see nothing.  The track in the sand became split, and split again, a braid of tracks going where?  In the dark now, headlights on but still revealing nothing, not happy, we dead-reckoned west.

And then, a light traveling perpendicular to our course, another vehicle that seemed to be heading back and forth.  A man in a cross of tracks, waving at us.  After some confusion, it seemed he wanted to know if we were looking for Camp Kuyima?  He must have figured any camping vehicle lost in the flats could only be looking for them, and so right he was.  We found a sheltered common room, a warm “sun shower”, a toilet, a place to park the camper.  It was early for whales, but we could maybe see one or two, and some birds in the mangroves on a panga trip in the morning.   Life was good again, even spectacular.  We would return some day for more. 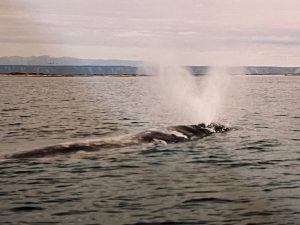 But first, the trip back to Oakland.  Back the rocky road to San Ignacio, back the sandy track.  And once again–a flat tire.  The second flat tire. The first flat had not been repaired, and of course there was no second spare.  Suddenly, the significance of the long lines of curious fences bordering the road, consisting entirely of old tires, sank in.  It was New Year’s Day, and traffic on this road was essentially non-existent.  Maybe the can of Fix-a-Flat would work?  Not a chance—too big a rip.  We sat for a good while contemplating.  At last, a pick-up truck appeared, the cab and bed both crowded with family, all dressed up and heading into town for a New Year’s gathering.  Immediately appreciating our situation, they let us use their spare, and we followed them (slowly, carefully) back to San Ignacio, where they got a friend to open up the llanteria (tire repair) on the holiday and locate a replacement tire for us, since ours was destroyed.  We pressed the dad to take some money (reluctantly, no, no, no–but it is a New Year’s present for the kids, okay, but just for the children).  Funny how what we remember best, among so many things, is the kindness of strangers. 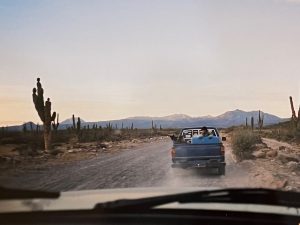 18 Responses to Kindness of Strangers