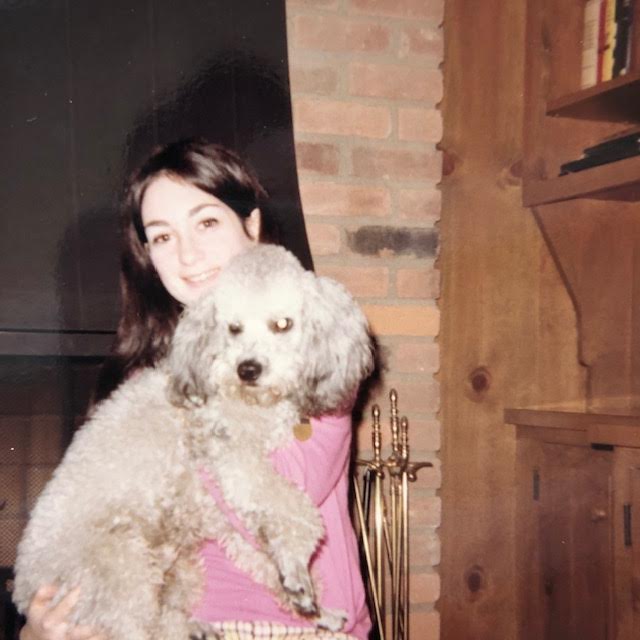 My mother was terrified of dogs. Dogs had been used during the 1906 pogroms against my grandparents in Russia. My grandmother would cross to the other side of the street to avoid coming close to a dog. She instilled that fear in my mother as well. I guess I understood, but I LOVED them and always wanted one, particularly after my brother left for college and I was lonely.

My mother also couldn’t keep a secret. One day in 1966, she spoke with her sister-in-law, Roz Sarason, who had some exciting news. Their French poodle, Jacques, had sired a litter of puppies to help the owner of the female dog raise the money to buy contact lenses from my cousin Steve (Roz’s son), who worked as an optician at the time. Penny, the female poodle had a litter of five cute little puppies. Steve claimed the one female in the litter. The rest were up for sale.

Naturally, the first thing my mother said when I got home from school that day was to tell me about the puppies. Of COURSE I wanted one of those pups. Dad and I went to see them that weekend and chose one for me. Mom was apoplectic, but that’s what she got for not keeping the secret.

The puppies were, indeed, adorable; little bundles of black fur, their silver coats hadn’t yet come in under the puppy fur. These were miniature poodles (not toy but not standard either, just a perfect size for me). We picked one; a lively little male, paid for him, but left him with his mother until he was six weeks old and weaned.

We deliberated about names. His mother was Penny and she had five puppies, so we thought we’d be clever and name him “Nickel” (like “5 pennies”). But this was a pure-bred poodle (though we never gave him a fancy cut, always a “puppy” cut, we left his fur evenly trimmed across his whole body). We needed a name to register him with the American Kennel Club. I was in first year French class in high school and had a limited French vocabulary. I wanted him to be “Nickel of the Woods”, (in French) since we lived in Huntington Woods. But I did not yet know the word for “woods” which would be bois. I knew forêt, which is “forest”. So according to the AKC, my little puppy had the grand name of Nichol des Forêt. Yet, just as I am ALWAYS Betsy, never Elizabeth, my dog was ALWAYS Nicky. I don’t think anyone outside my immediate family even knew his official name.

I was very happy to have some companionship around the house, but my father adored this dog! 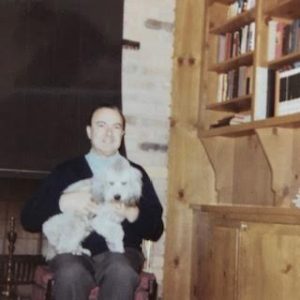 Nicky gave my dad unconditional love, never hassled or nagged him. Walking him gave Dad a reason to get out of the house and go visit friends around the corner, or have a private conversation with me. While Nicky was being trained, Dad took him to his car dealership for the day, so my mother didn’t have to deal with that. Poodles are a very smart breed and Nicky was quick to learn. Like most dogs, he just wanted to be loved and petted. I think that describes a lot of humans too. 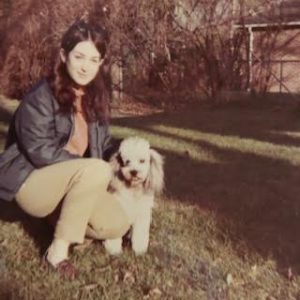 Shortly before leaving for college in our backyard.

Like many dogs, Nicky was deathly afraid of thunder storms and we had some doozies in Detroit. I’d hold him close, as I felt his whole body tremble. I missed him when I went off to college and looked forward to seeing him when I returned home. 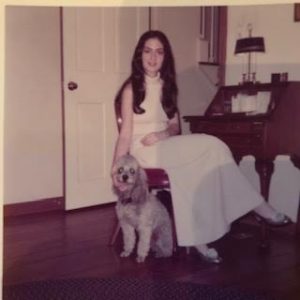 But like so many of the breed, Nicky developed eye problems. His retina atrophied and he went blind. His doctor said he’d be fine as long as nothing in the house changed. My mother left the basement door open once when she went downstairs to do laundry. He bumped into the open door and fell down the steps, hurting himself. I was already married and gone from the household. My mother’s frantic voice reached me after she’d taken him to the vet. He was banged up, but nothing broken.

Shortly after that incident, my parents bought a condo in Laguna Beach, CA with plans to spend part of the winter there. They knew they couldn’t let Nicky languish in a kennel. Dad called me the night they put Nicky down. I understood that he couldn’t survive outside our home. I sincerely mourned the loss of my only childhood pet.