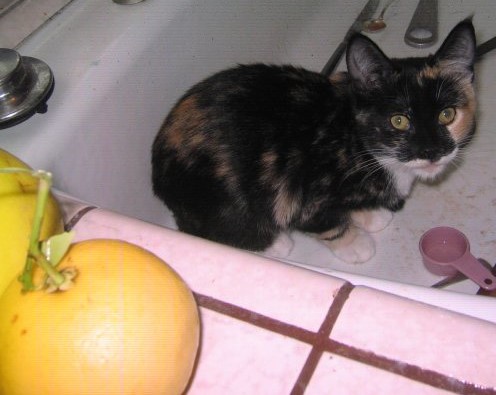 Mitzi in the kitchen sink

I never had a pet of any kind when I was growing up. This may come as a surprise to at least one person here who said, when I expressed concern that some people might not have anything to say on this prompt, “It’s hard to believe that in a long lifetime, everyone hasn’t had one pet.” In fact I know many people who have never had a pet, including one of my sisters, and it was almost by happenstance that I ended up having any.

I never had a pet til I was almost 30, but since then I have lived with Loretta, Hillary, Tipper, and Mitzi, four wonderful cats.

When I bought my first house in 1979, a year after getting my first lawyer job, it turned out that a law school acquaintance who worked in the same office lived in the house across the street. This was incredibly convenient, and we became close friends, at first just carpooling to work, and then eventually spending most of our free time running back and forth to each other’s houses. Somehow she had acquired a kitten, I can’t remember the story behind it, but she was a little ambivalent about it, and hadn’t even given it a name. I had always liked cats, and enjoyed playing with her kitten when I was at her house. Since the cat was always poking her nose into places she didn’t belong and we were telling her to get away, I suggested naming her Loretta, after Sweet Loretta Martin in the song “Get Back,” so that we could say “Get back, Loretta!” in our best Paul McCartney voices. So we did. At some point Jane realized that she was getting too impatient with the cat, and wasn’t being a very good mother. So she gave Loretta to me, along with her litter box and other paraphernalia. I was thrilled, and I loved Loretta dearly. It broke my heart when she got leukemia and died in 1982.

This is the only picture I have of Loretta. It was taken at a Halloween party where I was dressed as a little girl, which is why my hair is in pigtails. I am so sad that I don’t have any other pictures of her, but in those days I almost never took pictures of anything. I am reminded all the time of how much our lives have been changed by having cell phones with cameras. Nowadays we take pictures of everything, from items at the grocery store to the spot where we parked our car at the airport, but I have almost no pictures of any aspect of my life from the ’70s and early ’80s.

I didn’t think about getting another pet until ten years, two children, and one failed marriage later, when my future second husband and I bought a house together. It was his idea, because he had had pets growing up, and he thought it would be nice for us, and, more importantly, nice for the kids to have a pet. I was not interested in a dog, but I did like the idea of another cat. So we went to the animal shelter to look for a kitten, and chose to go on a weekend, because the kids were at their father’s house then. We knew it would be too hard to pick one with them along, since the two of them could never agree on anything. 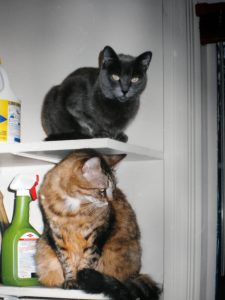 At the shelter there were many sweet kittens to choose from. I fell in love with a fluffy little brown and black tabby who reminded me of Loretta. Ed was much more interested in an elegant all-gray one, which we later learned was a Russian Blue. We were at an impasse. So we solved the problem the only way possible, by adopting them both. Since the 1992 presidential campaign was in full swing, we were inspired to name them Hillary and Tipper, after the candidates’ wives. We joked that if the election went the wrong way, we would have to change their names to Barbara and Marilyn (remember Marilyn Quayle?). But we expected to win that year, and luckily we did, so the names remained, and fit them perfectly. In this picture, Hillary, the Russian blue, is on the top shelf, and Tipper the tabby is on the bottom shelf. We had those cats for eighteen years, and when Hillary died at the end of 2010, Tipper only survived her by a couple of months.

Our current cat actually belongs to Molly, and we are her “grandparents” but we have had custody ever since Molly started college back in 2015. Molly got her as a bat mitzvah present in 2009. She had always been envious of the fact that her older siblings had been able to play with Hillary and Tipper when they were kittens and she had only known them as grown-up cats, so she wanted a kitten of her own. The kitten came with the name Gretel, but Molly didn’t like that name and wanted to change it to something else. We were brainstorming names, and I suggested Mitzi, as in bat mitzvah. Molly agreed, and the name was officially changed.

The featured image is Mitzi as a kitten. As you can see, she was not much bigger than the grapefruit on the counter! Here she is now at twelve years old. 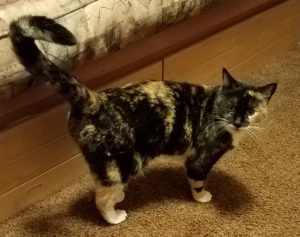 16 Responses to Get Back