Prompted By That Summer
20 comments. 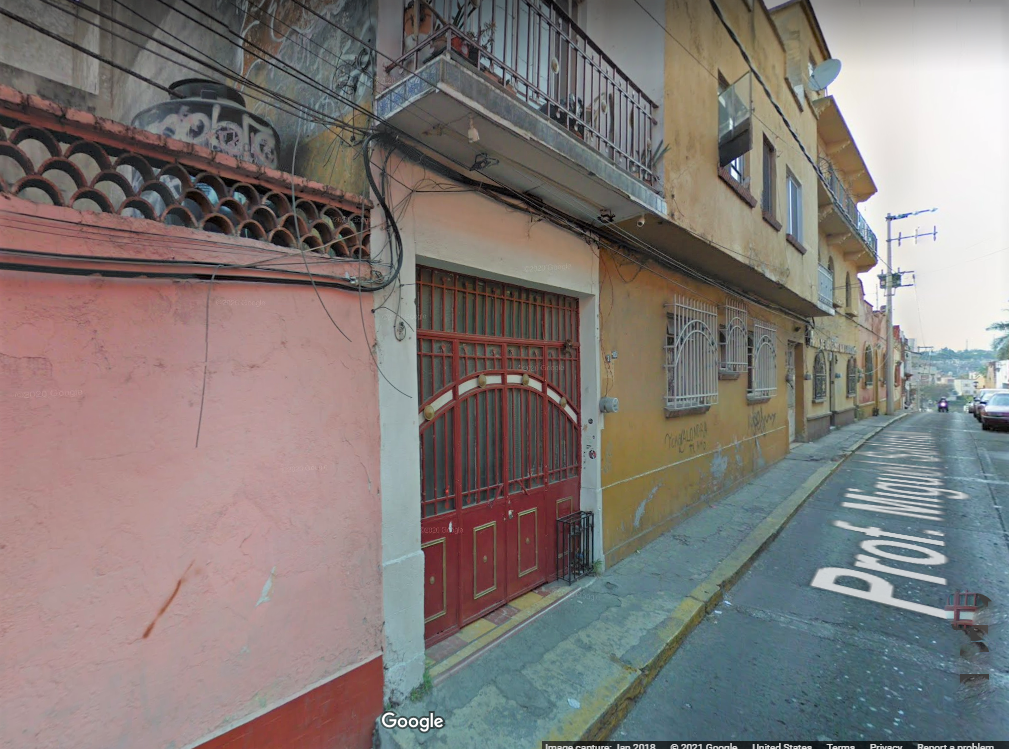 It was a magical summer – exotic, and romantic, and educational too! I will never forget That Summer of 1966.

It was a magical summer - exotic, and romantic, and educational too! I will never forget That Summer.

It was the summer between my sophomore and junior years of high school. I was fourteen years old, turning fifteen at the end of August. My cousin Alice, five years older, was majoring in Spanish at Douglass College, and was going on a summer program at the Universidad de Morelos in Cuernavaca, Mexico, where she would live with a local family for six weeks and take courses at the university. Since they had a program for high school students too, we decided that I should apply and go with her.

Here is the brochure for the program, which I only discovered this week with my other papers. 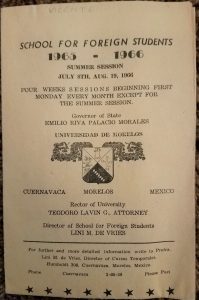 We didn’t request (or want) to be placed with the same family, and we wouldn’t be taking the same courses, but were happy to be able to travel down and back together. In fact, we flew down early and spent a couple of days in Mexico City with some friends of my Aunt Daisy and Uncle Ed, Alice’s parents. These friends were wealthy and Jewish, and gave us a glimpse of another side of life in Mexico.

After this visit, Alice and I took the bus together from Mexico City to Cuernavaca, a trip of about two and a half hours, and then parted ways to go to the houses of our assigned families. I still remember the address of the family I lived with: M. Salinas #3B (they write the house number after the street name). The featured image is the front of the house, courtesy of Google Maps. It didn’t really say “Prof. Miguel Salinas” down the middle of the street, that was added by Google. And I never knew until now that the street was named after this professor, who lived in Cuernavaca from 1878 to 1912. So thank you for that, Google. I only have a vague memory of the outside of the house, so I can’t say if this is how it looked fifty-five years ago. I remember the interior much more clearly. If I had any artistic ability, I could probably draw all of the rooms pretty accurately.

The mother was a widow, and she made a living as a seamstress. She had two older sons, who didn’t spend much time at home, and a daughter, Marina, who was a year younger than I. There was another American girl staying there too. Her name was Cindy, she was from California (how exotic, I thought), and was a year or two older, but still in high school. The mother had two employees for her sewing business, and I think they also did the cooking and cleaning.

Marina had probably learned some English in school, but the mother didn’t have any, so we were forced to speak Spanish all the time at home, which greatly helped us in becoming fluent. Sometimes Cindy and I would slip and start talking to each other in English, but we quickly realized how rude that was, and made ourselves stop, except when we were alone in our bedroom or walking to school.

The school was walking distance from our house, although I couldn’t find it on Google Maps. It’s possible it doesn’t exist any more, or at least not in that location. The only classes I remember are a Spanish language class and a Mexican history class, both of which were required, and met five days a week. According to the schedule I just found tucked into my Spanish book, there were many others offered: Spanish Literature, Sociology, Archeology, Cultural Anthropology, Mexican Art History, and on Fridays from 3-5, Psychology of the Mexican. Two of them are circled in red on my schedule, Archeology and Mexican Art History, so maybe those were my only electives, in addition to the required Spanish and History of Mexico classes. I wonder if I actually attended these elective classes. I still have several pages of my notes, but they are all from the Mexican history class. And since I wasn’t trying to get college credit (or even high school credit), I probably didn’t have to take any exams. Here is the schedule. 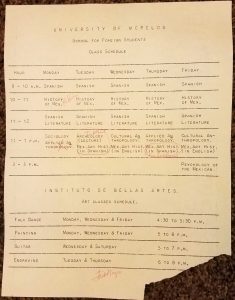 I don’t know why the bottom right corner of the schedule is torn off, maybe I was using it to pass notes. On the back of the paper is written, in my handwriting (cursive!), “I’m going home after this class, wanna come?” I wish I knew who I was writing to, and whether they accepted my invitation or not.

Here is my textbook from the Spanish class – apparently I placed into the Level 3 intensive class. You will notice that the front cover of my Spanish book says “Vicente” in two places, and his name and initials (linked with mine) decorate the back cover as well. If you are sharp-eyed, you also saw it written at the top of the program brochure above. This was the boy I had a mad crush on that summer. More on that in a minute. 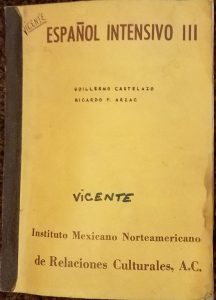 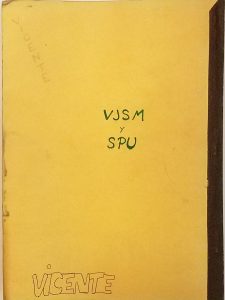 Here is an example of the reading matter I probably spent a lot more time with than any textbook. I was fluent enough in Spanish that I could read it as easily as an American comic book. Looking at it now, I am pleased to realize I can still understand it, since the vocabulary is pretty basic and the plot pretty predictable. 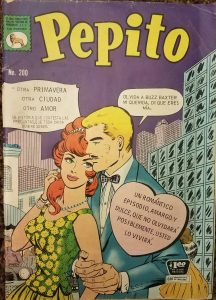 On the cover, the man is saying to the woman, “Forget Buzz Baxter, my darling, say that you are mine.” And inside the heart it says “A romantic episode, bitter and sweet, that you could not possibly forget if you lived it.” I did skim through it to see if she ends up with Buzz Baxter or the blond man, a jounalist named Mike Herald, but it ends with a cliffhanger. “All of Patsy’s friends await her exciting future. Will she hear from Mike? What will happen with Buzz? There are more surprises for Patsy and you.” Not my style of literature these days, but apparently it was when I was fourteen.

Now for my romance with my own “Buzz Baxter.” My roommate Cindy had met a local boy named Bruno, I’m not sure where, and he started coming over to see her. When he wanted to take her out on dates, she insisted that I come along, so he began bringing his older brother with him. Vicente was 19 years old, and very handsome. It never occurred to me until right now, as I am writing this, but Vicente may only have been playing at being my date so that Bruno could have time alone with Cindy. But even if that’s so, he played the part very effectively, and I was totally smitten. Neither Bruno nor Vicente spoke any English, so it forced Cindy and me to get much better at expressing ourselves in Spanish. They had a cream-colored Volkswagen Beetle, and they would come pick us up on weekend days when we didn’t have field trips, or sometimes on weekday evenings, and we would ride all over town with them. I was in heaven!

At the end of the summer, we exchanged addresses and promised to write. I think I wrote one letter to him and he never answered, and that was the end of that. I kept hoping a letter would arrive, but after a few months I gave up.

All in all, it was quite a summer. I lived in a foreign country without my parents (although I had a surrogate Mexican mother). I had my first boyfriend, followed by my first heartbreak when he never wrote. I learned a lot about Mexican culture and history – I even went to church with my Mexican family. I became so fluent in Spanish that by the end of the summer I was dreaming in Spanish. My high school Spanish classes for the next two years were ridiculously easy for me, and I got a 743 on the Spanish Language Achievement Test (remember how the SAT subject matter tests were called Achievements?), thereby placing out of the language requirement at any college I might go to.

My only regrets are that I didn’t continue studying Spanish in college, and that I never went back to Cuernavaca.