That Summer in Europe by Edward Guthmann
25
(30 Stories)

Prompted By That Summer
18 comments. 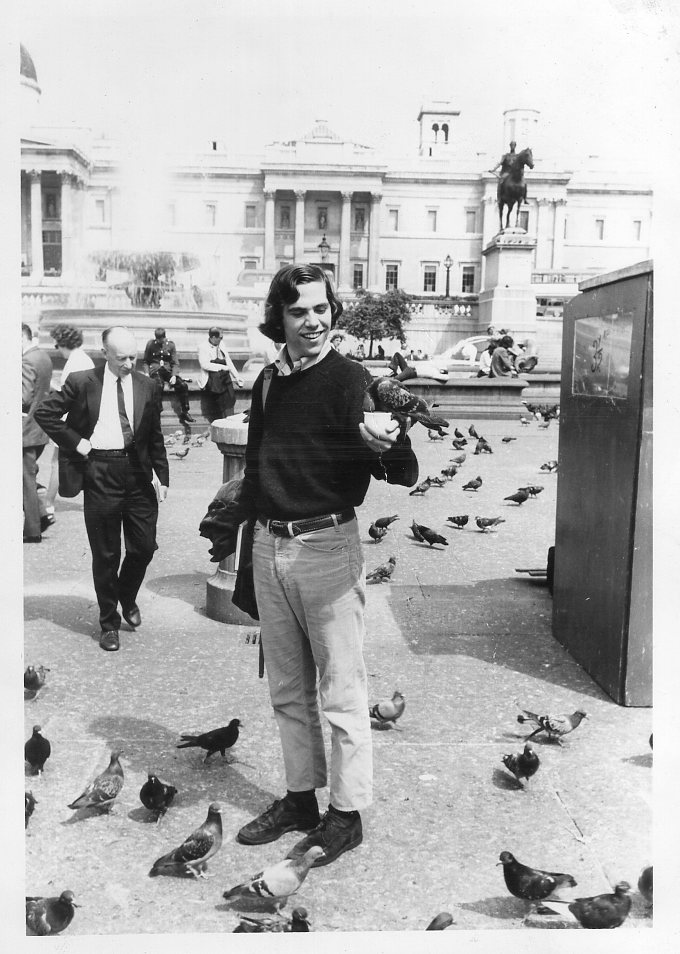 It seemed reasonable to me. I was about to go to Europe for three months, and if I budgeted myself correctly the trip would cost $450 for the entire summer.

So that’s what I did. It was 1971 and I was 20, the summer between my junior and senior years of college. I’d saved money from working in the campus library and with $450 in traveler’s checks, a Eurail Pass, a copy of Arthur Frommer’s Europe on $5 a Day and a borrowed backpack I boarded a charter flight from Oakland to Amsterdam.

I did it alone, because none of my friends had the money or the inclination to go for that long. It didn’t occur to me I’d get lonely, which I often did, or that my $5 daily stipend would prove awfully limiting and sometimes painful. I traveled on the rough: staying in youth hostels that charged the equivalent of $2.15 for bed and breakfast; sleeping occasionally on trains; eating Wimpy burgers for lunch; making dinner from yogurt, cheese and a hunk of bread and eating it on a park bench.

Every single American college student was tramping through Europe that summer, or so it seemed. Time Magazine ran a story about the great exodus and put it on their cover. But there were thousands of young Europeans, Australians and Israelis as well. and what developed was a wide-ranging fraternity of  young and curious, like-minded adventurers. We crossed paths, swapped stories and shared information about bargain flights and cheap hotels, which hostels to avoid and which destinations not to miss.

I slept on cement floors more than once. In Madrid, a dusty youth hostel on the edge of town had no toilet facilities, just holes in the floor and two well-worn grooves to place your feet in. In Munich, hostelers were awakened each morning when a large frau marched through the dormitories banging on an enormous stewpot with a heavy metal spoon. In Geneva, they blasted you awake Waco-style with loud music until you got out of bed. Most hostels required that you vacate after breakfast, and barred you from re-entering until 5 p.m.

That kind of thing gets tiring. A couple of times I took a detour to the countryside north of Paris where my Aunt Betty and Uncle Bob were teaching at the European Bible Institute in Lamorlaye. I could catch up on sleep there and uncouple from the tourism circuit. Eat Aunt Betty’s cooking, do my laundry and enjoy my aunt’s shy, quiet, graceful hospitality. I adored her.

I visited nine countries in 13 weeks, circling clockwise from England and Scotland to France, Spain, Switzerland, Italy, Germany, Denmark and the Netherlands. I got introduced to sangria, tapas and the audacious, dripping-candle architecture of Antoni Gaudi in Barcelona; visited a tiny, remote Danish village called Vistoft where two American friends were apprenticing as ceramicists and escaping the Vietnam War; crossed the English Channel in a hovercraft and, when arriving in France after two weeks in Britain, felt like I’d stepped from dreary black-and-white into a gorgeous Technicolor spectacle. Near the boat dock in Calais you had a shop that sold nothing but cheeses, some in huge, 6-foot-tall wheels. Next to it a wine shop, a patisserie and a flower shop exploding with color and fragrance and something that felt like the celebration of life.

In Barcelona, I was hosted by Raul Alcalay, a Catalan who’d spent a year as foreign exchange student to my home town of West Covina. On the back of Raul’s motor scooter I got a king’s tour of Barcelona and everything designed by the miraculous Gaudi. His family dined at 10 p.m., a multi-course meal that lasted almost till midnight, and later Raul took me to rowdy tavernas where Catalan men played guitar and drunkenly sang Cuban revolutionary songs. At night I slept in the Alcalays’ tiny guest room and felt very fortunate; in another part of the spacious apartment Raul’s lovely mother, 45 years at most, was dying of cancer.

In Denmark I boarded a train in Copenhagen, located on the island of Sjaelland, and headed west. The entire train rode onto a huge ferry that crossed a 14-mile body of water, left the ferry and traveled overland on the island of Fyn, then crossed a short bridge to the Jutland peninsula. In Montreux, that elegant Swiss town on Lake Geneva, I took the greatest train journey of my life. As we headed east to the German-speaking region of Switzerland, a stream of cheerful, rosy-cheeked hikers boarded wearing lederhosen and rucksacks and carrying pointed, hand-carved hiking sticks. The train kept climbing, the Alpine landscape grew lusher and cooler, and by late afternoon we had slowed to a crawl while the train finessed a tangle of tight curves. The scenery was so enchanted that when the train turned to reveal a waterfall filtered through foggy mist, it seemed that everyone on the train – day hikers, old ladies, tourists and children — quietly sighed in unison. Or so it seems to me now in retrospect. A perfect moment.

The train terminated in Interlaken, a resort town high in the Alps. The youth hostel was full but outside the train station I met a lively Dutch family who invited me to share their dinner and spend the night at their camping site next to Lake Thun. Mr. and Mrs. Van Dyk’s kindness and generosity were overwhelming, and their beer was excellent. When it rained buckets that night their son Chris rescued me from the leaky tent they’d loaned me, and set me up on the floor of their caravan trailer. The lightning was thrilling on that magnificent night: with each angry thunderclap the entire valley lit up so brightly – like high noon in July – that you could see the blunt peaks of the Jungfrau, the Eiger and the Mönch in sharp relief.

The following day I thanked the Van Dyks and took a narrow-gauge train on a steep ascent up to Grindelwald, probably the prettiest, most pristine village I’ve ever seen. Rustic chalets with flower boxes at each window, the freshest air you’ve ever tasted, friendly people, amazing vistas. Everything sparkled. I remember speaking to a pair of older hikers who asked how long I’d be staying. When I said one day, they looked sad for me. My memory of Grindelwald is bittersweet, precisely because I couldn’t stay longer and also because I know that if I went back today I would be disappointed by the growth and the clamor of tourism.

My last stop that summer was Amsterdam, where I’d started the journey. I remember standing in a record store where you could rent a turntable by the hour and listen to a variety of LPs. I chose Joni Mitchell’s “Blue,” which had come out that summer. It was about travel, about being young and alone in the world and questioning your path. The song “California,” with its plaintive longing for home and connection and constancy, sounded like she’d written it just for me:

Joni captured an essential aspect of youth in “Blue”: the anticipation of something soon to change, the thrill and anxiety of that anticipation, and the ways in which foreign travel intensifies those thoughts. The day after standing in that Amsterdam record store and falling in love with “Blue” —to this day, it’s still my favorite record— I flew home to California. Out of the $450 in Thomas Cook’s traveler’s checks that I took to Europe in June, I somehow still had $15 left.

That summer in Europe was the beginning of a lifetime of travel – a passion that’s never sated. I don’t travel rough any longer, and sometimes I spend in two days what I spent over three months in 1971. I’ve visited 45 countries so far and all seven continents and I’m impatient as I write this, waiting for Covid to disappear so I can explore again without fear. Travel teaches you so much: geography and other cultures; how to see the world through someone else’s eyes; to think more openly and curiously and without bias.

“The world is a book,” Saint Augustine wrote, “and those who do not travel read only one page.”

18 Responses to That Summer in Europe