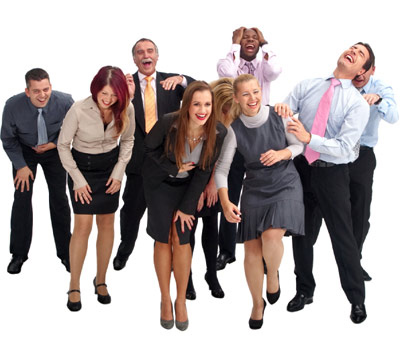 American Laughing Society wants you to take them seriously

Laugh, and the whole world laughs with you. Usually.

Still, Earle Turow is wondering about Las Vegans’ sense of humor — mostly, do they even have one?

The retired clothing manufacturer will soon find out. He recently moved here after residing for 15 years in New Dehli, India, where he was a member of a laughing club.

Now he and his partner in mirth, Ken Horowitz, a local greeting card publisher, are bringing the concept stateside with their recently founded American Laughing Society. Its first official meeting is set for April 5.

Some minor conceptual changes aside, the society is patterned after its Indian counterpart, which first began meeting in a Bombay park two years ago.

There, about 100 members — including Turow — took part in hour-long fits of recreational giggling. They laughed at themselves and each other, but usually at nothing at all.

“Everybody just laughed,” Turow recalls. “In India, (the people) are terrific laughers. They are so good and so spontaneous. Every time you utter something that is funny, they’ll (shake your hand) and laugh.”

The group’s popularity exploded as members began touting the positive changes they noticed in their health — migraines melted away, blood pressure rates dropped, a few even claimed they lost weight — after attending laughing club meetings.

“This is no joke,” Turow contends. “Everybody knows laughter is the best medicine, and it’s a fact.

“Laughter releases endorphins, the natural painkillers in the body. You get all the benefits of this natural drug, and that affects all sorts of things — your brain, energy cells, everything else.”

Mary Roach can attest to the club’s popularity. A contributing editor for Health magazine, she ventured to Bombay last year and observed the club in all of its hilarity.

“They’re absolutely serious,” Roach said recently from San Francisco. “They see it a little bit like a form of yoga. They’d do some breathing exercises in addition to the laughing. They feel like it sort of clears their lungs a bit.”

Not to mention that it was really funny. “There’s something about seeing people laughing,” she says. “It’s kind of contagious. I was certainly amused.”

There are more than 200,000 members in 80 clubs throughout India. Even Japan, where clubs recently began forming, has jumped on the jocularity bandwagon.

Las Vegas is next. Admittedly, Turow and Horowitz say they’ve got their work cut up … er, out for them.

“It takes an incredible amount of work, especially when you’re dealing with something abstract,” says Turow, who’s anticipating a crowd of 1,000 would-be laughers to attend the first meeting.

Spontaneity is the key at these gatherings.

The sessions start with members running through a series of laughs — tee-hees turn into ha-has, which become hearty ho-hos and, before you know it, teary-eyed belly-jigglers abound.

Then, “What we hope to do,” Horowitz explains, “is break down into groups, so that we can have laugh meetings almost on a daily basis … so it will fit into people’s schedules.”

In essence, they’ll take time out to chuckle.

She’s one of 25 “mirth masters” that Turow and Horowitz have recruited to help lead the laughter. (“They’re like our cheerleaders,” Horowitz says.)

Cohen, owner of the Trinkets Etc. clothing boutique in Las Vegas, recalls how at a recent mirth-masters-only meeting, “we actually just stood there and laughed.”

“You feel like a fool, you feel silly, but when you see everybody doing it in a group, you laugh because you (think), ‘Look at that idiot over there. Do I look that silly?'”

Goofy or not, Cohen says, laughing has made her feel better. “Usually, I’m so tired and sluggish,” she says. But after the meeting, “I felt like I was full of energy. I felt like I’d exercised.”

Roach, on the other hand, isn’t as sure that the society will be a smirking success.

She thinks that Americans’ inhibitions will have them laughing at — not with — the group.

“I somehow can’t quite see it here,” she says. “People are a lot more skeptical here. They’re not going to be as accepting and say, ‘Laughing’s good. Let’s go.'”

Also, “It just seems that Bombay was such a surreal place … and the laughing clubs were not that much different than what other people were doing for health (reasons).”

But how about just spreading some cheer?

Instead of yukking it up for the heck — or the health — of it, Turow and Horowitz want to put the nonprofit society to good use via “laugh-ins” at schools, hospitals and retirement homes.

The society’s long-term goal, however, is to expand nationwide and have enough members to form a human chain — hands clasped — in a laugh line across America. Target date: New Year’s Day 2000.

Note: If you remember my story on the Dice prompt earlier this month, you just might have connected the dots — 1997, Las Vegas, greeting card publisher — and figured out that this archived article from the Las Vegas Sun newspaper featured my then husband, Ken. Alas, the American Laughing Society never really caught on in Vegas, but it sure provided me with the perfect story for this prompt!

7 Responses to The Best Medicine