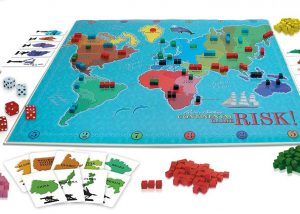 Perhaps a more accurate name for the game is “Revenge!”

When we were too old to dress up as army men and re-fight WWII in the back yard, we found strategic board games where we could use our minds AND still kill each other, figuratively. The battlefield we returned to repeatedly was Risk!

The blue map, the wooden blocks, and the pastel country card sets with their silhouettes of Napoleonic artillery, cavalry and soldiery still sit in a box in my garage. I think I had never heard of Asian provinces like Irkutsk and Yakutsk until I played this game, nor did I get as angry as I did when I inevitably got ganged-up on during a marathon match.

Sometimes we would carefully set the board with its hundreds of pieces under the bed to continue the next day. We quickly learned it was better to create a small paper map and just write army locations on it. The games went on and on invariably because someone showed mercy before eliminating an opponent’s last armies. Then there were the conspiracies and back room deals to share conquest of a particular continent. And the retaliations that came with a particularly dastardly move. Perhaps a more accurate name for the game is “Revenge!”

Once you learned the winning strategies of where to attack, when to stop, and the key timing needed to win a card set to get bonus armies, you could predict the ebb and flow based on the behavior and mood of the players. Mockery, blatant aggression, and pacifism, conniving, destruction, shouting and laughing – all were ingredients of this action-packed contest based on the dice roll of war for the dining room table.

7 Responses to This Means War!