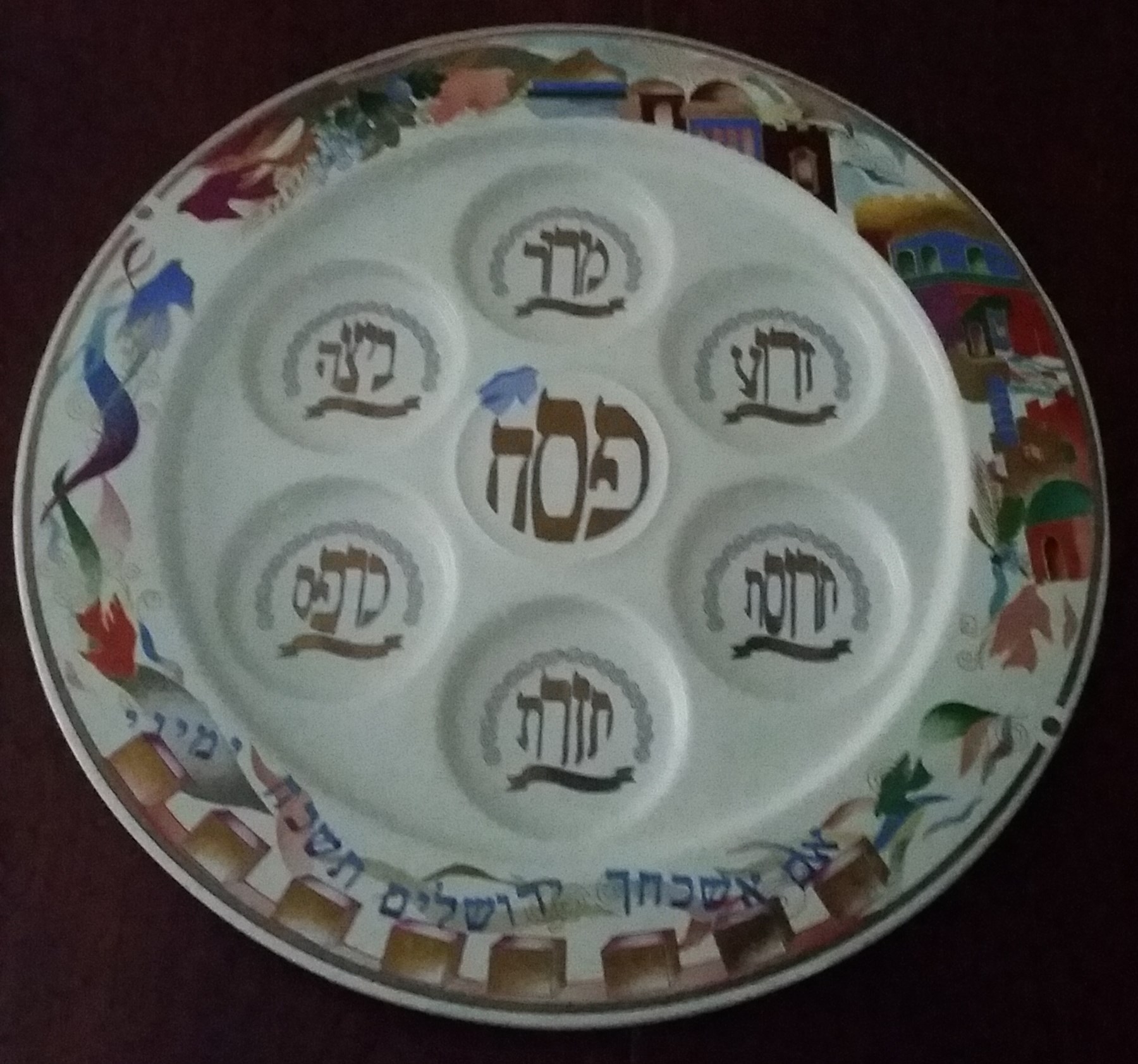 My beautiful seder plate from Israel

Faith, for me, is a complicated topic. As I said in an earlier Retrospect story, I mostly don’t believe in God. But for some reason I’m not quite ready to rule out the possibility entirely. For instance, all through my years in school, when I was nervous about an exam, I would talk to God, saying “if I get an A on this exam, I’ll believe in you.” And even now, when I’m on a turbulent flight, I find myself saying “please don’t let this plane crash.” Who am I talking to? I don’t know.

I think I found it hard to believe in God once I learned about the Holocaust, and the pogroms in Russia that caused my ancestors to flee. The entire history of the Jewish people revolves around persecution, and is supposed to show us that God ultimately saved us, by parting the Red Sea, or making Esther the queen of Persia, or whatever. But then why didn’t God stop the Nazis? Or the Cossacks? It didn’t make sense to me.

I never asked my parents if they believed in God, and now it is too late. I’m pretty sure they didn’t though. When I was seven, I started religious school at my temple, which I didn’t love but didn’t hate either. The next year I said I didn’t want to go any more. I think all kids say that, my kids said it multiple times. It’s mainly the having to get up on Sunday mornings that is objectionable, not the content once they get there. Anyway, my parents just said okay fine, you don’t have to go any more. We didn’t even have a discussion about it. Not what I was expecting! I was happy that this meant I could relax on Sunday mornings, go get lox and bagels with my grandfather, just have a lazy day. It wasn’t until many years later that I regretted being a religious-school dropout and wished they had made me keep going. Learning Hebrew is much easier for a young brain than it is for a middle-aged one, as I discovered to my dismay when I tried to study it along with my children as they were preparing for their bat and bar mitzvahs!

I wish I could believe that there is a Heaven, and that my parents are there hangin’ out, and someday I will get to see them again. It would certainly make the idea of death more palatable. But it would take a lot more faith than I can muster to believe that such a place exists.

Regardless of my doubts about God and Heaven, I am very committed to Judaism. I love singing in the temple choir, the beautiful Hebrew prayers set to music (and transliterated, fortunately). I treasure the stories of all the holidays, and the rituals that go with them. The Passover seder, where we eat matzah because there wasn’t time for the bread to rise, and where we splatter red wine on our plates for each of the ten plagues that were visited on Egypt. Purim, where everyone wears costumes, and we act out the story of Esther and Haman, cheering every time Esther’s name is mentioned and booing, hissing, and rattling groggers at every mention of Haman. Lighting the menorah and playing dreidel on Chanukah. Rosh Hashanah, where we dip apples in honey to signify a sweet new year, and we throw bread into the water to signify casting away our sins. Breaking the fast at the end of Yom Kippur, where we joyously consume plates of herring in sour cream with the rest of our temple family.

It does seem like a lot of the tradition is about food. And yes, I do love the food that goes with all the holidays. But even more I love the sense of community I get from my synagogue at home, and from the Jewish people I meet when I travel. Maybe because we have always been a minority, and often a persecuted minority, there is a feeling of kinship with strangers when I discover they are Jewish.

When my mother died in February of this year, it was my temple family who helped me through it (along with my real family, of course, and also my Retrospect family when you gave me such wonderful comments on my story about her, This Story Is Not About Cooking). The rabbi and the cantor both called me to offer their support as soon as they heard the news. I met with the rabbi two days after my mother died when I could barely talk about her without bursting into tears. The rabbi asked me if I wanted to have a shiva service, which would be held within the week after burial, and I said I don’t know, I don’t think I can do anything right now. Then she told me there was something called shloshim, which comes at the end of 30 days of mourning. So eventually I decided to have a shloshim service. I’m so glad I did! The rabbi and cantor both came to my house, along with about 40 other people — choir members, mah jongg players, my book group, the old Girl Scout troop, colleagues from work, and more. We had a beautiful service with music (clarinet, violin, and piano, as well as voices), eulogies (I read my Retrospect story), and poems, and yes, a couple of prayers including, of course, the Kaddish. Performing this ritual, surrounded by people who cared about me, was incredibly healing.

This week is Passover, and it was important to me to have a seder on Monday, the first night. I made my charoset from the same recipe I use every year, a mixture of apples, walnuts, cinnamon, honey, and wine that represents the bricks and mortar used by the Israelites in Egypt. We had the horseradish, the shank bone, the roasted egg, the greens, and the bitter herbs, each in its little compartment on the seder plate. Of course we also had the feminist orange, added after a rabbi 20 years ago allegedly said “Women belong on the bimah as much as an orange belongs on the seder plate.” Sure, we rushed through a lot of the ritual and skipped a bunch of pages in the Haggadah, but we covered the basics. We were slaves in Egypt and now we are free. Sometimes traditions can just be comforting, even if you don’t really have faith.

Faith?
by Charles Degelman
Which Club Should I Join?
by mike7353