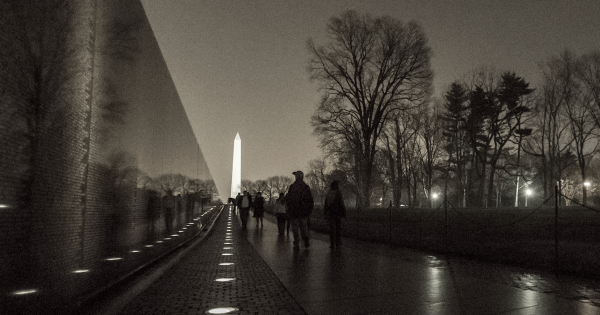 A year into his presidency, Donald Trump is increasingly vilified as coarse, crude, uncouth. Even members of his own party openly criticize him. Protesters are organizing for more and (they hope) ever larger street demonstrations. Deep divisions along racial, gender, educational, and generational lines are pulling American society apart. All-out war with North Korea seems increasingly possible.

You must not be too goddamn smart or you wouldn’t be here!

This age of Trump, tweets, and terrorism seems marooned in the perpetual present, unmoored from historical context. Yet we’ve seen this movie before, and it’s called the “Year 1968.” So what did the “present moment” feel like 50 years ago? Does President Trump (the same age as I) reflect and remember? Here are my memories from the winter of 1968.

Pulling guard duty at Fort Dix, New Jersey, in the darkest, early morning hours, he could be you, this Everyman—any one of 1,857,304 young men drafted during the Vietnam War. It’s bitterly cold, as you pace back and forth in front of the motor pool’s padlocked gate; a Southern boy, you’ve never been so cold, so cold. If you briskly move the M-1 rifle from shoulder to shoulder every few steps, maybe you’ll feel warmer.

The hawk is out. The hawk is bad tonight. That’s what you now find yourself calling the biting northwest wind gusts—the hawk! Slang so wonderfully expressive, you’re momentarily grateful you’re a U.S. Army draftee; for your fellow draftees, blacks from Chicago’s South Side and New York’s Bedford–Stuyvesant, people you would have never befriended but for the Army, are teaching you a whole new way of seeing the world.

The wind chill finds its way into every crevice of your induction-day-issued field jacket, which hangs loose and limp on your now skinny frame, since you’ve shed at least 20 pounds during basic training. In your all-white college fraternity, just a few months earlier, your beer belly and love handles were good-times badges, worn as proudly as your drill sergeant wears his Purple Heart.

You spent New Year’s Eve killing time, back and forth, parading around the motor pool’s perimeter. You wondered what Pam, your girlfriend when you left, was doing that night. Probably at a party somewhere, drinking Jack Daniel’s–laced eggnog, with a TV in the background showing the ball drop at Times Square. Was she with another guy? On the telephone a few nights before, you could hardly hear her with all the noise in the barracks. What did she say? That she was going with friends to see The Graduate? You thought that’s what she said. She sounded happy but you would have felt better if she had sounded sad.

Here you are now, and you could never have imagined it like this. Your head shaved bare, your olive green-draped body shivering with cold, pacing back and forth, going nowhere, supposedly guarding a bunch of deuce-and-a-halves … just killing time. You keep shifting the M-1 rifle from shoulder to shoulder, trying to keep warm. And trying not to think too much about then and now. Back then, in college still, you could have never imagined this now. Nor can you imagine yourself as an old man, a half century hence, looking back, remembering as best you can these early morning hours of 1968, much less writing about it. It’s easier to imagine yourself dead.

“I understand you went to college?”

“Well, you must not be too goddamn smart or you wouldn’t be here!”

Why don’t you just drop your rifle and walk away? Walk all the way to Canada … Hitchhike! You could, you know. But you don’t. The same way you could have avoided the draft altogether if, as the sergeant says, you weren’t so stupid. Remember that psychiatrist who volunteered to get you a medical deferment? “It’s not about patriotism,” he said. “It’s about courage, and it takes more courage to say ‘no’ than to go.”

Classified 4-F (“medically deferred,” as Trump is), the last three months would never have happened: inducted at Fort Jackson, South Carolina … having all the books you had lovingly brought with you dumped out of your duffel and confiscated … learning to yell, “Kill!” while stabbing a dummy with a bayonet during Basic … watching helplessly as a fellow draftee, hit in the head in an inexcusable training accident, writhes in the heat and the humidity and the dust, finally carried away in an improvised stretcher, only to die (the chaplain would reluctantly tell those who ask) a few hours later in the infirmary. What were his parents told? you still wonder.

More powerful than patriotism, more motivational than fear, you realize, is simple curiosity. What will happen next? As in any mystery or suspense novel, that’s what propels you through basic training and now, at Fort Dix, advanced training for your MOS (Military Occupational Specialty). What will happen (or be revealed) next? You get a taste of randomness; is free will overrated, you wonder? And you begin to question everything else you learned from your parent’s generation … is it all a lie?

Walter Nicklin is a longtime journalist and publisher who divides his time between Virginia and Maine. He can be found on Twitter @RoadTripRedux.

3 Responses to 1968 a Half Century Later