After our Brandeis graduation in May, 1974, Christie relocated from Chicago to Boston that autumn. She stayed a year before her father summoned her to work for him at Playboy. She worked as a freelance writer, doing pieces for Boston After Dark and a long piece on Robert Pirsig and Zen and the Art of Motorcycle Maintenance for a national magazine. I worked a mundane job doing data entry, Dan was in grad school and we had plenty of time to socialize weekly, cooking for each other (yes, I cooked dinner every night in the early years of my marriage).

Backgammon was all the rage and Christie taught us how to play. We’d play chouettes, a form of the game played by three or more players using the doubling cube (the large cube seen in the Featured photo), shifting rivalries and discussions of moves with the players. It was a fun way to spend the evening.

We bought a beautiful leather portable set that we’d use when she came to our apartment when we’d get together. She even gave us two pairs of special dice with rounded off corners (you can see her initials carved into them). We learned to play fast and use strategy. The game was so popular that there was tournament play on Sunday afternoons at a restaurant in Cambridge: 33 Dunster Street (both the restaurant name and its location). We went a few times, entered the tournament (a small entrance fee to play) and played until we were eliminated. I took second place once and won $50! A real jackpot for us in those days. We treated Christie to dinner.

That summer, we took our first-ever trip to California. Neither Dan nor I had traveled much, so this was a big deal. We started in LA and worked our way up the coast to visit our friends the Zussmans in the Bay Area. On Sunday, we visited Christie at the Playboy Mansion. 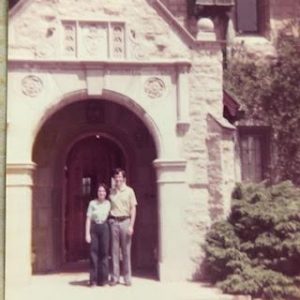 Sundays were busy days there; Hef opened his home for his friends and their friends. Tennis for all comers (Dan played with Mickey Dolenz of the Monkees), hanging out by the pool (the Jacuzzi Grotto was being cleaned), wandering around, people-gazing. Late afternoon, we went to Christie’s room to shower and change for dinner. Unfortunately, she had to keep it locked, as so many people trooped through the house that personal items had a way of disappearing.

We had not stuck by Christie the entire day, so didn’t know when she would appear. Dan stayed by the room while I went off in search of my friend. I looked through the house and grounds but didn’t find her. Yet I returned to Dan breathless with excitement, “I just saw Kareem Abdul-Jabaar! He is more than two feet taller than me.” Eventually, Christie came, unlocked the room and we all got ready for the vast buffet dinner, followed by the screening of “Russian Roulette”, a new, though forgettable spy movie starring George Segal. We sat up front on one of the couches with Christie. Hef always screened a first-run movie on Sunday nights.

Later in the evening, Hef, Christie and a few of his close friends repaired to Hef’s study to play backgammon. They played for $200 a point. We watched. That was way too rich for us. We sat across from another set-up board. Abdul-Jabaar walked in, sat down opposite us and stretched out his LONG legs. We asked him if he wanted to play. “I don’t gamble”, he replied. We assured him that we didn’t play for money either. Still, he declined and we just watched the other game going on next to us, late into the evening.