Cheeseburger in Paradise by Suzy
200
(297 Stories)

Prompted By Learning To Cook
9 comments. 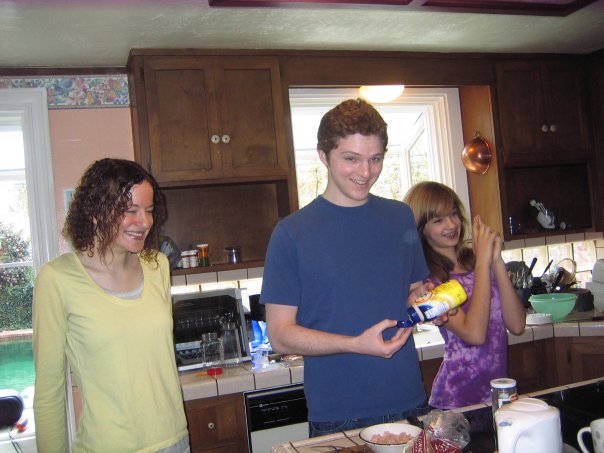 My mother neither taught me to cook nor encouraged me to learn. She cooked for the family because she had to, but she never enjoyed it. And she never invited her daughters to cook with her. If I ever did any cooking at all at home, it would have been to open a can of Campbell’s soup, add the requisite can of water, and stir it until it was ready. From Campbell’s I progressed to Lipton’s, where you actually had to measure the water and then put the ingredients in when it was boiling, but that was the extent of it.

I realized there is nothing very hard about cooking as long as you follow the recipe (and don't pick a recipe with too many steps).

In seventh and eighth grade, the girls at my school were required to take Home Ec. It was not just cooking, it also included a unit on sewing and one on childcare, but the cooking unit was the best, because we got to eat what we made. Assuming it turned out edible. Since my high school was on a college campus, we used the college facilities, which included a Home Ec “lab” with multiple shiny, well-equipped kitchens. However, I have no memory of what we actually cooked, and I certainly didn’t take any of those recipes with me past eighth grade. (Btw, the boys had one semester of Nutrition in seventh grade, and then for a year and a half they had a free period. We girls were pretty frosted about that!)

A few months after I graduated from college, I went to work for the US Department of Transportation, and moved into a house in Inman Square, Cambridge. To celebrate my first venture at living on my own, my mother gave me two cookbooks. The first, a large hardcover book, was The Joy of Cooking by Irma Rombauer. This has been a classic for generations. In a parody of Happy Hanukkah and Merry Christmas, she had inscribed it “Happy Homemaking and Merry Cooking! from December 1972 on, whenever you’re in the mood.” This book has been surprisingly useful over the years, and I still consult it from time to time.

The second cookbook was The I Hate to Cook Book by Peg Bracken. This book was written in 1960, when of course women had to cook all the time whether they liked it or not. It is full of easy recipes, with humorous commentary sprinkled generously throughout. (It also has wonderful illustrations by Hilary Knight, the same artist who illustrated the Eloise books.) I actually made many of the dishes in the book during my early years on my own. Once I progressed to recipes that didn’t involve using things out of cans, I stopped looking at it. I have written about it in two previous stories, Green Onions and one actually called The I Hate to Cook Book, so I won’t repeat the hilarious recipe for Skid Road Stroganoff here.

In both of my marriages, it has been my husband who has done most of the cooking. Currently I am responsible for making dinner on Thursday nights, and one night a week seems like plenty. When Molly is home, I generally get her to cook with me, and in fact, she frequently finds interesting recipes online that we try out together. During the times when Sabrina has been at home too, the three of us actually had fun cooking together, and Sabrina contributed a lot of British recipes, as described in the Green Onions story I referred to earlier.

At some point I realized that there is nothing particularly hard about cooking as long as you follow the recipe (and don’t pick a recipe with too many steps). I admire people who can just make it up as they go, but to me that seems like a recipe for disaster.

9 Responses to Cheeseburger in Paradise