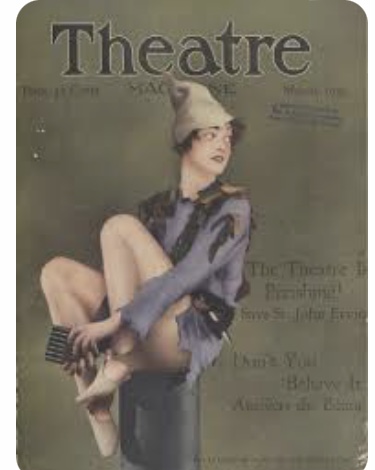 When my mother was young her parents took her to Broadway to see Peter Pan,  the title role played by the actress Eva Le Gallienne who famously flew on wires over the heads of the audience.

The London-born Le G as she was called,  who died in 1991 at age 92,  was not only a celebrated actress of the day,  but a pioneering figure in the American repertory theatre movement which enabled today’s Off-Broadway.   In fact Le G founded the Civic Repertory Theatre where she not only starred as Peter Pan,  but produced and directed the show as well.

An openly gay woman in an era when lesbianism was stigmatized,  Le G had love affairs with Tululah Bankhead and others in the theatre world then known as “shadow actresses”.

But for my mother,  then a spellbound little girl sitting in that New York theatre,  Le G was Peter Pan,  the boy who wouldn’t grow up in James Barrie’s classic story being brought to life up on the stage.

And when Tinker Bell drank the poison,  my mother remembered how Peter beseeched the audience,  “Boys and girls,  if you believe in fairies clap your hands and you will save her!”

And then the theatre seemed to reverberate with the sound of hundreds of hands clapping,  and to save Tinker Bell my mother clapped hers,   and she cried out with the other children,  “I do,  I do!  I believe in fairies!”

14 Responses to “Do you believe in fairies?”