Getting to Martha’s Vineyard by Betsy Pfau
200
(276 Stories)

Prompted By Highways and Byways
21 comments. 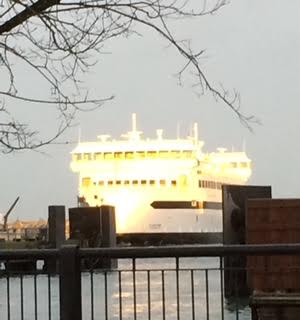 The ferry, as the clouds break after a storm

To get to Martha’s Vineyard, an island in the Atlantic Ocean, 7 miles off the coast of Massachusetts, one must drive on various types of roads and take a scheduled ferry. It has been a tourist destination since the mid-1800s when people arrived by horse carts. Now there are highways for much of the drive.

I live 90 miles from Woods Hole, where one drives to catch the ferry (the one to Nantucket leaves from Hyannis, further down the Cape). It is all highway until we reach the Bourne Bridge, built in the early 1930s, which connects the mainland to Cape Cod over the Cape Cod Canal, and is now in need of major repairs (deferred infrastructure). Once, when we had to pick up our children from school on the Friday of Memorial Day weekend, we encountered a 5 mile backup there. We missed our boat. Now, we can schedule our ferries (during peak times they are reservation-only) at times when we know we will not encounter traffic. We expect it to take between an hour and a half to two hours for the drive, depending on traffic. 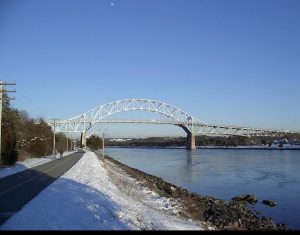 Once across, we are on Cape Cod. It should be a half hour drive to the ferry, but we drop down, first to a 2 lane highway, then a lane of traffic in each direction, driving through the town of Falmouth, stop lights and all, a very busy place in summer months. Eventually, we take the right turn toward Woods Hole for the final 4 miles (and one traffic light) before the staging area for the Steamship Authority. We must arrive a half hour before our scheduled departure, as the boat comes in, unloads, then we load, get settled and go.

These days, with COVID, we tend to just stay in our car, but we don’t have to. There is seating on deck, and refreshments and WiFi available. The trip across takes 45 minutes. The Featured photo is the newest ferry – Island Home – seen as light broke out after a huge storm. We were the second to last car to get onto the boat that December day in the port of Vineyard Haven, having outlasted dozens who gave up their place in line. Ferries are cancelled in bad weather.

There are two ports on Martha’s Vineyard, both on the eastern end of the island, one in Vineyard Haven, which stays open year-round, as it is more sheltered from possible storms. Oak Bluffs is open during the busiest months of the season, but sits further east and is more exposed to the elements. Depending on traffic, it takes 15-20 minutes to get from the port to our home. The roads are not fast and can be quite congested with traffic. The road between Oak Bluffs and Edgartown drives along State Beach, a long, narrow strip, frequented by happy families, and famous for the “Jaws Bridge” under which the shark appears and attacks the swimmers. It is very busy during the summer.

The roads from the two towns converge at “the Triangle”, which now has the main Edgartown post office, a large hardware store, great meat market, pharmacy, parking; all the conveniences that moved out town over the past few decades as real estate became too expensive. It is a huge bottleneck. Traffic can back up for 20 or 30 minutes in August at that choke point.

Past there, it is one slow lane in each direction with lots of stores on each side of the road and traffic trying to enter from all sides. The main grocery story is a bit down the road on the left. This is Upper Main Street. There is also the main gas station in Edgartown on the left, so lots of cars dodging in and out.

Just beyond this point, the road splits again. Main Street continues on the left, but will become one way into the heart of the Village of Edgartown. The right fork is Cooke Street, a small, two-way street. Cannon Ball Park (a Civil War Memorial with canons and stack of balls) is in the center of the triangle formed by the divergence of the streets. I take Cooke Street to my house, as it is one way, and I cannot turn onto it from Main Street.

Fork in the road, entering Edgartown

I pass an old cemetery, interesting to wander through, finding names on the headstones that are on the antique village homes and streets throughout the island. One cross street takes you up-island, toward the airport (just 10 minutes away), and beyond, toward the western part of the island, full of rolling hills, farms, larger estates, stone walls, exquisite views across glacial ponds and out to the ocean. People live there who want more land, solitude, don’t mind long drives to buy provisions or get to the ferry. 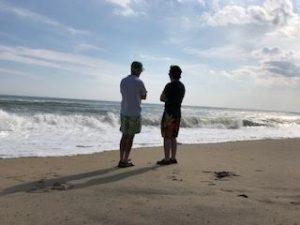 South Beach after a storm; erosion has affected the dunes and taken much of the beach

The next intersection brings one to Katama, the beachy area of Edgartown. South Beach, the huge, rolling south-facing beach is the main beach for the area. It is 3 miles from my home, not really walkable, but an easy drive. One more block, a left turn, and I am a block from my home, in the heart of the village of Edgartown. It is one-way, narrow street. There is some on-street parking. At some times of the day, people illegally park, making it difficult to turn into my driveway. It is fun to live where I do, but does have some inconveniences.

We are south of Main Street. North of Main Street, walking along North Water Street (all the streets are narrow, one way streets), one gets to the largest hotel on the island, the Harbor View, which looks out on the Edgartown Light House and its own beach, with a sandy path down. During the summer, the harbor is full of boats. One can sit all day, watching the activity in the harbor. 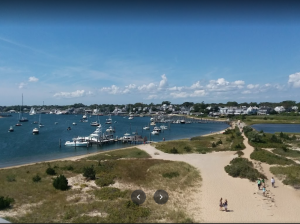 Katama, the “beachy” section of Edgartown, is full of wonderful homes as well. The friends who first brought us to the island, 35 years ago, live there. After visiting them twice, we rented in that section for four seasons before purchasing our home 25 years ago. We lived on a dirt road that was difficult to ride a bike off. Our friends live off Turkeyland Cove Road, which is where the Obamas bought a few years ago. They rented the house that season and purchased it in the autumn. It was the buzz of the island all summer.

This past summer was Obama’s 60th birthday. He had planned to hold a big party for himself, but with COVID still running high, he scaled it back. There is a homeowner’s association and he sent a gift basket to everyone who lives in that area, including a handwritten note, begging their tolerance, saying it wouldn’t happen again for another decade. My friend appreciated the gesture. The area overlooks Edgartown Great Pond, a huge glacial pond, cut away as the glaciers receded. The area was developed a few decades ago, but remains quite secluded and the roads are still dirt (though our friend’s driveway is gravel). Francine has 5 acres of land and her own tennis court. She used to have a view out to water, but the trees have grown too tall over the years. It only takes us a few minutes to run back and forth between our homes, though they feel so different. 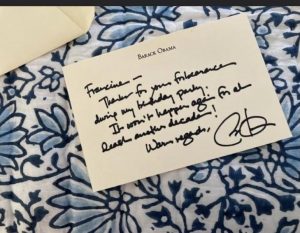 21 Responses to Getting to Martha’s Vineyard