Prompted By What My Mother Told Me
19 comments. 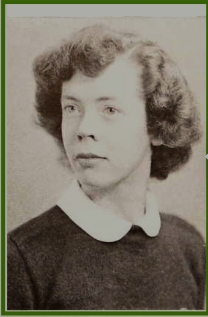 Although my mother had a sweet and loving personality, it hid a steely determination to do what she wanted, even if it was not something girls were supposed to do. Born in 1923, she grew up in what was then a semi-rural area outside of Springfield, Massachusetts. She was considered a tomboy because she rode her own horse and helped care for her family’s dogs, chickens, and other animals. Once her younger sister was coming home on the school bus, when she saw my mother out in front of the house, mowing the lawn (this was in the days before powered lawn mowers) and dressed in jeans, which women didn’t wear in those days. Her younger sister was so embarrassed, she didn’t get off the bus and rode to the next stop, so no one would think she was related to that person.

My mother was the one who taught me that girls CAN do that.

When the U.S. entered the Second World War, my mother’s brother, who was a year and a half younger than she was, volunteered for the army. Shortly after, my mother left college and signed up for what was then called the Women’s Marine Corps. When I asked her, many years later, why she had volunteered, she said that if it was something her brother should do, it was something she should do too. Although women were not sent overseas at that time, she was stationed at an aircraft salvage plant in North Carolina and rose through the ranks to become a staff sergeant before she left at the end of the war two years later.

After the war, my mother went back to the college she had left to join the Women’s Marine Corps. But first, she decided to take summer courses at the University of California, all the way across the country from her home in Massachusetts. Over her mother’s objections, she took a week-long bus ride alone across the country to get there.

Once both my parents finished college, they married in Massachusetts and set off in my mother’s old car for San Diego, my father’s first assignment in the Navy. My mother’s mother was reportedly sobbing as they left, both to see her daughter married and because she thought they’d never make it to California in that old car. I am their first child, born while my father was stationed in San Diego, and I have several photos of my mother holding me that she sent to her mother back in Massachusetts. Looking at them and reading the handwritten captions on the back, I can imagine how alone my mother must have felt, so far from home, with a new baby and my father away at sea so much of the time.

She went on to have four children and a couple of years after her youngest child entered elementary school, my mother went to work in the school library. At that time, very few of my classmates had mothers who worked outside the home. Many years later, she told me why. Apparently, she and my father had been saving to send their children to college when they realized they would be unlikely to save enough for all four of us. At that point, my father said that if they couldn’t save enough, at least they could send the boys to college. My mother responded, “Over my dead body,” and went out the next day and started looking for work. So I have her to thank for my opportunity to go to college.

In high school, both my sister and I were good at math and science, which was not what girls were supposed to do in those days, especially in South Carolina, where we went to high school. But my mother never let us slack off because of peer pressure. She always told us how proud she was of us and that she expected us to do our best, regardless of what anyone else thought about it.

When the older of my two brothers dropped out of college, my mother took the money they had saved for his college, got a masters degree in library science, and became a professional librarian. (He later went back, after four years in the Air Force, and paid for his degree on the GI Bill.) She continued to work, even after my father’s retirement, until she was almost 70.

In her later years, she became an active member of her local chapter of the National Organization for Women (NOW) in the Tidewater area of Virginia. She said she was one of their most effective leafleters, because when people saw this short (she was barely 5 feet tall), smiling, elderly woman approaching them, they didn’t hesitate to accept the flyer she was holding. They probably thought she was passing out information about a blood drive or something and were surprised when they saw it was a NOW leaflet.

After my father died, my mother told me a story. She had been out riding her bicycle for exercise in the neighborhood, when she came across a woman who was raking leaves in her yard and crying. My mother immediately stopped to see if she could help. The woman told her that she had recently been widowed and was trying to continue on with the life she and her husband had, but was finding it difficult without him. I don’t know what my mother told her, but to me she said that after your husband dies, you can’t just keep on doing the same things. Like it or not, she said, your life is now different and you have to embrace your new life. Which she did, selling the house where she had lived with my father and moving to Pennsylvania to a retirement community nearer her grandchildren.

I have written in other stories (My Mother, the Librarian; My Mother’s Faith) of the tremendous influence my mother had on my life. I don’t doubt at all that her example of being true to herself regardless of what anyone else thought has been the template for so much of what I have been able to accomplish in my life.

19 Responses to Girls Can Do That