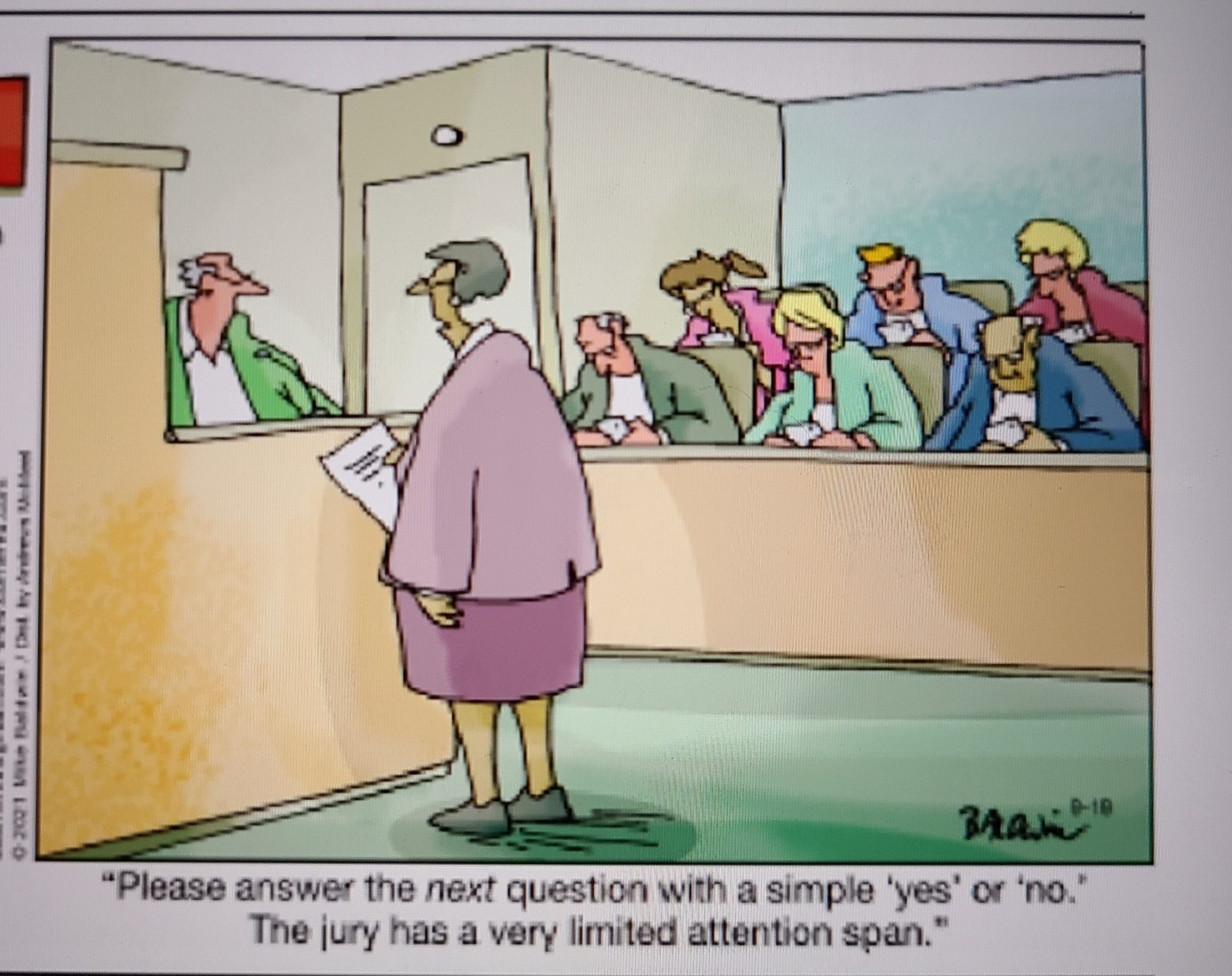 ,In this cartoon, which appeared in my newspaper on Sunday as I was starting to think about writing this story, all the jurors are looking at their phones. Is that how it started, this business of shorter and shorter attention spans? The distraction of a smart phone, like a whole computer in your pocket. Or maybe it was Twitter, where people learned to express themselves in 140 characters.

In this cartoon, all the jurors are looking at their phones. Is that how it started, these shorter and shorter attention spans?

TLDR is an abbreviation that probably started as textspeak. It stands for Too Long, Didn’t Read. When you send someone an article that explains in detail a point you were perhaps trying to make, they might respond TLDR, especially if they are your child. I myself have this reaction to a lot of things I see these days, but I don’t think it’s because my attention span has gotten shorter, I think it’s because people tend to blather on a lot longer than they used to. Does this contradict what I said in the previous paragraph about people limiting themselves to 140 characters? Not really, because it is when they are not on Twitter and have no externally imposed limitations that they don’t feel the need to edit themselves and consequently may make the same point multiple ways. Back in the days when you had to write on paper, with a pen or pencil, people were more economical with what they said. At least that’s my theory. Now you can just type away endlessly, and maybe not even bother to proofread. 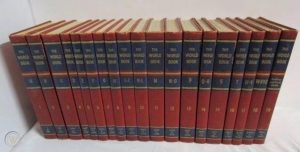 When I was young, I could read for hours, it didn’t matter if it was a novel or a history book (preferably about the kings and queens of England) or even the World Book Encyclopedia. I would take down a volume from the shelf and read the whole thing! I can still read for hours, although now the chances are much greater that I will get interrupted. And I do much better with an actual book or magazine than one that is online or on an e-reader. If I’m sitting in front of a computer or tablet, I start thinking maybe I’ll just check facebook, or I’ll check my library account, or I’ll answer an email. The ability to open multiple tabs is just too tempting, and eventually I forget about whatever I’m reading.

The prompt asks whether we listen to lectures or speeches without accompanying power points or video presentations. This morning, as I was beginning to write this story, I was on a Zoom with Larry Bacow, the president of Harvard. It was an interview conducted by an exuberant, smiley young woman, which may have been part of the problem. The questions she asked him were not necessarily the questions I would have liked him to answer. Despite the fact that he is an engaging and articulate speaker, my mind started wandering about ten minutes in. I don’t think the problem was the lack of power points or videos, I think it was just that I was sitting at my computer, and also had my phone, so there were an unlimited number of other sites I could look at while still listening to Larry. Any new “likes” on my latest facebook post? Any moves to make in my Words With Friends games? Any emails or texts that I need to respond to? If I had been sitting in an auditorium watching him in person, I think he would have had my full attention. Maybe even for the entire hour of the event. 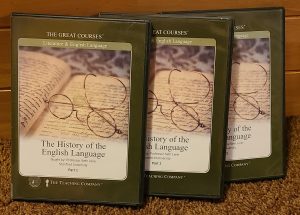 On the other hand, about a dozen years ago my husband and I ordered two courses from The Great Courses catalogue, one on the history of the English language and one called “The Joy of Thinking: The Beauty and Power of Classical Mathematical Ideas.” We started watching the English one first. There were no audio-visual aids whatsoever, it was purely a series of lectures by a Stanford professor. Most of the time, the camera was just on him, standing at a lectern. Occasionally, for variety, the camera would pan over the audience in the classroom. They all seemed attentive. But I just could not stay awake. Maybe watching after dinner was a bad idea, but there was no other feasible time. There were 6 discs, with 6 lectures per disc, each one thirty minutes long. Some nights, if I was still awake at the end of the first lecture we watched, my husband would go on to the next one. I was guaranteed to be asleep before that one was over. We made it through 15 lectures, not even halfway, and then gave up. We still have them though. Maybe we’ll try the Mathematics one at some point, and see if that professor is less soporific. The title is pretty intriguing (which is why we ordered it in the first place). I have to admit that I have been spoiled by watching documentaries on PBS, where they have beautiful videography, lots of different people speaking, and sometimes even little cartoons. Maybe they figured out that it was the only way to keep people’s attention. It certainly would have kept mine better than watching a single professor standing at a lectern.

This prompt also makes me wonder about the popularity of the RetroFlash feature we introduced in November 2020. Is the desire to write a story in only one hundred words the result of a shorter attention span? I don’t think so, because it can actually be harder and more time-consuming to figure out how to express yourself in exactly one hundred words than it would be to use many more words. However, reading a RetroFlash obviously takes a lot less time. So maybe there are readers with short attention spans who appreciate the shortness of those pieces. If you are still paying attention, you can address that question in the comments.

18 Responses to It Won’t Be Long