Prompted By Nannies and Babysitters
14 comments. 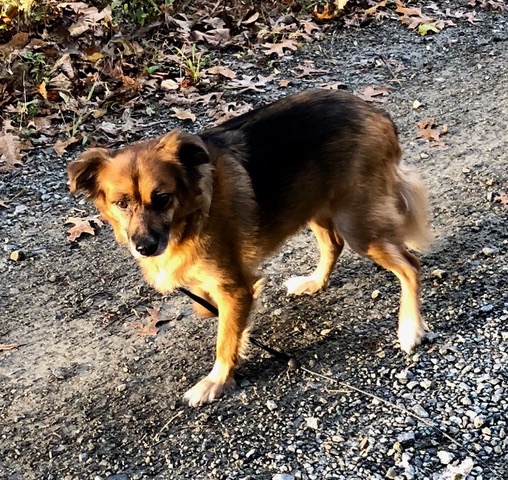 What the hell.  Here goes.

My partner, Dina’s mother Barbara, was going out with her for support, and Dina needed someone to look after her pup, whom she called “Monkey”. I told her to forget about boarding, especially because Monkey had been a shelter pup, and volunteered to look after him at our house.

I had not intended to write this week, but reading the troubling stories posted to date prompts me to put something out that sounds in a different tone.

I remember nothing of babysitters from my early years, and I think fathers of our generation really have little in the way of experience with babysitters other than acting as paymaster and providing transportation.  My experiences with same are unremarkable.  And I recall few stories from contemporaries about their experiences, other than the continuing, and often very funny saga of a colleague in our law firm at the time, and her husband, a research chemist Pfizer, who employed a series of Swedish au pairs.  So, fittingly, I suppose, for those who view us boomers as exalting our own experiences as unique or the best or, whatever, I’ll make this about me.

My partner’s daughter, Dina, adopted a mutt from a shelter in Texas early last year, just prior to relocating to the Hudson Valley.  Looming large before her was something that I’ll just call the “Event” here, which grew out of a traumatic experience about two years prior.  The Event would stretch over several days and take place in southern California.  My partner, Dina’s mother Barbara, was going out with her for support, and Dina needed someone to look after her pup, whom she called “Monkey”.  I told her to forget about boarding, especially because Monkey had been a shelter pup, and volunteered to look after him at our house.

Like many shelter dogs and rescues, Monkey had been traumatized at some point or points in his life. As a result, he was a real scaredy bear, fearful of many, many things.  Early on with Dina Monkey had spent a lot of time under the bed.

I have extensive experience with dog rescue.  [Hint: stay tuned for the next prompt.]  I have dealt with all sorts of dogs and dog issues.  I felt I could capably handle Monkey.  Dina warned me, however, that Monkey was a weird dog.  Ha!  A challenge.

When the day finally came I drove Barbara and Dina to meet their car service ride to the airport first thing in the morning.  Dina, who had spent the night at our house, said her goodbyes to Monkey but left him in his portable crate, a wonderfully inventive canvas igloo that served as Monkey’s comfortable refuge away from home.  When I returned, I decided to take Monkey out for a walk, so I cheerfully entered the bedroom that housed his crate and, without thinking, unzipped the door to the crate.  And Monkey immediately scooted under the queen bed.  Dang!  Ok little fella, game on. I let him be and made my breakfast.

When I next checked he was exactly where he had been.  Using his leash as a lure I got him within reaching distance and gently pulled him out.  Our walk was uneventful: he was a great one for walking.  When I returned I figured I would just let him go back under the bed, knowing I could coax him out and that now he would begin to associate me with “fun”, the way that children tend to do with their dads.  That afternoon we spent some time in our fenced pool enclosure (the pool had long ago been closed up for the winter), and I let Monkey off the leash.  He had a great time exploring, and I thought I would experiment to see if he had been trained in any way.  Sure enough,  someone had whistle trained him, and he came on command.  Later that afternoon, back inside, I let him have the run of my office, and, finding no bed, Monkey made do under a love seat.  At one point he poked his head out to look at me and I raised my hand to wave and say hello.  Monkey startled and dove under the love seat.  Clearly, he had been hit in the past. 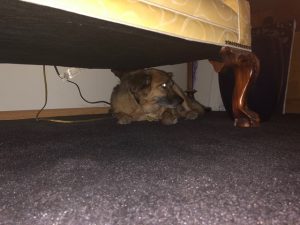 Over the ensuing days we developed a routine. Many, many walks. I let him off leash in the pool area again the next day, which was quite windy, and Monkey was thoroughly spooked by the rustling leaves and sat by my side, quaking.  Didn’t try that again.  And I decided to try a technique I had used successfully in the past with rescue.  I kept Monkey in the bedroom where his crate was because he knew it to be a safe place. I would drop in two or three times a day and just sit on the floor, reading, making little effort to interact.  Just to let him get comfortable with me.  I noticed that while he still stayed under the bed, he moved gradually much closer to the edge and away from the middle.  On the day of Dina and Barbara’s return, after my dinner in what would be the last time, I came to “his” room and once again sat on the floor.  This time Monkey was close to the far edge of the bed.  I started to read.  After a short time, I heard him move but he remained out of sight.  Then after a bit, he stuck his nose around the corner of the bed nearest me.  And then he trotted over and plopped himself in my lap.  Game over.  We both had “won”. 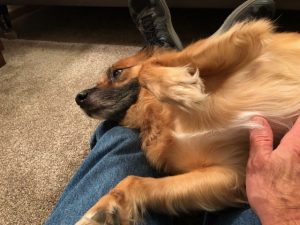