My Name is Barbara… by Barbara Buckles
50
(76 Stories) 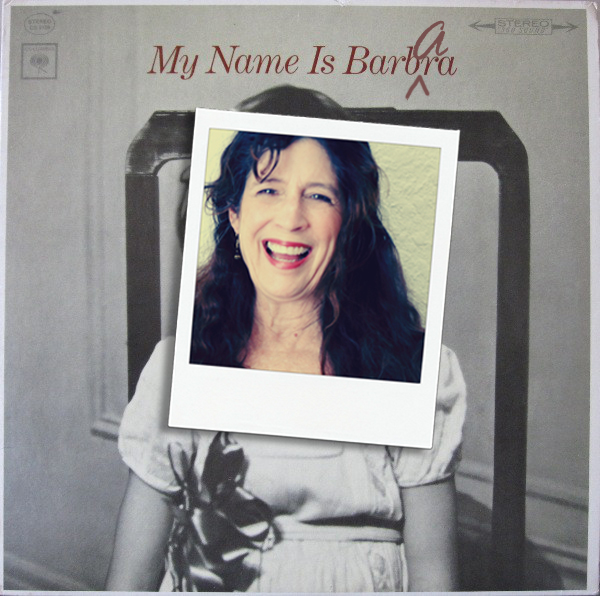 …not Barbra a la Streisand. They’re pronounced pretty much the same in English, but in Spanish, my name is pronounced Bar-bar-a, with a slight roll of the ‘r’s. I do like the musicality of that as opposed to the rather dull thud of “bra,” although I remember some guy somewhere along the line who must have derived some kind of juvenile kick out of emphasizing it — “Hey, BarBRA!”

Barbi Benton pretty much owned the spelling of her name, and in the 80s, despite the fact that we had the same hairdo, I was dismissive of her anyway, for being in Playboy, and for being Hugh Hefner’s main squeeze.

As a kid I was Barby with a ‘y,’ except for a short stretch, I think it might have been a week or two when I was around ten, when I insisted on being called “Beanie.” I had adopted a habit of saying “Oh, beans,” whenever something went wrong and  thought it would be cute if everyone called me Beanie. It really wasn’t, and thankfully it didn’t stick.

In high school I was always just Barbara because there was already a Barb, a Barby with a ‘y,’ and a Bobbi in my group. No Babs, but that was an outdated nickname by then. 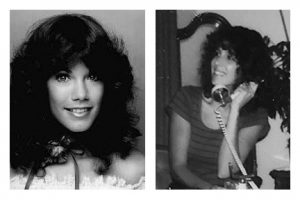 Barbi Benton pretty much owned the spelling of her name, and in the 80s, despite the fact that we had the same hairdo, I was dismissive of her anyway, for being in Playboy, and for being Hugh Hefner’s main squeeze.

And now of course we come to Barbie with an ‘ie,’ as in Barbie doll. And wouldn’t you know, in the 90s I married a Ken and thus became a Barbie with an ‘ie.’ Barbie and Ken, Ken and Barbie, they go together like hugs and kisses. Speaking of which. One year I came up with the bright idea of creating a unique anniversary card for said husband featuring a photo of said dolls. As I didn’t play with dolls, I dashed — always hyper excited in the development stage of an art project — to the toy store on Hollywood Boulevard, bought some, went home and set up a photo shoot. I was going for a romantic vibe, a sweet kiss or a hug, but as I began toying with them, well, you know how it goes, one thing led to another, and the next thing I knew I was back at the toy store buying a Barbie bed. And a Barbie best friend, Midge. AND a friend for Ken, Steven. 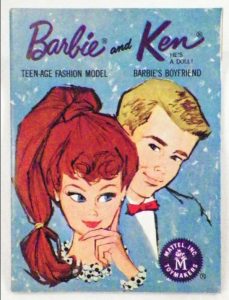 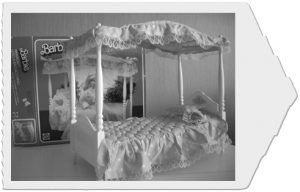 I never did make that card. Instead I gifted the photos to my husband in an envelope labeled “Ken & Barbie – Dirty Pix.” Big, big hit! After Ken passed away some years later, I ended up with the collection. Although I have digital copies, the originals are somewhere in storage in a now-yellowing envelope. Some day, somebody may find them. And no doubt really wonder about me.

These days my granddaughters call me Baba, my family and the majority of my close friends call me Barb, and a select few call me Babs. And now I like the retro vibe of it.

14 Responses to My Name is Barbara…