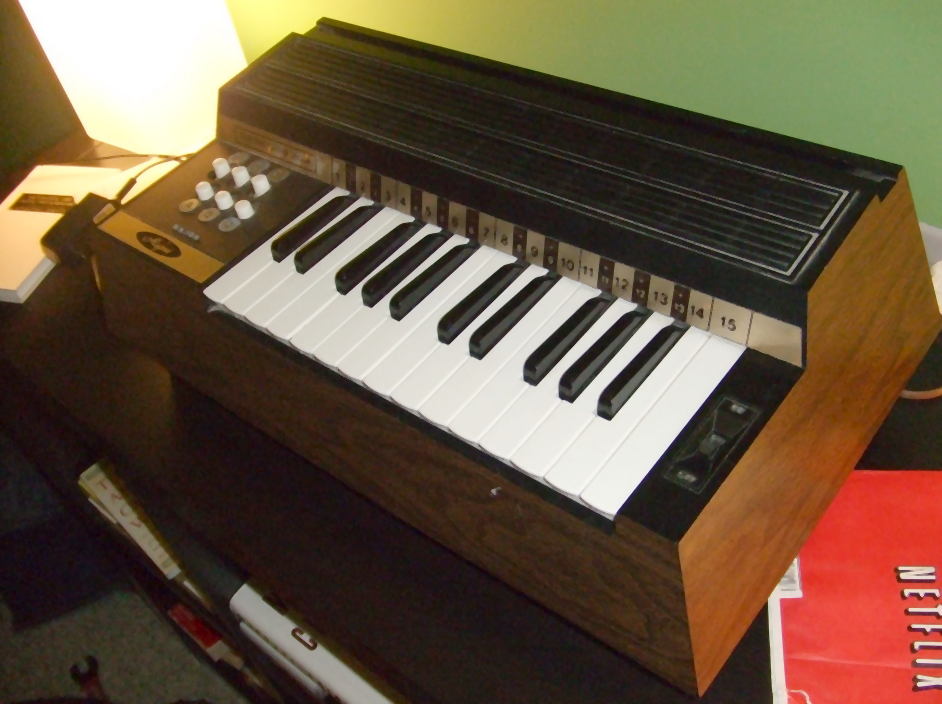 My family has had a few feuds, but they were long ago and I only heard of them as rumors and legends when I was very young.  One involved a marriage deemed unsuitable for ethnic reasons, resulting in disowning of a daughter and lifelong estrangement of grandkids from grandparents. This prompted my Dad to say, of one of his brothers, “He always was a stupid son of a bitch.” That is all I remember; not much on which to base a story.

But I guess the gulf that separates me from my one-year-younger brother is sort of a feud, albeit a low level one. We’re not enemies. We mainly…aren’t much of anything.

It started early. We first noticed that “Stan” was different when he and I were gifted a pair of “Magnus Jewel Chord Organs” one Christmas. We might have been five or six. The keys were numbered, so a beginner could haltingly pick out a tune with relative ease from the book of songs with numbered guides that was supplied with the instrument.  Not very instructive as to music theory, but conceptually not much different than guitar tablature.

Over the next few days Stan and I played with the organs, hacking through the old public-domain standards  in the book. And then he started playing without the book. Then he discovered riffs, arpeggios, keyboard runs, alternative keys, etc. All by himself, with no instruction of any kind.

My brother Stan was thus revealed as a musical prodigy. Over the years he’d master music theory and a number of instruments (he once wrote a concerto for didgeridoo) although drums were and are his first love.

Too often, great artistic talent is accompanied by various emotional or psychological problems. The history of music alone is replete with tales of troubled, abrasive, narcissistic, self-destructive and even psychopathic artists. Stan did not escape this fate.

Through childhood and adolescence and through adult life, he struggled with alcoholism, drug problems, anger issues, impulsiveness and self-centeredness. Once, in our early teens, just before we left on a family vacation, he stole all of my records and gave them away to his friends; Stan loved being popular. When I found them gone, he seemed genuinely shocked that I was as upset as I was. His efforts to retrieve them were minimal; he left it up to me. I got fewer than half of them back.

I learned many times that Stan was not to be trusted. Stan did what he felt like doing at the time, and he had poor impulse control.

At the same time he could be oddly protective. Once a neighbor kid on a bike ran into me, knocking me down. Purely accidental, and no major injuries resulted, but Stan, who was sitting on our porch, calmly trotted over, smiling, and punched him in the face, telling him as he laid on the street, “that’s for hurting my brother.” Again, poor impulse control.

He managed to alienate many people in his life, including our parents, two wives and two children. And me. Later in her life, my Mom was actually afraid of him, to the extent that she told the nursing home staff to check IDs on all her visitors and to under no circumstances allow him in. I won’t detail the various reasons they so fell out, because I have only her side and he denies it all, but I do lean toward her depiction of events being true. The one thing I can confirm was terrible enough on its own.

When my Mom died in April of 2020. I debated not telling him, such was my reluctance to even talk to him. But in the end, I did tell him of her death. This elicited an unexpected response.

He said that he wanted to rebuild our relationship.

I was surprised as hell, and non-committal. I know that people can and do change as they get older and occasionally wiser. I have. But the list of his offenses is long and goes back far. He has never fully given up drinking. And he has a habit of saying anything to get what he wants, with the charm and persuasiveness I associate with psychopaths. I had to wonder what he wanted. Not Mom’s money; she left none. So what? Nothing? Was he actually sincere?

So we talked a bit, on line for the most part. Mostly small stuff, but I did learn something startling, a reason for his resentment of me. I was the academic one, the kid who got effortless As and never caused any trouble. He was more rebellious, less scholastically minded and struggled a bit with classwork that was not music. So all through grade school the teachers, having had me the year before, bombarded him with a litany of “why can’t you be more like David?” “David is so smart, how can you be so stupid?”

Unsurprisingly he grew tired of this, of being belittled, of having me used as  a club to bruise his ego. Kids don’t generally do nuance well, so he blamed me, wanted to stay as far from me as possible.

Thanks a lot, morons!

Stan told me that it was only years later, in therapy, that his shrink pointed out to him that I too had been a mere child, that I had had nothing to do with the teachers being idiots. Blaming me had long since become a habit, though, and we had not had any sort of relationship for years, so nothing changed. Until our Mom died.

You may wonder how it’s going after two and a half years. The sad truth is, it isn’t. I told him I was always ready to talk, but he kept coming up with odd reasons not to, including “no privacy when his wife is home.” He was afraid she might eavesdrop. I felt uneasy about that; we were not planning a crime or discussing anything shameful. I see nothing to hide.

Anyway, communication petered out, with messages from me usually going unanswered. I eventually gave up. I recently heard that he had some health problems and left a message of good wishes. I have not received a response. I have to conclude that he has lost interest, and am left wondering what he was up to in the first place.

Some broken things cannot be mended.

9 Responses to Not With a Feud, But a Whimper