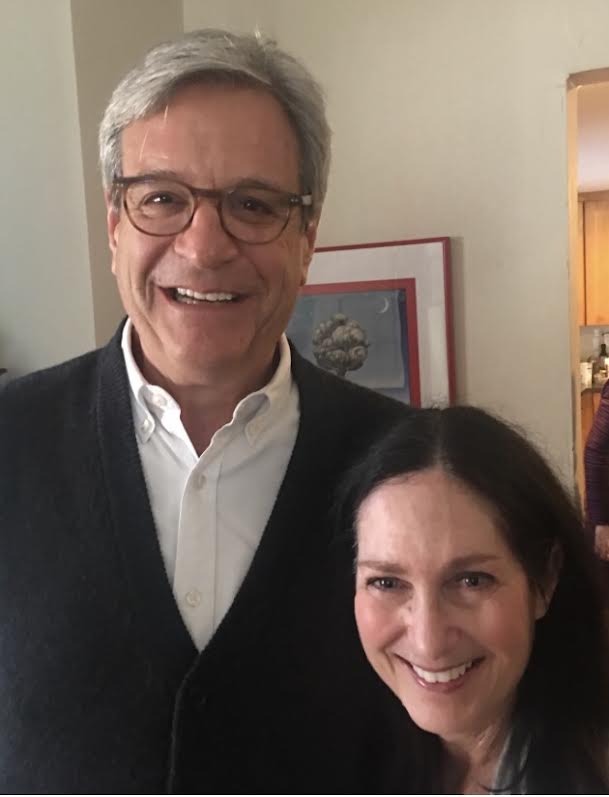 With cousin Mike Perlis in 2017

My maternal grandmother, Belle Perlis (Anglicized from Potocksy) Stein, was the oldest of nine siblings, all of whom came to the Unites States from Bialystock, Russia (territorial Lithuanian). My grandparents came in 1906, as I’ve written about several times in the past. They landed on Ellis Island and made their way to Toledo, lived in a two-flat with Grandma’s mother. I knew all of her siblings, who were younger and seemed to mostly reside in Detroit. 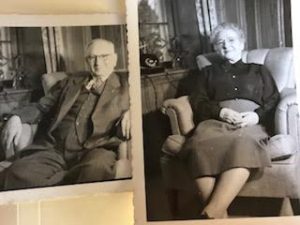 Grandpa and Grandma (Zalman/Sam and Belle Stein), in my Detroit den, early 1950s.

Grandpa (Zalman/Samuel Beckenstein, shortened to Stein in the U.S.) had a more complicated lineage. I know of two brothers, Joseph and Willie, who came to the States. One brother went to Argentina. I don’t even know his name. His two sisters and their families stayed behind (except for one niece, Paula, who married a Zionist and escaped to Palestine in 1939). All the rest perished in the Holocaust. My grandfather never spoke of them. However, a family of first cousins, named the Weinners, lived in Detroit. 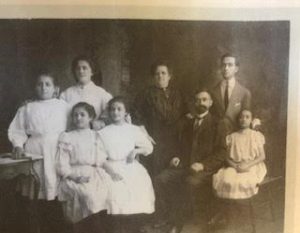 1st generation Weinner family, Selma upper left, Harris upper right (both married siblings of my grandmother; the family are cousins of my grandfather).

Perhaps because there were so many in Grandma’s family, there was a lot of marriage between her family and Grandpa’s family. His brother Joe married her sister Millie. And two Weinner siblings, Selma and Harris, married two more of Grandma’s siblings: Beatrice (the sweetest and most beautiful of the Perlis women) married Harris, and Selma married Moe. So there were lots of double first cousins and complicated family relationships. There were also lots of professionals among the men, doctors and lawyers, who did well professionally.

As the youngest of the generation of first cousins, I don’t know the cause of the family feud at my grandparents’ level. I heard it had something to do with a real estate investment gone sour between Harris and Moe. My older cousins may know. One recently told me there was competition between my grandmother and her sister-in-law, Selma and their two daughters (Cornelia and Corinne), both deemed “old” to not yet be married, but my mother married before her cousin Corinne and my cousin says this caused the feud to erupt.

All I know is that my mother, Cornelia (called Connie; she hated “Cornelia”), and her cousin Corinne, named for the same ancestor, who lived a few blocks from us in Huntington Woods, did not speak to one another and I was not allowed to speak with her daughter Sue, though she was one grade ahead of me at the same high school. Crazy, right? And this was decades and a generation after the seminal event. Whatever happened ruptured whole groupings of the family for decades.

My mother once told me that the last time she saw Corinne’s brother and sister-in-law (Dr. Sanford Perlis, a psychiatrist in Westport, CT and Yale, and Vivian, his extraordinary wife), was at Moe’s funeral in 1952 (Moe was Corinne’s father). At the time, she was pregnant with me and Vivian was pregnant with Michael, exactly two months younger than me. These sorts of stories infuriate me. I just do not understand how generations can be made to carry on with some ancient grudge. Not all in the family did. My mother’s brother, Joe, who took over the family jewelry store in Toldeo, never bought into the nonsense.

As many readers know, Christie Hefner is a lifelong friend. In the early 1990s, I began to hear stories from her about the new publisher of Playboy, my second cousin, Michael Perlis! She had very good things to say about him. She sent me a November 22, 1992 New York Sunday Times profile of Mike which made me ponder reaching out to him.

At the end of 1992, Dan had a big client in New York City. We found a sitter to stay with our young children and made plans to celebrate my 40th birthday in the city. We got tickets to see Gregory Hines in “Jelly’s Last Jam” on Broadway, made reservations at several wonderful restaurants, and visited old friends. I visited art museums and galleries during the day while Dan was with his clients. I flew home on Dec. 10, my actual birthday, but I’d had a wonderful visit.

Christie had moved the publishing part of Playboy to New York at some point, so Michael was based there. I mulled over the idea, then called his office after arriving on Monday, December 7. I knew he’d heard about me through Christie as well. I left a message with his secretary that we were staying at the Waldorf and would love to meet him for a drink. It was time to end the family feud. He called back within the hour and we made plans to meet the next afternoon at the bar at the Waldorf.

We had the most marvelous time. He was engaging, interesting, well-traveled, wanted to know everything about us and our family. He told me he had visited Bialystock while starting up the Polish edition of Playboy; he found scant remnants of a Jewish community. We clicked in so many ways. It felt like coming home. At the end of our time together, he said, “You should look up Sue. You’d really like her.”

I pondered his words and wondered how best to do that. She just lived one town over, but this was long before Google made it possible to look her up online. I finally got her mother’s address from a cousin and wrote Corinne a letter. “My mother may be crazy, but I am NOT! I would like to get to know Sue. Could you please send me her address and phone number?” Corinne responded with a very nice note and Sue and I have been friendly ever since, attending our kids’ b’nai mitzvot, grandkid’s brit milah (which was the last time I saw Michael), or just having dinner together. COVID has taken its toll, and of course, we are gone all summer, and now are spending lots of time in London. Sue and her husband Rich now have four beautiful grandchildren, so do lots of babysitting. No one is accessible as we were before. But it is still lovely to have a cousin just one town away. And long ago she confided in me that as her father, who died long ago, grew increasingly incapacitated, my father occasionally gave him ride to his office downtown, unbeknownst to the rest of the family. My father, kind man that he was, also did not buy into long-ago family feuds.

And I finally got to meet Michael’s parents in 1993 at one of the bar mitzvah’s. They lived in Westport, CT, where Sandy was a well-respected psychiatrist who passed away a year later. I went to his funeral. The concert master of the BSO played at the funeral. 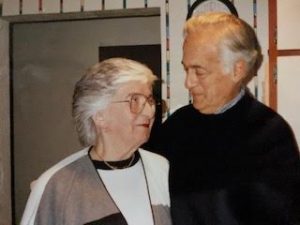 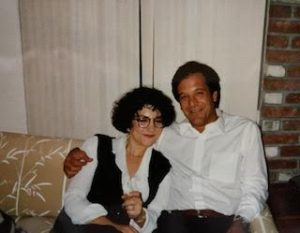 His wife, Vivian was an accomplished harp player, but was busy raising three children. She worked in the Yale Library, where she had the idea to do oral history on some of the local distinguished musicians of the 20th century. She began with Charles Ives, moved on to Aaron Copeland (and wrote his definitive biography), was working with Leonard Bernstein at the time of his death. She proved the value of oral history. She invented an important part of history. 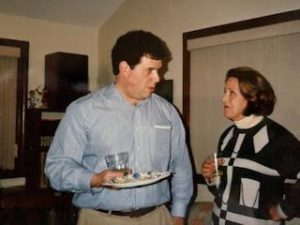 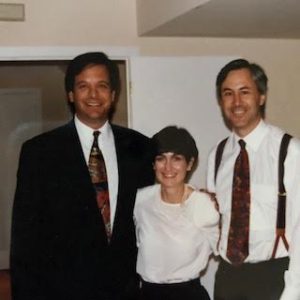 Michael and I went through a period of closeness, but have drifted. He’s gone through divorce and remarriage, several important jobs. He will be 70 on February 12 (my brother’s 75th birthday), two months after my own 70th birthday. But I know he’s there and when we do see one another, the closeness of family remains. No more family feuds to get in the way! Not ever!

14 Responses to Passed Down Feud