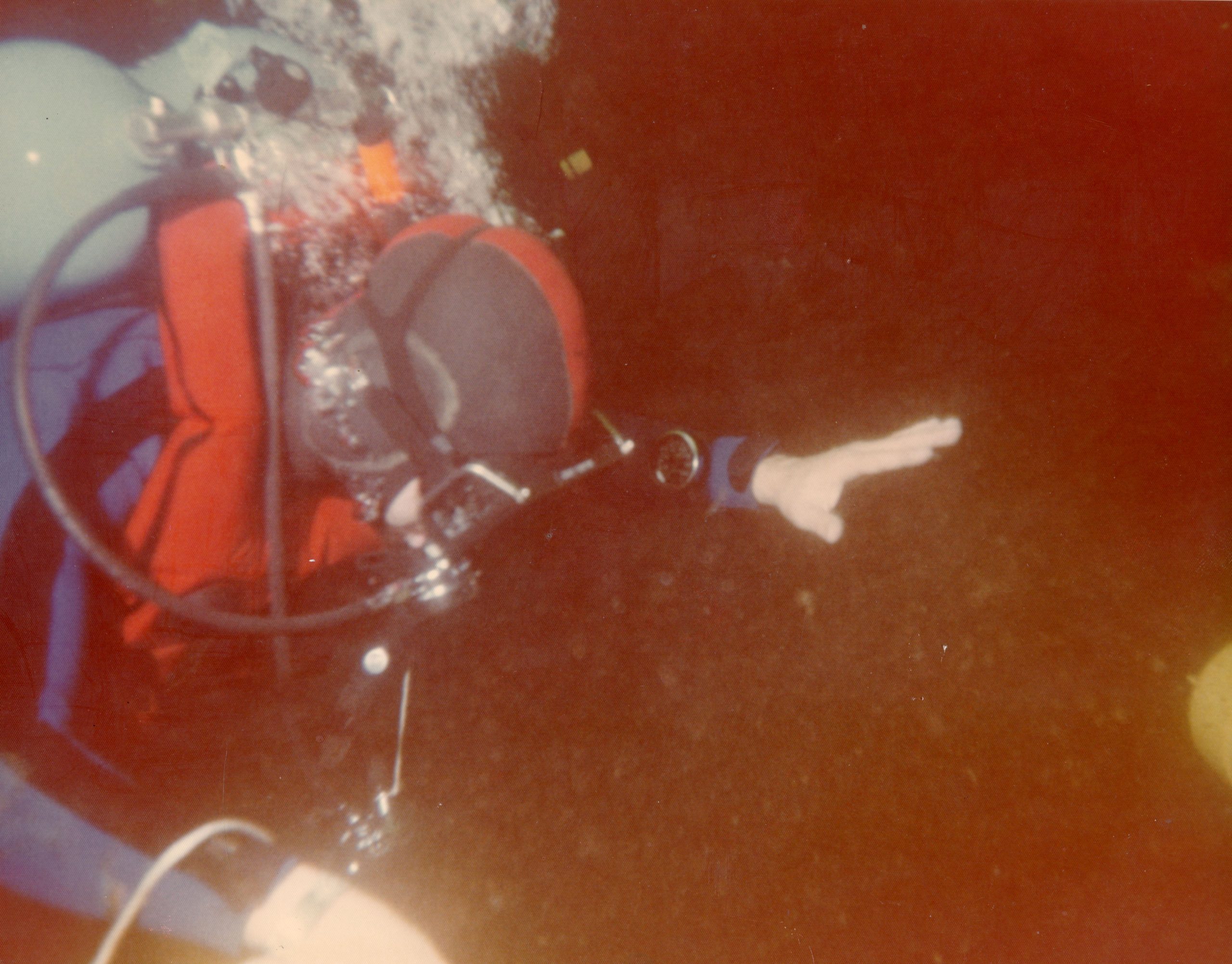 Me diving on the Stolt Dagali in September, 1975. In eight months, the depth gauge on my left wrist would pay for itself many times over.

On May 23rd, 1976, at 7:15 PM EDT, my friend Mark and I exited the dive boat Deep Adventures to explore the wreck of the Maurice Tracy, which is located about five miles off of Lavalette, NJ, in seventy feet of water. The sea was calm, the air temperature fifty degrees. I am sure the water was much colder. I know these details because I still have my old dive logs, the only sort of diary I ever dared keep. This was my thirty-sixth dive, my fourth wreck dive and my first night wreck dive.

We were now very lost, and out of time.

There was still plenty of light on the surface, but as we began our descent to the wreck it darkened quickly; the sun was low in the west, so most of the light reflected off the interface between air and water. We followed the anchor line down to the wreck. By the time we reached the bottom, it was fully dark. Luckily we each had a pair of powerful lights. We took note of where the anchor was tied in, and went exploring. We hunted lobsters among the scattered steel plates, nooks and holes, but I don’t record that we found any. We peered into openings in the wreck, swam around the machinery that was lying around. When we shined our lights out into the sea, we could see only blackness. Open water diving at night requires you to keep a firm hold on your imagination.

The no-decompression limit at seventy feet is fifty minutes, so we would have started our return trip back to the anchor line at around forty. We reversed course, swam back to the anchor line…and missed it. The wreck ended in blackness. We turned around again, knowing it had to be somewhere near. Our lights, now seeming so feeble, probed the darkness. Still nothing. All you see at night in greenish North Atlantic water is a narrow tunnel of light going out maybe ten feet before it is absorbed. There is no peripheral vision. We were close, but we had seemingly not paid enough attention to landmarks. No anchor, no safe line to the surface. We were a bit lost.

And time was not on our side. We were approaching the no-decom limit, after which we would need to make a decompression stop at ten feet. There are techniques to do that without having to find the line you came down on, but we had neither the equipment nor the training. We’d have to surface without the line, through the dark and now menacing sea.

We each grasped the other’s left arm with our right hands and began what we hoped would be a nice, calm, properly slow trip to the surface. Once we got there, we’d deal with having to maybe make a longish swim back to the Deep Adventures.

Things seemed to be going well until our fin tips touched sand.

As usual, we had let most of the air out of our buoyancy vests to avoid shooting to the surface in the dark, which could lead to the bends or, worse, an air embolism, which is usually fatal. But with no line, no visual clues as to our progress and no reserve buoyancy, we had instead gently drifted back down to the ocean floor. The current had swept us completely off the wreck.

Mark and I stared at each other, eyes wide through our dive masks. We were in real trouble now. We were very lost, and out of time. We were nearly at the decom limit, and our air supplies were getting low..

I could feel panic trying to take over as adrenaline entered my blood. My immediate self-preservation impulse was to inflate my vest and start kicking towards the surface; Mark would have to fend for himself. It took every ounce of my will to quash that immoral and almost certainly lethal idea. We’d have to think our way out of this one, as a team, or quite possibly die.

Luckily Mark was my equal in skill and experience. He was as scared as I was, but he also fought it off. We mutually held up one hand, palm out; “wait.” And held up an index finger; “one minute.” We scanned around with our lights and saw only sand. We had no idea how far off the wreck we were, or in what direction it lay. There was just white sand and black water. A quick check of watches and air gauges; bad news.

And then I had an idea. I lit up my depth gauge with my light, tapped it emphatically with a finger and gave the sign for “up.” Mark caught on immediately. We’d fly on instruments.

I grabbed Mark’s arm again, and he mine. We started swimming upward, eyes locked on my depth gauge. If our descent started to slow. we kicked a bit harder. Alone together in the darkness, we watched that needle spooling counterclockwise. Sixty, fifty, forty feet. We kept kicking, steadily. Twenty. At ten feet I turned my light upwards and saw the silvery reflection of the surface. A few seconds later and we emerged into the near darkness. We spun around and saw the Deep Adventures, deck and cabin lights bright in the last faint light of the setting sun, closer than I had dared to hope. Home.

We put some air into our vests and swam towards the ladder. A couple of minutes after we surfaced, we were handing our tanks and weight belts off to the waiting crew members and climbing aboard. No one seemed to have noticed that we had not come up in front of the boat.

After removing our masks and hoods, Mark and I just stared at each other. We said little, but we knew. We knew how near a thing it had been. We smiled, and then we laughed.

We had overstayed the no-decompression limit by two minutes. Technically we were bent. But the decompression tables are empirical, statistical. Some percentage of divers will get bent without reaching the limit. Some will get bent right at the limit. And some will get lucky. We were two skinny nineteen year olds in the kind of shape that nineteen year olds take for granted. We had also surfaced in a slow, controlled manner, which allows some of the nitrogen dissolved in your body to out-gas before it forms bubbles large enough to matter.

And we got lucky.