Forgive the double-post, but reading other people’s dating tales shook loose a few more memories of my own dating experiences. This particular recollection was prompted by Betsy Pfau’s story of her date with Gordon. Both of my stories on this prompt deal with fear. I don’t think that most men realize that a date can be a dangerous thing in a society where men are certainly not discouraged from taking what they desire, by force if necessary.

Boticelli could not have painted an angel more lovely than Angela.

A hot afternoon in late summer of 1972, just before the start of my sophomore year in Bayonne High. I was playing tennis with Elvira, in pursuit of Elvira. It wasn’t going well. I sucked at sports in general, and Elvira was a pretty good tennis player. She also turned out to be one of those people who is most palatable in small doses. Not a bad person at all, smart, funny and pretty, but not right for an introvert like me.  Preparing another rocket-like serve, she paused and said “Hi, Angie!” to someone who had come up to the fence behind me. I turned around…and time stopped. It sounds hokey, but testosterone is a hell of a drug, and my blood had just been shot full of it.

Elvira’s cousin Angela remains, to this day, one of the most naturally beautiful women I have ever seen in person. She is one of only two* women I have known who never wore any makeup at all, and she didn’t need it. Any addition would be a subtraction. Max Factor would have taken one look at Angela and sought another line of work. Smooth olive Italian skin over high cheekbones, flushed and deliciously moist in the humid New Jersey air. A single dimple that appeared at the corner of her mouth when she smiled. A face to die for, framed by long, almost black and slightly wavy hair. Was she buxom? Was she thin? Was she shapely? I truly did not notice, and do not remember. You may have heard of “ass men” or “[breast] men”; I found out that day that I am a face man. Botticelli could not have painted an angel more lovely than Angela.

I must have squeaked out some sort of greeting, but I clearly made no great impression. Angela said farewell and glided away through the shimmering August heat, taking my still-beating heart with her. Thus is an obsession born.

Angela was a year younger than I, so she’d be entering BHS that Fall. My Elvira Quest had gone nowhere – I am unsure whether Elvira even knew of it – so I had no qualms about pumping her for information about her unfathomably breathtaking cousin. Armed with a locker number and courage born of burning hunger, I found her and did the improbable. I secured a date with Angela. We’d go see a movie that weekend at the old DeWitt theater.

A new movie had come out, a horror movie. I envisioned ectoplasmic spirits or suave vampires, maybe a werewolf, or a shambling mummy or two. A good old fashioned spook-fest. If I was lucky, Angela would get just frightened enough to need to snuggle close, maybe clutch my arm during the jump scares, or hide her eyes (large, brown pools of delight) against my neck.

I can’t recall which of us decided to leave, but we lasted about half an hour. Thirty minutes staring in shock at women being raped, mutilated, dismembered and immolated. I was mortified. Angela kept looking at me with sidelong glances, while keeping as far away as the seat would allow. This was not the plan; I’d hoped she might be scared, but not of me.

I tried to apologize, but the damage was done. A curt “goodbye” and she was gone. We never spoke again.

Elvira and I stayed friends, so I guess Angela never told her what a sick and depraved person I was.

*The other one is my wife Gina: 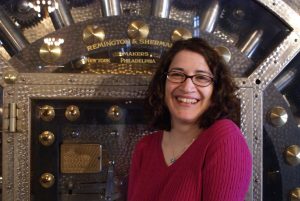 10 Responses to The Devil is in the Details