Prompted By Planes and Trains
7 comments.

NOT my family – we didn’t dress like this for flying, or play checkers

I took my first airplane trip long before my first train trip, unless you count New York subways as trains, which I don’t. But I love trains so much more.

I took my first airplane trip long before my first train trip, but I love trains so much more.

My first airplane flight occurred in the spring of 1961, when I was 9½ years old (wouldn’t be 10 until the end of August). My family went to Fort Lauderdale for spring break, as described in Remember (Walking in the Sand). I’ve heard about people getting dressed up for flying (as in the featured image), but I don’t think we did. My mother, sisters, and I may have been wearing skirts, because it wasn’t that common to wear slacks then. And my father might have been in a suit. But my mother certainly didn’t have a corsage! Note that the father in the picture is smoking a cigarette. It’s certainly possible that my parents were smoking cigarettes on the plane. I was used to the smoke and didn’t mind it. My father switched to a pipe after the Surgeon General’s report came out, but that wasn’t until 1964. 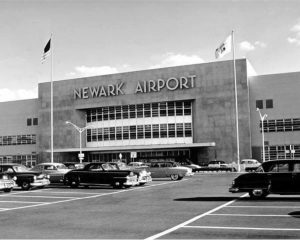 Newark Airport was tiny at that time, and parking was easy and close. Of course there was no security, so you only had to arrive a few minutes before boarding time. You walked out on the tarmac and up a metal flight of stairs to get onto the plane. I imagine we checked our luggage, I don’t think anyone carried it onto the plane in those days, but I don’t have a specific memory of it – I was only 9½, and I’m sure my parents handled all that. I may not have even had a separate suitcase. Of course we were served a meal on the flight, with real silverware. We might have complained about the quality of the food, not realizing that some day we would wish we could have that lousy airline food back again, instead of just a package of pretzels.

After that Florida trip, I flew to Michigan for three summers in a row, in 1961, ’62, and ’63, to go to summer camp. This trip involved changing planes in Detroit, because there was a large plane from Newark to Detroit, and then a smaller plane from Detroit to Traverse City. The first summer, when I was about to turn 10, I went  with my sisters, who were 15 and 17, and were also going to the same camp. That was the last year they went though, so the other two years I was on my own. I don’t remember whether I was nervous about traveling by myself or not, so it couldn’t have been too traumatic. I probably didn’t have much luggage on any of those flights, because we always sent a big trunk to camp ahead of time with whatever clothes and other items we would need.

As a result of all these trips, I was pretty blasé about flying before I was twelve. I do remember though, that I always sat in a window seat and enjoyed watching the propellers as the plane was taking off. (As I recall, there were men who came out and gave them a spin to get them started.) Then at some point there came a trip where I noticed that there were no propellers on the wings of the plane I was in, and I got a little panicky thinking that the propellers had fallen off. I’m not sure when that first jet ride was. Someone reassured me that we could make the trip safely without propellers, and they hadn’t fallen off, they just weren’t needed any more.

My first train trip was a long one, four days from Vancouver to Montreal, in August 1970, just before my 19th birthday. This was described in my story Planes, Trains, and Automobiles on the Hitchhiking prompt, because I hitchhiked from San Francisco to Seattle before getting a ride to Vancouver to take the train across Canada. I fell in love with train travel then, despite sitting up for the entire four days and three nights. It would have been more comfortable in a sleeper car, but probably not as much fun.

Since that time, I have taken many train trips in Europe. Two of them are described in On the Road Again (England and Wales, and then Brussels to Athens) and a third, through Spain, in Livin’ La Vida Loca. Train travel in Europe is so much better, and more prevalent, than in the US.

My only unpleasant train memory occurred in the ’90s, on an overnight train from Vienna to Florence. We did have a sleeper compartment, but we were informed that we were not allowed to lock the door because the conductor had to be able to come in during the night to check our tickets – maybe when we crossed the border from Austria into Italy. I had our Traveler’s Checks (remember those?) in a bag that was under my head like a pillow while I slept, and somebody came in and stole them! Didn’t take the whole bag, just took the checks out and left the bag. Guess it’s not always good to be a sound sleeper! It was pretty creepy to think about afterwards. But we didn’t lose any money, we just had to spend much of our first day in Florence at the American Express office while they contacted our Sacramento bank, which was tricky with the nine-hour time difference. 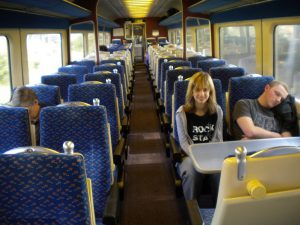 Here is the only train photo I could find, from a much more recent (2011) trip to England. We were traveling from London to Norwich to visit Sabrina, who was studying at the University of East Anglia. We had been flying all night to get from Sacramento to London, then had to hustle from Heathrow to the Liverpool Street train station to catch the train we had reserved.** That’s why two of our party are sound asleep! Trains are great for sleeping!

And finally, for those who have read the Harry Potter books, or seen the movies, here I am at King’s Cross Station on that same 2011 trip, trying to run through the barrier to Platform 9¾, which is how the students got to the train to Hogwarts. 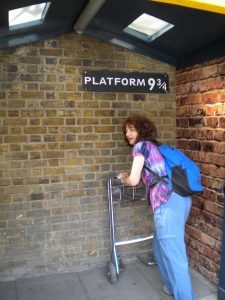 ** In the UK, it is MUCH more expensive to buy a ticket at the station than to buy it in advance. But if you buy it in advance and you miss your train, you are out of luck. You can’t transfer the ticket to a later train. Thank you British Rail!

7 Responses to The LocoMotion