Prompted By Drugs and Alcohol
19 comments. 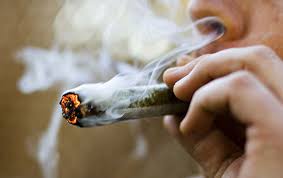 At first blush, writing about a history of drug use seems risky. But I am not running for public office (remember when Bill Clinton had to say that he didn’t inhale?), and now that my kids are grown, I don’t mind them knowing that I was a little wild in my youth. Can’t imagine that anyone else would care. Six years ago, when the prompt “Altered States” came up, I wasn’t ready to publish a tell-all, but now I’m okay with it.

I was first introduced to marijuana at a summer program I attended at Syracuse University before my senior year of high school. (See With a Little Help From My Friends, and  A Whiter Shade of Pale.) I thought smoking dope was great, much better than drinking alcohol. Also easier to get, because you didn’t have to show proof of age, like you did to buy alcohol. I continued smoking senior year (although only at my friend Amy’s house, because her parents were never home) and all through college. In college, everyone I knew smoked, if not when they first got there, certainly before they graduated. Absolutely everyone. No matter how straight they were when they arrived in Cambridge. Grass, and occasionally hash, were present at all the parties I went to, and made everything more fun and more intense. Ginger Baker drum solos were the best thing to dance to stoned. Movies were better stoned too, especially ones like Yellow Submarine and Woodstock. I occasionally tried mescaline and LSD and enjoyed them too, although they were a little scary because you took one pill and you never knew how wasted you were going to get or how long it would last. Once, when I was tripping, a friend invited me to go for a motorcycle ride with him, but I had the sense to decline. Even in my altered state, I knew I might decide it would be fun to let go of him and just go flying through the air, which would have landed me in the hospital or the morgue.

Internet picture, not mine

It wasn’t until I was in law school that I was exposed to cocaine. My first experience was like something out of Hollywood — we actually snorted it off of a mirror, through a crisp rolled-up hundred dollar bill. I loved cocaine because it made me so wide awake and aware of everything around me. Getting stoned (or getting drunk) usually led to my falling asleep, but with cocaine I could stay up all night. Once I graduated and got a real job, I gravitated to the other people in my office who were into drugs. It was a small but fun group to hang around with, and made the transition from school to work much easier. One of the interns had a side gig as a coke dealer, so he could always get some for any of us who wanted it. However, after I had known him for a couple of years, we were talking on the phone one night, arranging for me to buy some coke from him. All of a sudden, he addressed me by my full name, and then said “so I will bring it over to your house, which is at [my street address] at 7:00 tomorrow night.” I felt a chill go through me. Why did he say all those facts so clearly? He must be setting me up for a bust! So I said, “you know what? I changed my mind. I don’t want to buy anything after all.” He said okay, and we hung up. And after that, I never snorted coke again. I will never know for sure whether I would have been busted if I had gone through with the purchase, but it seems likely.

After getting married, my (first) husband and I would generally get stoned when we went to parties, and always when performing with his rock ‘n’ roll band, but once I had children I stopped. I missed it, but I knew I shouldn’t be in an altered state while caring for babies and then toddlers, or even school-age kids. 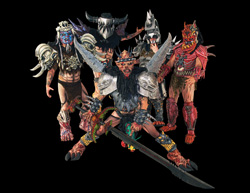 Over the next 25 years, I only smoked a handful of times, all of them on my trips to Cambridge. Unforgettably, at a Lampoon party with my son in 2010 (along with the heavy metal band Gwar). Also, starting in the 2000s, every five years at my college reunions, where there was always someone with a few joints at the dinner-dance.

Now, of course, marijuana (or cannabis, as they seem to prefer to call it) is legal in California and Massachusetts, the two states where I spend the most time, as well as 35 other states. There are billboards everywhere advertising dispensaries. I have done edibles with two of my kids, but I’m not a big fan, because it takes a while to know how high you are. Reminds me of acid and mescaline in the old days. You wonder, should you eat a whole cookie (or brownie), or just a half? And if it seems like a half isn’t having any effect, and you then eat the other half, will you suddenly regret it when it hits you over the head? Smoking – or vaping, which I have just done once – seems much more controllable. But in truth, I don’t do anything mind-altering very often any more. It doesn’t have the same appeal it did when I was young. As the t-shirt says, being twenty in the ’70s was much more fun than being seventy in the ’20s! 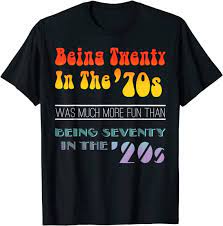 I don’t actually have this t-shirt