Posing for the Camera by Dana Susan Lehrman
200
(216 Stories) 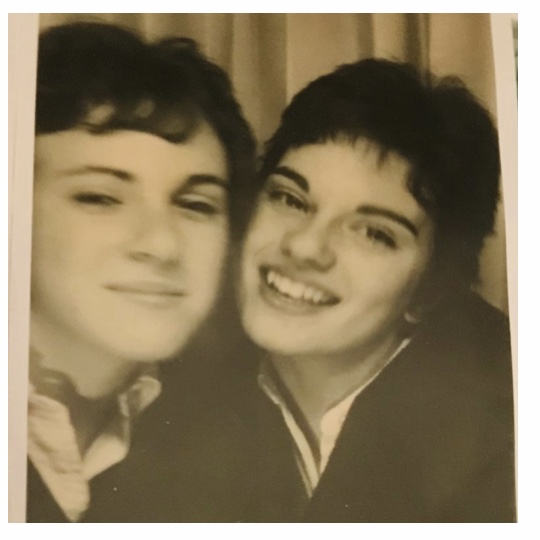 Before we all took selfies on our cell phones,  and before  “BFF”  and “besties”  were entries in the Urban Dictionary,  Stephanie and I were best friends posing for pictures in a neighborhood photo booth.   We were practically inseparable then and I’ve written before about our long friendship.  (See Postcards from a Secret Admirer)

We met in junior high and although we went on to different high schools and colleges we remained fast friends.  Then we both stayed in New York for graduate school,  and thus on the night of November 9, 1965 when the  lights went out in New York,  we were together at Georg Jensen,  the upscale Madison Avenue silversmith and jewelers.

I don’t remember why we were there —  maybe buying a wedding gift for a friend,  or window-shopping,  or maybe we just ducked in to get out of the winter chill.  But there we were in Jensen’s when suddenly the store was plunged into darkness.

I don’t think Stephanie and I worried about terrorism  –  it was in those innocent pre-9/11 days – and we were soon assured the blackout was an electrical failure.   In fact in the following days we all learned to refer to the “grid’.

And rather calmly as I remember we and the other shoppers held hands as we made our way out of the darkened store onto the street.   And then we had to decide what to do.

Stephanie was living in the Bronx then,  and I on the upper westside,  and with no buses or subways running neither of us could get home.   We decided to surprise my great-aunt Miriam in her midtown apartment,  we walked the several blocks to her building,  and much to Miriam’s delight we spent the night.   (See Aunt Miriam, Diva)

Looking back I believe Stephanie and I saw the blackout as an adventure,  and we didn’t know what dire national disasters – assassinations,  race riots,  bloody protests,  and foreign and domestic terrorism –  were yet to come.

We were young and careful then,  just two good friends who loved posing for the camera in a Bronx photo booth!

24 Responses to Posing for the Camera