My Father, the Outsider Artist by Dana Susan Lehrman
200
(243 Stories)

Prompted By What My Father Told Me
22 comments.

My father Arthur was a wise and quite a wonderful guy,  but I don’t remember him doling out wisdom or advice very often.  Rather he taught by example – he was a man of integrity,  warmth,   and an overwhelming kindness,  although he also had some rather annoying idiosyncrasies!    (See  Saying Farewell to a Special Guy,    My Dad and the Word Processor,   Six Pack   and  My Blessings)

However there was one thing he did tell us repeatedly –  “Do what you love and do it passionately.”

In fact he himself loved doing a variety of things and he did them all passionately.  Medicine was his profession and he loved practicing it with no intention of retiring,  even after he turned 80,  a fact that was much to my mother’s regret –   she envied all their happily retired friends who were able to freely travel.  But of course she wouldn’t – and couldn’t – dissuade my dad from doing what he passionately loved to do.

And my dad also loved classical music,  and following his own advice,   pursued it with a passion.   He not only amassed a vast collection of classical LPs,  but was a self-taught pianist and played Beethoven and Chopin by ear.   In my mind’s eye I can still see him sitting at our Knabe baby grand,  his fingers moving over the keys and his beautiful music filling all the rooms of the house.

And my father was also passionate about making art,  although it was my mother who was the trained artist in the family.   Art had been her college major,  she then studied at New York’s renown Art Students League,  and later taught art in high school.   (See Still Life , Art Imitates Life)

But at some point my father,  who always loved to doodle and sketch,  decided to try his hand at oil painting and made several lovely street scenes and landscapes. 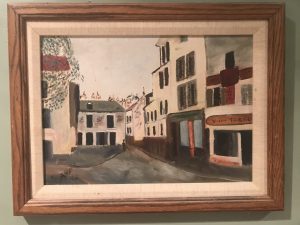 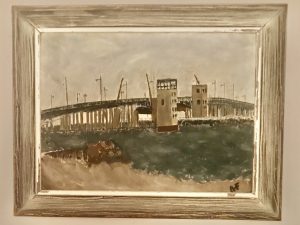 He also began making what he called his “constructions”.  He started collecting found and discarded objects that he used to make models of famous buildings and structures he built in a little workshop in our basement.  Although truth be told,  the objects he used weren’t always found or discarded – some he unapologetically confiscated!!  (See My Beloved Basement)

My dad was very proud of his constructions,  but they became a minor bone of contention between my parents.  He wanted to display them all over the house,   and although my mom found a spot for one or two of them – they were all rather large –  she insisted the others remain in the basement.   He relented,  but whenever friends or family visited my dad invariably invited them down to the basement to see his artworks.   They would shower him with praise for his talent and creativity,  while I must confess my mother,  my sister,  and I usually rolled our eyes.

Then one day the hospital administrator where my dad was on staff invited him to exhibit his constructions in the hospital library.  The exhibit was billed as  “outsider art”  which by definition is original art created by an untrained,  self-taught,  idiosyncratic artist –  my dad exactly!

During the two weeks the exhibit was mounted,  my dad walked around with a huge grin,  and prized the written comments left by visitors who admired his work.

We have one of my father’s pieces in our apartment – a 3-foot long model of an iconic cable-stayed suspension bridge,  and like all the constructions he had entered in that exhibit,  he had used a label maker to identify it.

Not only was my dad passionate about all he did – as he advised us to be –  he was also scrupulously honest.  And so not to mislead anyone who saw it,  he had labeled our piece   “BROOKLYN BRIDGE – REPLICA”! 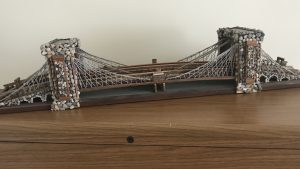 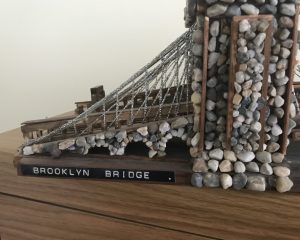 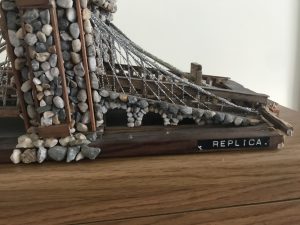 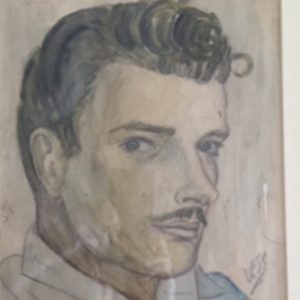 22 Responses to My Father, the Outsider Artist